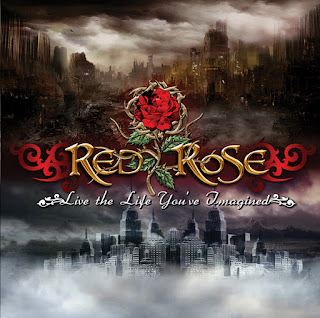 (c) 2011 Barkerteam/Scarlet Records
Leve Laiter--Vocals
Elnur Aliev--Guitars
Deion Kristen--Keyboards
Eli Reeve--Bass
Hailing from Israel, Red Rose, to my ears, is a bit more progressive, AOR-ish version of Helloween, incorporating big, soaring vocals (that sound more than just a little like Helloween's Michael Kiske), melodic-yet-powerful keyboards, and some excellent guitar work.  In fact, it is the guitars of Elnur Aliev that really keep my interest here, as if it wasn't for the harder edge that his axe brings to many of these songs, I fear the project would have drifted off into a keyboard-burdened progressive/AOR fluff album that reeks of potential but never delivers.  That is NOT the case here, as Aliev saves the day on numerous occasions and helps this young band deliver an album that is reminiscent of the late 1980's fledgling power metal scene combined with an arena rock sensibility.
Admittedly, I was a bit fearful upon hearing the very first track, because if the rest of the album had been this heavily dominated by keyboards, I would have shelved it without hesitation.  "Turn Back The Time" is not a poorly written song by any means, it is just done in a style that holds absolutely zero interest for me as it is just too keyboard-driven and, for some unknown reason, Aliev's guitars are relegated to little more than rhythm playing with no discernable solo to enliven the track.  Yes, folks...I was VERY worried about this album after this song.
"Name On The Stone" went a long way to disspelling those fears, however, as Aliev's chugging guitar work on the song kicks in instantly, giving a completely different sound and life to this song that that of the previous track.  "The Last Drop" is a bit more mid-tempo, but it is another solid song with an excellen guitar solo which I found very reminiscent of the solo on W.A.S.P.'s song, "The Crimson Idol".  It is not a rip-off, but it has a very similar feel...which, trust me, is a very good thing to my ears, as that is one of my favorite guitar solos in all of hard rock and metal.  "Gone With The Sunrise" is another edgier, harder rocking track with some very nice guitar work and some solid bass and drum work in the background, and once again, the Helloween similarities are glaring to me.
The title track veers almost fully into 80's AOR/arena rock territory, leaving behind the power metal stylings of the first handful of songs, and it works very well.  In fact, this is a style that I think fits the band very well, with the music reminding me a bit of Pretty Maids from that same late 80's/early 90's era.  Perhaps this has something to do with the fact that the album was produced by none other than Tommy Hanson, producer of what many consider to be the Pretty Maids' definitive album, Future World, along with producing...you guessed it...Helloween!  Sure, there is still a keyboard flourish here near the end of the track, but overall, this is a much more straight forward rocker that I wish the band would have used throughout this disc.
From here we go back into quasi German power metal mode with "Dreamer", which again reeks of Helloween worship.  "Tough To Love" is a short but gritty number that takes us back to more of a straight ahead classic metal feel, although we now have a bit of Hammond organ-sounding keyboard mixed in along with some great rhythm work from Aliev.  The album closes with an acoustic song, which I honestly felt should have been left off the album as it doesn't fit anything else the band recorded here.  Now, if there were two or three more tracks to follow, I wouldn't have had an issue with the inclusion of "When The Sun Goes Down", but to close an otherwise fairly hard rocking album in such a bland fashion is a considerable let down, especially considering how short the album is.

With just 8 songs here which add up to just a hair over 35 minutes, this album can't afford to have throw away songs.  Unfortunately, I find myself skipping both the first and last tracks when I put this album in, which cuts down on my enjoyment of the album.  Still, I am left with six tracks of solid German-inspired metal that has Tommy Hansen's production skills just dripping from them, which is a good thing for fans of Pretty Maids, Helloween, PC69, Jorn, etc.  If Red Rose can take what they have learned here, come up with a solid ten or eleven songs, and really let Aliev's guitars come rocking through at full-force, this band is on to something, even if that something is not overly original or ground breaking.  A solid debut effort with just a couple of hiccups; unfortunately, those hiccups come at the very beginning and very end of the album, which is a distraction, to say the least.

One note to those seeking out Red Rose:  this is an album which I have only found on import CD sites and it is rather costly, sometimes fetching between $30 and $40.  Keep this in mind when hunting down an album of such short playtime....  Check out their stuff on YouTube or elsewhere on the 'Net before you drop any serious coin on this disc.

Rating:  Rock this at a very promising 6.5 and keep Red Rose on your list of bands to watch out for in coming years.

Back To Reviews Index
Posted by arttieTHE1manparty at 11:53 AM