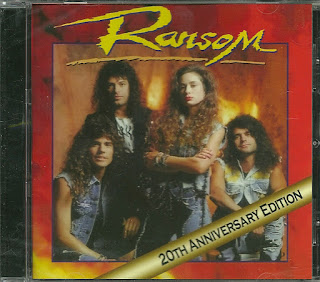 Ransom was, quite likely, the best of the fully-female fronted Christian bands of the "hair era".  Not only did Lisa Faxon have some incredibly strong vocals, the band, as a whole, was very talented, with guitar player Tony Ortiz being one of the better axe slingers you have probably never heard.  Ciado and Kantor are no slouches on their respective instruments as well, and, as a result, Ransom the band put out a very good album in Ransom...the...uh...album.

Stylistically, the album is very much in the vein of the Sunset Strip bands of the time, often compared with bands like Ratt or even Dokken at times, and when they are rocking out they are considerably more powerful than a band like Vixen or Femme Fatale.  Personally, I think the band's sound is far more in line with a band like White Lion than anyone as they are extremely melodic and Ortiz has a definite Vito Bratta feel to his playing.  This is evident right from the start with the very hook-oriented "Lasting Love" which, after a keyboard intro, sets the album off rocking right from the start.  There was actually a video that was recorded for this song (I think it can still be found on YouTube) that I think would have been a nice addition to this package, but that is of minor importance.  What is important is the energy that this band put into the music here, with Ortiz ripping off a very catchy lead and Lisa's vocals searing their way through this excellent opener.  "Rumors" is another great rocker that I think a lot of people will swear they have heard before, especially when the guitars kick in, as it is an excellent song that really encompasses the entire Hollywood sound.

The next track is an anti-suicide ballad called "Memories Of You".  The song has a very powerful message that Lisa really wraps her silky vocals around and, as per usual, Ortiz layers in an excellent, emotional solo.  "Fool That I am" does just that...fools the listener into thinking they are getting another ballad with the intro, but it eventually kicks into a song that, at least based on the intro and guitar lead-in, will have people thinking they are hearing White Lion's "Wait".

"Break Into Darkness" is another stand-out track featuring some killer double-bass by Kantor, and "Etched In Stone" has a scorching guitar rhythm and a pretty heavy bottom end that really grabs the listener.  Both also give Faxon a chance to add a bit of snarl to her voice, which is pretty cool and gives her a more distinct sound than anything Vixen ever put down.  The same can be said of "Fallen Angel", which is another good, up-tempo rocker, although it is a bit more in the classic hard rock vibe than the more metallic approach taken on other songs.  Meanwhile, "I'll Never Leave You" is a ballad that has that real lighter-in-the-air feel that would have gone over extremely well live, I think.

There are a couple of minor misses here.  "Tonight" is just too sugary for me musically, (think "Honestly" by Stryper...same icky, syrupy feel...including the tinkling keyboards) but it does feature some very strong Christian-themed lyrics that don't venture into the preachy territory that many secular fans would turn off immediately.  "Your Broken Heart", while not bad, doesn't do a lot for me and sounds like the most obvious stab at radio, although it does contain another KILLER solo by Ortiz.  "When I Die" is another strong song lyrically, but it is something of a throw-away track for me as it is completely acoustic and is very...VERY...short, at just over 2:30 on the clock.

The best part of the re-issue is the bonus tracks which were taken from the 1988 demo Once And For All.  In all honesty, these four songs are the strongest that Ransom ever recorded, in my opinion, and it is very easy to see why the band got signed based on the strength of this demo.  "Sin Killer" is a full-bore rocker that really showcases Faxon's vocals.  "Sticks And Stones" has an incredibly catchy chorus and some very strong fretwork from Ortiz, however there is a bit of tape warble that comes from the tape that this was taken from.  It does not make the song unlistenable, and actually adds a bit of charm to it for old-school fans like myself, but it is too bad that a more pristine copy of the demo couldn't be found for remastering.  "To Be Like You" is a ballad that, as with "Sticks And Stones" suffers from the source tape, but again shows an extremely talented band that, with more label support, likely could have gained airplay at the time.  The last song on the album is an unlisted demo track called "All My Heart".  Taken from the pre-Ransom days when the band was called First Aid, this is a mid-tempo rocker and is of much better source quality than the previous two songs.  It is an acoustic-based number at the start, leading the listener to believe they are in for another ballad, but the juice kicks in and Lisa and the Boys set to rocking again, albeit never cranking the tempo up full-bore.  I am not sure why this track is not listed on the disc or the tray insert...I really should ask my friend Bill Bafford of Roxx Productions who was one of the executive producers on this disc.

Incidentally, for collectors who may seek out the original 1991 version, the cover artwork is identical, minus the "20th Anniversary Edition" banner that runs across the lower right-hand corner.  Howver, I would STRONGLY encourage you to pick up the reissue.  The eleven songs have all been remastered and have far superior sound, plus the addition of the demos is a great touch.  The of both have the lyrics to all eleven of the originals, and each has one picture not found in the other (the reissue has a black-and-white band picture, the original has full-color individual pictures).  The reissue does not include any of the thank you's, old fan club information, or booking information.  Those things would have been nice to include, but are not essential.  Some folks may also be turned off by the fat that the new version doesn't have any songwriting credits, but people, let me help you out:  Lisa wrote nearly all the lyrics and Ortiz most of the music, with a couple of credits also going to Ciado for the music.  Overall, this is an excellent album that not enough people have had the opportunity to hear.  The most unfortunate thing about how good this disc is how much of a letdown the follow up is...but that's for a later review.

Rating:  Crank this to a very solid 8!

Posted by arttieTHE1manparty at 9:53 PM