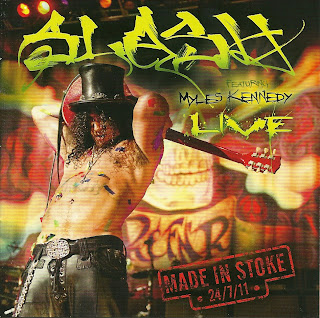 (c) 2011 Armoury Records
CD 1
CD 2
I am not really much of a live CD fan, to be honest.  Generally, I think that most of these CD's leave me wanting for one reason or another.  Either the mix is bad, the performances are bad, or it is painfully obvious that the music has been over-dubbed or touched up in the studio to the point that the music no longer sounds live.  Additionally, most live CD's leave out the songs I really want to hear in favor of the "hits", which is, to be fair, the obvious move for artists and labels who are trying to move product.  I am happy to say that, for the most part, Slash's new live CD surpasses my expectations in pretty much every area and that I found myself really enjoying this 2-disc live set which features Myles Kennedy of Alter Bridge on lead vocals.

With so much material to comb through, I think Slash did a pretty good job of including something from just about every album he has ever done, regardless of the project.  "Ghost", "By The Sword", "Promise", and of course the Kenneydy co-writes "Back To Cali" and "Starlight" are all taken from his recent solo effort, "Slither" comes from the first Velvet Revolver album, "Been There Lately", "Mean Bone", and "Beggars & Hangers On", are all Snakepit songs, and the rest...well, anyone who doesn't recognize the tracks from the GnR catalog probably won't bother picking this live set up anyway.  I do think a couple more Velvet Revolver songs could have been included, especially "Fall To Pieces", which I would have loved to have heard Myles tackle, but there are going to be favorites of everybody's that are left off, right?

The GnR selections are particularly strong, and it was interesting to hear Kennedy's more traditional, blusier singing style as opposed to Axl's trademarked screeching howl on songs like "Nightrain" and "Rocket Queen".  Not surprising, however, was the way that Kennedy was able to take on a song like "Patience", or even "Mr. Brownstone", as both of these songs lend themselves more to singing, at least in my opinion.  Of course, "Sweet Child O' Mine" and "Paradise City" had to be included, and Kennedy pulled both of these classics off well.

Much to my surprise, Disc One starts off with a song a lot of fans probably don't even know, as it is a much underrated Snakepit song called "Been There Lately", which I think really showed the strength of the entire band right from the start.  Jumping right into "Nightrain" was probably a good idea as this gave the crowd something extremely familiar following something maybe half of the audience knew well.  From there, Slash and Co. jump back into lesser known material, either with new stuff from his solo album, or with Snakepit songs.  "Civil War" was an interesting choice of Guns songs to include, in my opinion, as I always felt that Axl's attitude and vocal approach were a huge part of this song.  Myles does a very good job of taking a powerful song and adding to it, especially when he uses his lower register vocals.  An unexpected inclusion here turns into quite possibly the best song on Disc One, although the extended "Rocket Queen", "Ghost", and "Starlight" are all done very well, also.

Disc Two is the stronger of the two, in my opinion, as Slash spends more time on classics and less on the newer stuff.  A huge part of this is the whistle-free "Patience" (Myles tells the crowd to whistle if they want to because he can't...), the only Velvet Revolver track, "Slither", and the two biggest songs in the GnR catalog, "Sweet Child" and "Paradise City".  This disc also features the MONSTROUS guitar clinic Slash puts on for the listener, but more on that in a bit.  I was glad that he found a way to incorporate "Beggars & Hangers On", as I have always felt that this was one of the best Snakepit songs on record and I always wished that Guns N Roses would have had the chance to record it live.  While this is not GnR, it is really cool to hear this track in a live setting and I think Myles nails the vocals.    Now...about that guitar solo....  Guitar enthusiasts will probably really find themselves utterly drooling over the 10:31 long "Godfather Solo" that flows right out of "Patience".  There is very good reason for this slobberfest amongst listeners, as Slash really runs the gamut as far as styles and sounds on this solo. Long bluesy sections, short bursts of frenetic speed, and some flat-out rocking sections (which include the full band at times) really make for an interesting listen here that is leaps and bounds better than so many of the "hey, look at me run the fretboard"-types of solos that we are exposed to on live albums and in concerts.

One thing to note is that just because you have heard most of these tracks, especially the GnR and VR songs, a thousand times does not mean that you can predict 100% accurately how they are going to come off in a live setting, as Slash does not stick to the tried-and-true solo in each of these.  This is particularly evident in "Rocket Queen", for example, where he deviates considerably from the solo that is on the record.  In fact, very few times is the song performed to the exact note the way that it was originally put to tape, so I get the feeling that a lot of this is actual concert material and not studio overdub.  There are a couple of spots where it sounds so clear that I have my doubts as to the "live" nature of the song, but not many, so I am pretty pleased with that much of it.

One thing I don't like is when lead singers "take a break" and let the audience take over the vocals.  Kennedy does this...a LOT...especially on the Guns tracks here.  I do understand why, as the people love these songs and they love to sing along...we all do it at concerts.  However, if a band knows they are recording live, I wish the singer would do the majority of the singing, even on crowd favorites.  This is a relatively small point, however, but when you have a singer of Kennedy's ability, I really want to hear him sing and not Drunk Joe and his 18 buddies that are able to scream louder than anyone else around in the crowd, know what I mean?

The liner notes, while fairly extensive, aren't really all that interesting, but I guess they are a good read one time.  There are a couple of pictures included as well.  There is an import version of this set available that also comes with a DVD, but as someone who is not a fan of watching his music (I've said this many times...), I don't feel compelled to track it down.

All in all, I have to say I was pleasantly surprised with this package, at least musically, and I think there is a good chance that I will pull this out more frequently than the live Guns N Roses album from several years back.  It's a relatively inexpensive set if you look around (I've found it for under $12.00 in a couple of places), so fans of Slash, Guns, or just live albums in general would do well to pick this up.

Rating:  Crank this to 7, which is pretty high praise for me when rating a live disc.