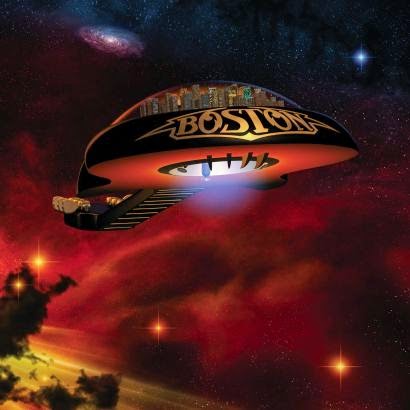 It has been 11 years since one of the truly classic American hard rock bands cranked out an album, and that disc, Corporate America, met with mixed results, to be kind.  In the years since that record, lead singer, Brad Delp, committed suicide, the band disbanded...then reformed with Stryper's Michael Sweet on vocals...and then essentially disbanded again before releasing this, their 6th studio album in 38 years.  I say "essentially disbanded" because, despite the name on the record, this is a Tom Scholz solo album for all intents and purposes, and you need look no further than the musical credits I listed above to understand why.

Like so many other great bands of the 70's and 80's, Boston has always struggled to live up to their initial success.  Few people in the hard rock world will deny the absolute greatness of the first two Boston albums, and that shadow of success has been a long, dark one that Scholz has never fully emerged from.  Sure, there have been hits here and there, but they came largely at the expense of the classic sound, as tracks like "Amanda" sound nothing like the classic rockers "Don't Look Back",  "Smokin'", "Rock N Roll Band", and "More Than A Feeling".

With Life, Love & Hope. it seems that Scholz tried very hard to please fans of all incarnations and eras of the band, bringing together a wide array of lead singers, song styles, and structures.  When it works, it works very well, but when it misses, it is often hard to listen to.

Surprisingly, the most classic-sounding tracks on this new batch of songs are songs NOT sung by Brad Delp.  These are the album opener, and lead single, "Heaven on Earth", which features Tommy DeCarlo on lead vocals and Louis St. August of MASS on backing vocals, along with Scholz, and "Life, Love & Hope".  I say surprisingly because with the presence of Delp on a few of these tracks, it would seem that those might be the most "Boston-like" songs, but I'm telling you, the moment that classic Boston guitar tone cranks through the speakers on "Heaven on Earth", I was immediately taken back to those first two records, and for the most part, the song lives up to those feelings of nostalgia, albeit in a bit cleaner, slicker produced package.  This is a Boston song, no doubt, and I am sure many fans were very excited to hear this song when it was released if they are fortunate enough to have a local rock station that still plays classic bands.  The same can be said for the title track, which has that great tone, some Hammond organ, and a dual guitar solo that just screams 70's arena rock!  The Delp-fronted "Didn't Mean To Fall In Love" is also a throwback to those classic days, feeling like the tamer little brother of "More Than A Feeling".  "Sail Away" is a pretty good song, mixing some classic song structures with more modern instrumentation and effects to mixed results, but once that big chorus hits, it feels like Boston's mid-80's output.  So, if you are keeping track, that's the first 4 songs on the record all receiving very good to great ratings. (I don't count the instrumental, "Last Day of School", which is okay, but come on...it's an instrumental!)   Not a bad start, huh?

Sadly, the wheels start coming off at this point...

"If I Were Love" is a dark, moody song with Kimberly Dahme on lead vocals.  This is, plain and simple, NOT a Boston song in the classic style; not at all.  The song is boring with no hook, no snarl, and little in the way of anything that resembles what we have come to expect from Boston.  "Someday" tries to recover the record, but this song feels like the Boston truck ran into a pop band's minivan, leaving a musical mixture spilled out on the road where passers-by honk and wave, and occasionally flip the bird, screaming for someone to clean up the mess!  Seriously, I think this COULD HAVE BEEN a great song, but it sounds incomplete, like its a demo or a garage recording that got stuck on the album to take up space.  It is all over the place, stylistically, and the inclusion of a misplaced harmonica solo does nothing to help decipher the musical direction of the song. "Love Got Away" finds Scholz taking the lead microphone position with less than amazing results.  He's not a horrible singer, but his range is severely limited, giving the song a flat quality that is not assisted by the relative blandness of the organ-heavy, oddly mixed music that has the drums basically buried at points and most of the guitars choked almost completely off, while the bass and a computerized-sounding high hat are the prevalent instruments in spots.

"Someone (2.0)" is a reworking of the song "Someone" from the Corporate America album.  With Delp on vocals, the classic Boston sound manages to rear its head for one final howl on this record, but on a track that would rate as 5th best on the record.  I will say this; this version is FAR superior to the version that showed up on Corporate America, so I'm glad Scholz resurrected it.  The other retread is the next song, "You Gave Up On Love", which was also on Corporate America...and which should have been allowed to die on that record.  Not a good version of a not particularly good song, and just not Boston to my ears.  I mean, come on...a flute solo?  Is this Jethro Tull?!  Ugh!  The album's closer is the piano-based semi-ballad, "The Way You Look Tonight" which tries very hard to capture classic Boston, but falls short, allowing the album to go out on a whimper rather than a snarl.  The song is too saccharine and bloated, with too many things going on OTHER than classic rock guitar to keep my interest at all.

As far as packaging goes, this is one of the high points (how sad is that?!), as Scholz includes all the credits, lyrics, and even the meaning behind each of the songs.  There is a picture of Scholz at the mixing board, along with an explanation of the meaning of the album (and an indictment of the music industry and the internet).  The cover art has that classic Boston feel, and various shots of the band in concert...along with some odd shots of space...fill the pages of the 16 page booklet.  This is a Frontiers release, so yes, its a cardboard package, and the worst kind: a slipcase that I am afraid will end up scratching the CD over time.  WHY?!

I want to like this record, as I have so many great feelings tied to the first two records, and even to a couple of songs on Third Stage.  But, like the band themselves say, this is about more than a feeling, and in the end, even those feelings of nostalgia and longing for a once-great band cannot overcome the fact that this new album is a disappointment for me.  I am sure there are some who will love the record, but I am not one of them.

Posted by arttieTHE1manparty at 10:09 AM