I LOVE RICH "Respect The Rich" 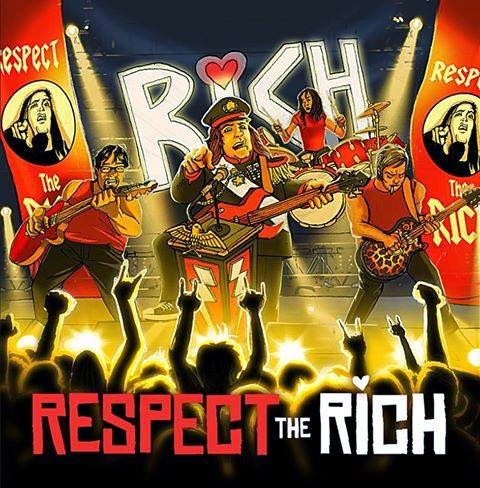 Chicago's I LOVE RICH are NOT what they appear at first glance, at least if the first glance is a look at the song titles.  I mean, come on...with songs like "(You're So Hot) I'm Gonna F**k You With The Lights On" and "If You Don't Take Your Clothes Off, Tonight's Gonna Suck", who isn't instantly thinking Respect The Rich is a punk rock record?  Anybody?  Anybody at all?  Exactly.  I was the same way.  In fact, I planned to dismiss this CD the second I gave it that first cursory listen that I give to EVERY CD that crosses my review stack.  Yep, pop it in, give it a spin, hit skip a couple of times, eject, and file away.  That was the plan.

Except it didn't happen that way...

Now, I'm not going to tell you that this CD is a constant spinner in my CD player, because that would be a lie.  I'm not going to tell you that I LOVE RICH are the saviors of rock n roll, because that would also be a lie.  But it would also be a lie if I told you that there wasn't something catchy and dang-near likable about this CD as well.  No, I'm not a fan of the "(You're So Hot)"'s full song title, and the chorus is every bit as repetitive and borderline moronic as you would probably guess it to be, but dang it, this band goes out of it's way to DARE YOU to not pump your fist a bit at their brand of anthemic, 70's KISS inspired, sleaze-dipped raunch n' roll!

No, I wouldn't really call I LOVE RICH a punk band, at least not in the Sex Pistols, Black Flag sense.  I guess you could draw some comparisons to the Circle Jerks and their 1985 album, Wonderful, as that album, much like Respect The Rich, contains several elements of hard rock and metal combined with rather inane lyrics and sophomoric humor.  However, unlike the Jerks, I LOVE RICH focuses a lot more on the 1970's classic rock-guitar-driven rock here, and less on the 80's hair metal-meets-punk, giving this mini-album a more sleazy feel than a punkish one.

The album's opener is a kind of surf-punk instrumental that I have to admit is pretty catchy and nicely played.  I'm not a huge fan of instrumentals as openers, but there's really no harm here.  But as soon as "(You're So Hot)" kicks in, it is obvious that I am in for a different type of ride than I had anticipated.  As I stated earlier, it is extremely obvious that these guys were raised on a heavy dose of 70's era KISS, with Rich even sounding quite a bit like Gene Simmons on several tracks.  Yeah, the lyrics are stupid, but man, this is a catchy song with a really nice classic rock guitar solo thrown in for good measure.  "Wake Up, Let Me Rock You" follows things up with another "Dr. Love" inspired rocker, complete with that simple drum line, throbbing bass, and tandem buzz-saw guitars.  Same thing for "We're Here To Save Rock And Roll", and, while I won't go so far as to say the song achieves what it's title claims, it is again a surprisingly effective, full throttle rocker that I would imagine is a crowd favorite at whatever dive bar I LOVE RICH happens to be frequenting on any particular weekend!  "Fight The Fire" has more of an AC/DC feel to it, especially in the way the guitars lead into the song, reminding me a lot of "For Those About To Rock".  The KISS influence kicks back in once the singing starts on this mid-tempo rocker that is my favorite track on this disc.  "If You Don't Take Your Clothes Off..." is the last original song on this effort, and it wraps things up in fine fashion musically, although once again the lyrics are so ridiculous that they are only a rung or two up the ladder from the childish potty-mouthed humor spewed by the likes of Steel Panther.

The final two tracks here are simply alternate versions of "(You're So Hot)", one in Spanish of all things, and the other being a "clean" version that replaces the F*bomb with the word "love".  Classy!  Total skippers to be sure, if for no other reason than I have already heard this song once, I don't need to hear it twice more in alternate fashion.

The packaging is about as simple as it gets, with no band photos, no lyrics (honestly, you don't need them), and, well, pretty much nothing inside the digi-pack's front cover.  The cover artwork is actually a pretty accurate portrayal of what I imagine the band looks like in concert, so I guess there isn't much need for expensive photography on a purely independent effort such as this.

Look, I'm not going to say this is for everyone, because it's not.  Heck, I'm not even sure it's for ME, to be honest, but I can't say that I hate it, because I don't. In fact, I can go so far as to say I would love to hear more from this band, especially if they ever decided to write a couple of at least semi-serious songs while still maintaining this 70's-classic rock approach.  I don't want to admit I like this CD, but I would be lying if I said I didn't, yet I also don't play it with any kind of regularity.  So, where does that leave me?

Rating:  Rock this to a surprising 6.  I'm not gonna give it that CRANK IT spin of the dial, but I'm definitely not going to turn it down...or off...  Kudos to I LOVE RICH for playing things their own...and KISS's...way, even if it isn't overly original or especially intelligent.

Posted by arttieTHE1manparty at 11:26 PM