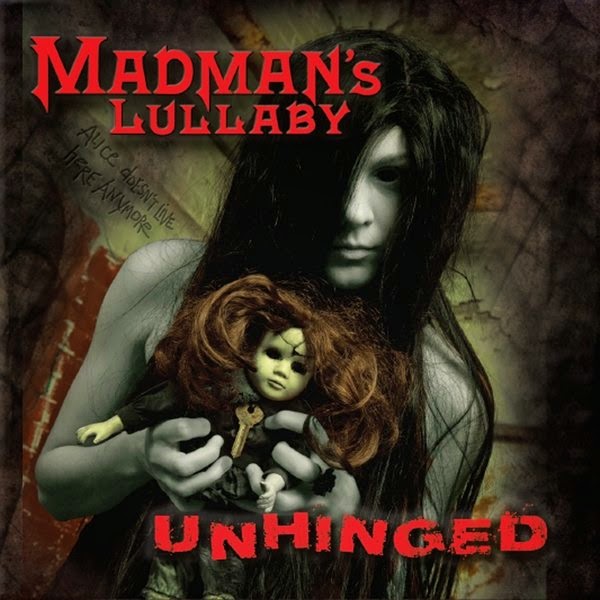 While certainly not a new band (they have been around since 2007), Madman's Lullaby has released the best album of their career thus far with the solid melodic rocker, Unhinged.  While no one comparison will pin the band down, think of the bluesy approach utilized to such great effect by Badlands, then mix in the melodic sensibilities of a Lynch Mob, the bottom-ended riffing of Black Label Society, and a vocal approach that reminds me so much of what Robin Kyle Basauri did with Red Sea and Die Happy that I actually did a quick double-take when I first popped this record in to make sure I hadn't missed something somewhere.  Top it off with top-notch production and mixing that brings alive each of the instruments in a band and you have an album that would have fit in well in the late 80's....and should be getting more airplay and respect in the 2000-teens!

The album kicks off with a dirty guitar intro from Mr. Brett, slinking into Friday's bluesy yowl, then settling into an uptempo groove that drives the song, and the rest of the album home.  More of the same follows, with a couple of the standout cuts being "Everything's Wasted" and "Gasoline", although nothing here is weak or throw away material.  "Gimme Shelter" is another powerful rocker, with some crushing guitars and drums, a bass line that drops right into the pocket, and the most powerful, emotive vocals on the record.  Do not mistake this for a cover of the Rolling Stones classic, as there is NOTHING in common between this song and the Stones except the title of the song.  "How Can I" shows that the band can handle a soulful ballad, before "You Never Mattered" steers the band back into aggressive, angry rocking territory that will leave your neck snapping and you hands pounding!

The last two tracks on this album somewhat set themselves apart from the rest of the album, as both take on a darker musical tone than the rest of the disc.  "Alice Doesn't Live Here Anymore" is very reminiscent of what Tesla has been doing on their past couple of studio releases: mid-tempo and rocking, slightly down-tuned, with thunderous drums and a soulful solo.  But for me, the last track is where the gem of the album lies.  Album closer, "That One Thing" has a definite Tesla-meets-Alice In Chains vibe to the music (tell me you can't hear AIC's "Rooster" in this track...I dare you!), and, for my money, really showcases the best this band has to offer.  While the entire album is very good, this song, to me, is borderline perfection, as the band seems to hold nothing back.  Bottom heavy, sludgy guitars feed the bluesy mood of the song that contains one of the coolest lines I have heard from a song in a LONG time:  "Well I got a cemetery of years of broken love haunting my past...".  Talk about painting a picture and setting a tone!  A killer guitar solo from Mr. Brett just scorches its way through the middle of the song before the heavy, dare I say grungy riffage kicks back in and Friday unleashes his powerful, emotion soaked vocals to carry things through to the haunting, echoing fade away at the end.  Truly powerful stuff from a band who plays their music their way without compromise.

The packaging is top-notch, as tends to be the case with Kivel releases.  A 12 page booklet includes all lyrics, thank you's, credits, band pictures, and additional album artwork.  The production is smooth and flawless, but not so polished that all the feeling is lost in the slickness.  The mix is solid with every member of the band given the chance to contribute in their respective manner (kudos to Jerry Osokie who recorded and mixed the project).

Rating:  An excellent introduction to the band for those who may be experiencing them for the first time, and a must-have release from 2014.  Crank this to 8!

Back To Reviews Index
Posted by arttieTHE1manparty at 1:01 PM