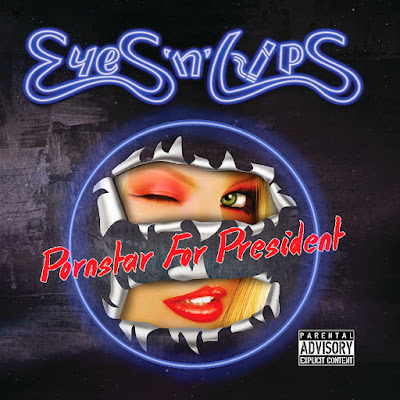 Eyes N Lips are the latest European sleaze band to come across my desk, with this particular band hailing from Milan, Italy.  From what I can gather, the band has been together in one fashion or another since 2011, with Vik and Gypsy being the only original members (they have also added a second guitar player, Chris, since the recording of this album).  Listing bands such as Guns N Roses, Faster Pussycat, and Airbourne as influences, then titling your album Pornstar For President, it is pretty obvious what these guys are going for as far as a sound and style goes.  But do they pull it off?

This is something of a yes and no answer, to be honest.  They are pure sleaze, to be sure.  There is no doubt of that fact.  They also have some definite musical ability, especially Gypsy, who rips out some really nice guitar solos.  Vik is more than competent as a drummer, and Swiff stays nice and tight with the drums, falling into the pocket on each of these tracks and never really straying from there; there are no huge bass intros or solos anywhere on this record, but he is solid enough for this style of music.

And then there's Mr. Skorpion...

To say that his vocals are going to be an acquired taste is kind of like saying, "Well, at least the poison tasted good before it nearly killed me!"  Mr. Skorpion squawks and squeals all over the place, sounding rather nasal in places, and using a falsetto approach about 70% of the time.  Think of the lead singer of The Darkness...but worse (and for me, The Darkness is ruined by their singer).  In all honesty, Mr. Skorpion's vocals just about make this unlistenable for me, which is too bad because a few of these songs have some pretty decent potential.  "Soldier Of Love" is an okay song with a nice guitar solo, a crunchy little breakdown in the middle, and very basic, shouted backing vocals that are pretty catchy, but MAN...those lead vocals KILL ME!    "Rock Your Love" has a heavy, dirty groove to it that I really liked when it kicked the song off, but then those squeals and falsetto vocals just start trying to claw at my brain...through my ears!...and the song is nearly destroyed.

On those occasions when Mr. Skorpion brings his vocals back into a normal range that won't drive dogs insane, he actually isn't a horrible singer and the songs are pretty good, if relatively simple.  Yes, his Italian accent is pretty thick, but I can deal with that without trying to find a set of earplugs!  A prime example of this is "With You", which I think is actually a pretty solid ballad with a nice bass line and good guitar work (I could do without the whistling at the outset of the song, but it isn't a song-killer for me).  "Bring Me To Your Paradise" has a Poison-esqe guitar tone and a Faster Pussycat-styled hook that makes for a really catchy song, and Mr. Skorpion manages to keep his vocals under control on what I think is the best song here.  "Desire And Curiosity" has a GnR kind of rhythm guitar line, and Mr. Skorpion only loses control of his vocals a couple of times, spending most of his time in a lower range than anywhere else on the album.  Album closer "Day After Day" sounds like the band may have found some sheet music Poison lost during the recording of Look What The Cat Dragged In, as it has that same kind of catchy guitar solo approach that C.C. DeVille used so frequently back in the day, and a pop-punk pace that I'm sure is a crowd favorite that will have people bouncing all over the place in a live setting.  Mr. Skorpion once again stays in vocal control here, so this song makes the cut as far as stand outs here.

I get it, this is sleazy, punky, glammy rock n roll, and it isn't supposed to be perfect or necessarily beautiful all the time.  Trust me...I get it.  But when one part of a band can almost single-handedly dismantle an album, it may be time to look for a solution for the next record.  Whether that solution is a new singer or some vocal lessons for the current yowler, that is for the band to decide.  As it stands, Eyes N Lips is definitely not the worst band I have heard even this month, and I think they have a lot of potential as they mature in their songwriting.  But damn...something has to be done vocally or I can't even guarantee I will survive reviewing the follow-up record.

Rating:  Rock this at a 5, but don't sit in a room full of windows or mirrors, as the glass is bound to shatter...just like your eardrums may do!