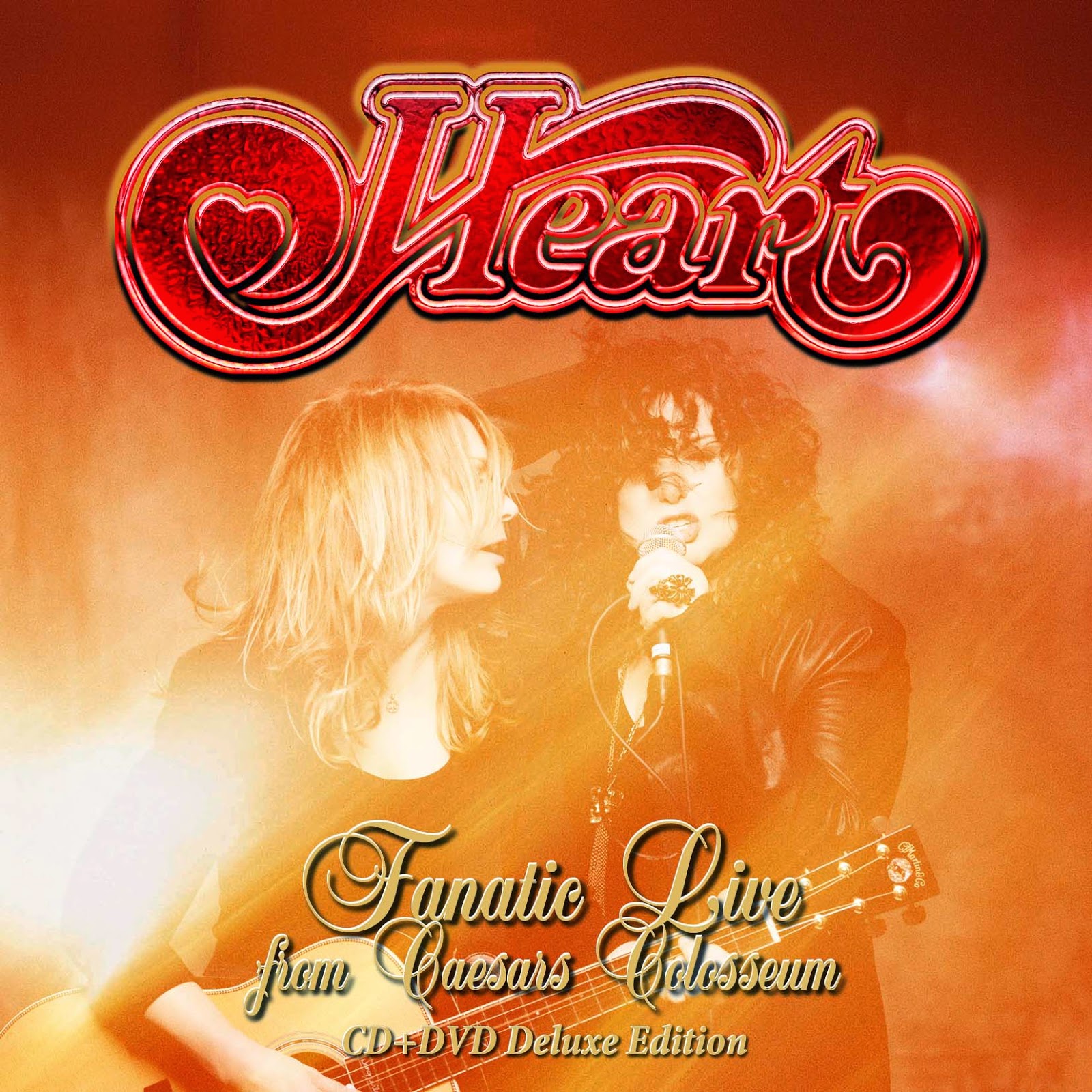 Ann and Nancy Wilson have been pursuing their musical dreams as Heart for more than three decades now, having released their debut album, Dreamboat Annie,over 37 years ago!  During that time, the sisters have amassed a more-than-respectable catalog of albums, a good-sized handful of recognizable classic rock hits, reinvented themselves into a quasi-hair band in the 80's, and continued on through the 90's and 2000's, even releasing a Top 20 rock record just four years ago with Red Velvet Car.  Refusing to go quietly and gracefully into the rock n roll night, the band still straps on their guitars and rock out when the mood strikes.  The band took the opportunity to record just such a show for this CD/DVD release from Frontiers Records, Fanatic Live from Caesar's Colosseum.

After a somewhat drawn out keyboard intro, the album starts off with the "Fanatic", the title track to both this and their latest studio album.  Despite the fact that this is a newer song, the band shows they can still bring it, especially with the huge riffs provided by Nancy and the always powerful vocals of Ann.  Maybe a little bit more crunchy and heavy than most casual fans will associate with the band, the song is a clear indicator of the attitude the sisters still bring when making music, and it is a good opener for this live package.  "Heartless" follows up nicely and shows the band is not going to shy away from their past in this performance, as this track goes clear back the 1978 record, Magazine.  Executed nearly perfectly, this is the Heart that I was hoping to hear more of on this record, but I will get to more of that in a bit.

Things get really comfortable for a good portion of the crowd with the massive 80's hit, "What About Love", which features a tastefully done string section and Ann's spot-on vocal performance.  The band then channels their inner-Led Zeppelin on "Mashallah!", which again allows Nancy to flex her guitar prowess in a way that I don't think was ever fully appreciated, even in the band's heyday.  "Even It Up" is a sassy number that is likely the only tune from the Bebe Is Strange album that most people even remember, but it still rocks 34 years after it's 1980 release.  "59 Crunch" is another great hard rocker, but not a song a lot of people will be familiar with outside of the Heart fanbase, as it also came from Fanatic.  "Straight On" takes the band back into familiar, classic territory.  The album closes with "Crazy On You" and "Barracuda" both of which never fail to disappoint as the sisters rip through these songs like they haven't been performing them for 30 plus years and are still out to prove the worthiness of these major hits.

Not everything is clicking on all levels here, at least for me.  I don't understand why they felt the need to include a song with a FLUTE for crying out loud!  While I understand want to let Nancy get  a chance to showcase her under-appreciated vocals, "Walking Good", was not a good song in studio fashion (check it out if you dare, but be warned...Sarah McLachlan AND a banjo show up on the studio version!!!), and its just as bad here with a flute.  "Dear Old America" is just not a great song, in my opinion, and could have easily been left off in favor of something else.  I also cringe at the inclusion of "Dog And Butterfly", which is a song that has ALWAYS annoyed me and I loathe that it is included here!  Seriously, I could go forever without hearing that song again and I skip it no matter where I come to it.  Heck, it barely even cracked the Top 40 back in the day, so I really don't get the attraction to this song, especially at the cost of so many other songs the band regularly skips over in concert.   Speaking of which, several of the band's more prominent hits are missing, such as "Nothing At All", "All I Wanna Do Is Make Love To You", "Who Will You Run To", and most surprisingly the top five hit, "Never" and the classic "Magic Man", most of which the band ALWAYS seems to ignore live.  I guess I just had hopes that they would finally get around to including a couple of these songs rather than some of the lesser-known material.  "These Dreams" and "Alone" are performed well, but they sound a bit tired, as if the band is just going through the motions.
The packaging is what you can generally expect from a Frontiers release: a quality booklet with a nice selection of photos, thank you's, credits, etc., although there are no lyrics, which is to be expected on a "best of...live" collection.  This is also a DVD release, so we have a tri-fold digipack here, but at least it is the type that has the solid plastic trays to help hold the discs in place.  The mix is pretty good throughout, although there are times when I wish the guitar was a bit more out front, and the bottom end is a bit muddy in spots, but not distractingly so.  It actually sounds like a live show and not a studio-retouched record, so kudos for the authenticity.

All in all, a solid live performance, but one that doesn't do a lot to distinguish itself from previous live efforts except to include a couple of new songs.  Too many classics are still skipped, especially from the late 80's/early 90's, and I think one or two of the songs here could have been dropped to include those missing tunes.  For this reason, I think Alive In Seattle, the band's 2005 live effort, is a superior, 2-disc package as it includes a couple of covers, a new song, and "Magic Man".

Rating:  Not bad, but not amazing, either, mostly because of the song choice and the fact that its hard for a live record to do much for me.  Rock this to a 5.5, although I suspect only hard-core fans are going to spend much time with this record.