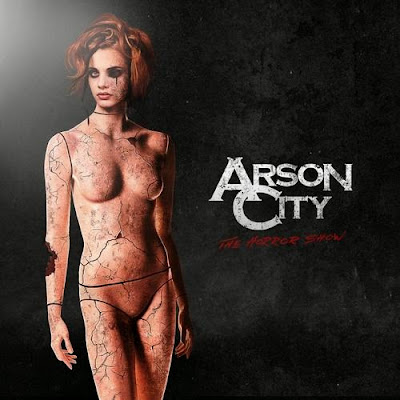 Finally!  Nebraska modern rockers, Arson City, have finally released their first full-length record with The Horror Show.  Now, it is true that a handful of these songs can be found on the band's previous EP's, including tracks 4, 6, 8, and 10 which came from the excellent Not Coming Home EP, as well as track 5, which comes from their debut, self-titled EP.  That being said, we are still treated to six new tracks on this album, which also features a line-up change, with Matt #3 joining the band, as Matt DiBaise takes over lead guitar duties from previous axe-slinger, Eric Whitney.

The album kicks off with the title track and first single, "The Horror Show".  This song is exactly what Arson City is all about...crushing percussion, buzzsaw rhythm guitars, and "Mayor" Wilson's snarled vocal delivery.  Insanely catchy from the get-go, this rocker bounces along in typical Arson City fashion until, seemingly out of nowhere, a guitar solo cuts into the mayhem!  New Matt, (the band has three of them), Matt DiBaise rips off a tasty, if relatively short solo that nicely accentuates this smoldering intro to the new album, adding yet another dimension to the already multi-faceted band.

Electronic elements kick off "My Perfect Drug", another new track here, as Wilson takes the listener on a musical journey through a less-than-ideal relationship based around two people who are essentially addicted to each other despite the fact that they are not good for each other.  DiBaise adds in another very short, yet effective, solo here, making the album two-for-two as far as new songs go.

Things quickly become three-for-three as "Dance With The Devil" drops in with a Rob Zombie-esque intro before heading off in an Alice Cooper-styled direction, especially in the way Wilson phrases the chorus and a bridge section.  Solo number three from Matt #3 is a bit longer than the others, again blending in nicely with the rest of the track and keeping the focus on the song as a whole rather than on one short segment.

The next three songs all come from previous releases, although "I'm Awake" was completely re-recorded, so it definitely sounds cleaner and more properly produced than it did on the self-titled EP.  "Frankenstein", the killer ballad "Not Coming Home", the remade "Too Close", and "City Of Fire" are included here in the same recordings that they appeared on the Not Coming Home EP, however they have been remastered and the volume is equalized so that they flow seamlessly with the rest of the new tracks here.

"New Disease" is another new rocker that showcases Bechenhauer incorporating synthesized strings to near perfection, giving a band like Skillet a run for their money in proper use of this musical element.  More of a mid-tempo rocker than the majority of the neck-snappers here, "New Disease" also includes gang-shouted backing vocals, and some razor sharp rhythm guitar work supported by the ever-present powerhouse rhythm section of Oliver and Denker.  Once again, DiBaise blows through a nice solo, leading into an acoustic guitar interlude, before blasting back into the scream-along chorus.

"Lets Get This Fire Started" charges out of the cover of Alex Clare's "Too Close", guitars ablaze and rhythm section chug-chug-chugging so that Wilson can spit out his vocals across the surface of this modern metal anthem.

"Lies" closes things out in spectacularly moody and eerie fashion with the horror show themed intro, more synthesized strings, and Wilson once again in pseudo-Alice Cooper mode as he sneers his way through the verses of this fist-pounding track of angst and betrayal.  One of my three favorite new tracks here, this is a song that comes across even better in the live setting.

Speaking of the live setting, I have said it before, but it deserves repeating:  I have yet to encounter a band that puts on a better live club show than Arson City...and I have seen hundreds of different bands in various clubs over the past 25 years.  These guys put absolutely everything they have into not only the musical, but also the theatrical, parts of their performances.  Mix in their Horror Squad drum corps, and you have one incredibly powerful live show.  The band will be featured on several festivals this year, including Rocklahoma and RockFest, so make no excuses and get out and see these guys live, buy their merch, snag this disc, and have them scribble their name on it as you are sworn into Citizenship as a resident of Arson City!

The packaging is relatively simple, as this was a fan-funded effort, with the vast majority of the money generated used in the recording process.  There is a single band photo on the inside, personnel listing, and a list of thank-yous.  (Again, in the interest of honesty and full-disclosure, my name is in the thank-you list, as I contributed to the funding of the record....)  The production is excellent, with Beckenhauer and Wilson working to co-produce the record, and the mix is solid and tight throughout.

Rating:  Definitely crankable, this album is an early contender for indy release of the year, and definitely a Top 20 album overall.  Crank this to 9!

Back To Reviews Index
Posted by arttieTHE1manparty at 3:45 PM