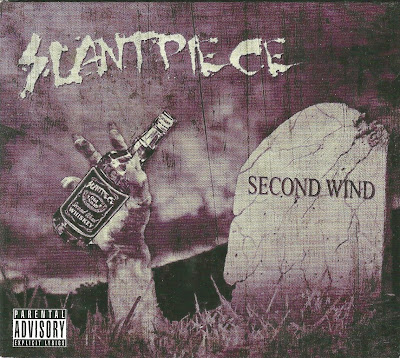 It should be obvious to readers of this site that I love to review music.  It's always such a thrill for me to come across something new, a band not everyone has heard of.  Even more exciting for me is when I get the chance to review local music that is of top-notch quality because, let's face it, a LOT of bands think they have what it takes, and even more think they sound "killer".  Not trying to crush anyone's hopes or dreams, but in all honesty, rarely do these smaller, independent bands have the skill, let alone the songs, to put together a solid enough release for more than die-hard fans to take notice.

Slantpiece is one of those bands that should get people's attention!

Hailing from Kearney, NE, Slantpiece is a four-piece metal band that combines elements of classic metal, doom/stoner metal, metalcore, and what I like to refer to as "Bar Metal", into their sound.  ("Bar Metal", for the uninitiated, is the kind of metal that makes you want to go to a local watering hole, grab some guy by the throat, and throw them around for a bit in the mosh pit that forms in front of the stage.  If you've been in a truly good local live music club, you likely know what I mean...)  Twin guitars, pounding bass, and pummeling drums are the key elements here, along with Johnson's bottom-end yowl, and some excellent production work from none other than Michael Beck, who really pulled the best performances out of these four guys on this, their second record.

Things kick off in violent fashion with "Ghosts Of Yesterday", a chugga-chugga assault right from the get-go.  Johnson's bottom-end vocals are layered in spots by a blackish-sounding backing vocal that provides a unique dynamic that sets the band's sound off from your traditional metalcore approach.  Additionally, the inclusion of a really nice guitar solo

"Baptized In Whiskey" is the first single off this record and it has been getting some regional airplay, which is nice to hear.  Taking more of a doomy, sludgy approach than "Ghosts...", "Baptized In Whiskey" gives the listener a better idea of the talent involved here, as the bluesy guitar riffs really drive the track, with an excellent twin-guitar riff working just over some of the best rhythm section on this mini-album.

"Shallow Grave" hearkens back to the 80's mid-tempo thrash approach as far as the guitars, never really reaching breakneck speed, but also never dropping down into the slower, sludgier territory of "Baptized...".  Johnson's vocals approach death territory in spots here, again accompanied by some blackened screaming in the background, but he manages to keep the lyrics decipherable throughout the track.  Tavis rips into a blazing solo at about the 2:45 mark here and just GOES OFF for the better part of 45 seconds here, while Sabah throws in some nice double kick work and Carpenter's bass pulses the track ever forward.  While I like everything here, this track is hands-down my favorite.

"Stuck In A Rut" starts off with a cool clean guitar atop a march cadence laid down by Sabah before slinkiing into an angry, Sabbath-styled track, with Johnson using more of a gritty, bluesy vocal approach for most of the vocals here (although his trademark yowls are still present throughout the track).  Once again, Tavis really smokes the solo here, showcasing the fact that it doesn't really matter what style of song Slantpiece is busting out, he is more than capable of coming up with a solo to not only match the style but also blister the speakers it is projecting from.

"Scars" speeds things back up once again, feeling a bit like a Pantera track, but a bit thicker/sludgier in the production department.  The only track that features what I would call a true break-down section on the track, this is one that really bridges the gap between the band's first album and Second Wind.

Speaking of Second Wind, the title track closes things out here, cranking the speed up again on the intro, only to pour a bunch of sludge and grit into the machine, bogging it back down into another Pantera-inspired groove for the verses, then ratcheting the speed back up during the chorus.  Shouted backing vocals, chugga-chugga riffing, some jack-hammer styled vocal spitting from Johnson, KILLER tempo changing work from Carpenter and Sabah, and yet another scorching (if too short) guitar solo from Tavis really leave the listener wishing that this WAS just the second wind for the band on this disc, rather than an album closer.

The length of the record is the one real gripe here, as at only 6 songs and 23 minutes in length, it really feels like the record is just heating up and it is already done.  I would love to have had the guys include a couple of tracks from the first record..."Back Against The Wall" and "War Cry" would've been killer...in re-recorded fashion, but I am sure budget restrictions played a big role in what was included here.  Likewise, the packaging is about as simple as it gets, with only one band photo, line-up info, and a thank-you section in this single-fold slipcase.  Lyrics are not included.  (In the interest of full disclosure, yes, I am thanked in the liner notes, but make no mistake, I pull no punches here, and if this album sucked. well, I guess my name would be included on a sucky album's liner notes and I'd let you know about it.  I do NOT let a little "liner note love" change my honesty in reviews...)

The production is top-notch, if not big label, in quality.  What I mean is that while exceptionally solid for an independent project, there is not going to be any mistaking this for a major label release, as there is a rawness here that is not found on big budget albums...but there is a charm to that rawness that makes the album feel organic and not forced.  As I said before, Michael Thomas Beck (previously the singer for Red Dragon Cartel and Kings Of Dust) really pulls the best out of each of these guys on this record, and the difference between Second Wind and the band's first record, Get You Some, is notable.  How these guys managed to get hooked up with Beck, I'm not sure, but the results are excellent.

There are a lot of good bands on the local scene all over the country, but few that have sent me material stand on the cusp of greatness.  Slantpiece is a different story, in my estimation.  These guys not only make great music and write great songs, if you ever get the chance to see them perform, you will understand that they live, breathe,,,heck, they REEK...of the music they perform.   Trends be damned, this little band from the middle of America still plays metal for metal's sake and they believe in what they are doing.

Looking like central Nebraska's version of Duck Dynasty, these are four of the nicest, most genuine guys I have met in the hard music scene, and they bust it live every single time I have had the chance to see them perform.  Do yourself a favor, track them down, buy their merch, and snag a copy of Second Wind (and Get You Some, if you're so inclined).  Metalheads will not be disappointed.

Rating:  Crank this up to 8 and do what you can to keep local music alive, not only in Nebraska, but wherever you call home!