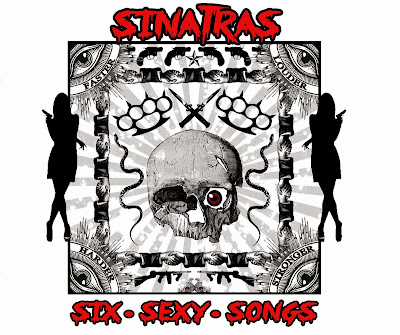 Death 'N Roll.  That's how the Sinatras label their music, and its a fairly apt description.  Mixing elements of thrash metal, classic metal, punk, modern production styles and deathy vocals, its obvious that Sinatras draws from multiple influences in their performance style.  I've heard bands such as Carcass and Hatebreed mentioned when attempting to describe this band's sound, but I feel it is remiss to leave out older bands, such as Motorhead, as well as more modern bands such as Demon Hunter and Five Finger Death Punch as well, as this is not pure 80's/90's thrash or thrashcore worship here, but a combination of metal styles from the past three decades.

The songs are all extremely tight and well performed, with a surprisingly good sound for a band on their debut release, especially on an independent record such as Six Sexy Songs.  Each of these tracks clocks in between 4 and 5 minutes long, with no ballads...heck, no mid-tempo songs...included in the six track lot.

Musically, the rhythm guitars, drums, and bass work stand out here, as all are tight and crisp, giving the music a punchy sense of urgency to them.  The lead guitar solos are generally pretty short (15-20 seconds), again more of a modern approach than the style used by thrashers of the 80's, although there is obvious talent incorporated here.  Despite the fact that the band throws the "death" label into their own sound, the vocals are certainly not bottom-of-the-grave scrapers that make the lyrics completely indecipherable, as many death metal vocalists do.  This is where I think the Demon Hunter references can be mixed in, as nothing on Six Sexy Songs is any more brutal than the first couple of Demon Hunter albums.

Lyrically, the band is rather silly, although I don't necessarily know that that is the intent.  As is often the case with foreign bands performing in English, I'm not always certain the band knows 100% what they are singing (meaning things are lost in translation), and a lot of cliches tend to get mixed in.  That being said, I don't think the lyrics are the main focus of this band.  If profanity offends you, skip this, as, once again, the cliched use of vulgarity is prevalent here.

Really, only two complaints come to mind with this album.  The first, which is relatively minor, is the fact that there are only 6 songs on this release.  Second, and more of an issue for me, is the fact that there is basically zero change in tempo, style, or approach, so all the songs start to sound the same and run into each other with the exception of "W.A.F.S.", which reminds me a lot of Five Finger Death Punch in its tempo and musical approach at the beginning of the song.

Never venturing fully into death metal territory, but always playing fast and furious while still retaining a sense of melody, the Sinatras have begun the process of carving out a small musical niche for themselves.  I highly doubt these Italians ever become household names, and I don't envision them ever being anything more than an opening tour act or lower-mid-card festival band, but that's okay.  The band plays what they play, not compromising their truly metal sound to fit modern radio rock trends.

If you enjoy your metal straight forward, fast, loud, and thrashy, Sinatras Six Sexy Songs is a good mini-album to check out.  Again, don't expect pure death metal here, but do expect to be entertained for about half an hour, as these guys definitely bring their "A" game to this effort.  It will be interesting to see where the band goes from here...if they go anywhere at all.  Bands such as this, despite their obvious talent, often wash out after a single release, so their future is likely very much up in the air.

Back To Reviews Index
Posted by arttieTHE1manparty at 9:27 AM