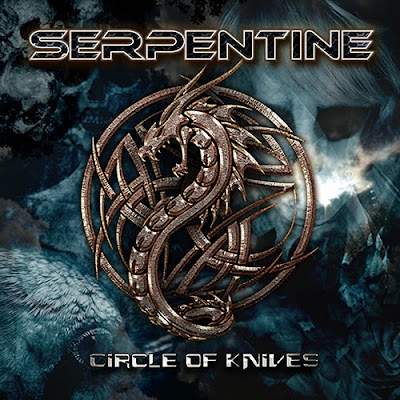 Four years have passed since I last heard new music from Serpentine, and apparently a good amount has happened with this British band since I reviewed Living And Dying In High Definition.  For starters, I missed an album somewhere, because it turns out this is actually the band's third release.  Secondly, and perhaps most importantly from a reviewer's standpoint, there have been some fairly significant band changes.  Specifically, Tony Mills (ex-Shy, ex-TNT, ex-Siam) is now ex-Serpentine as well, as he is no longer with the band, replaced by Adam Payne.  Also gone is previous bass player, Gareth Vanstone, replaced by Owen Crawford.  However, with 3/5 of the band intact, including the guitar/keyboard combination that makes up the core of the band's sound, I was hopeful that much of what I liked about Serpentine previously would still be found here on Circle Of Knives.

As it turns out, I didn't really need to be overly concerned, as Serpentine has returned with another excellent record of melodic hard rock, with elements of European AOR and even a hint of power metal thrown into the mix.  This is especially evident in the album's opening number, "Season Of The Witch".  Immediately we are treated to layered keyboards and some soaring guitar leads, accompanied by new singer, Adam Payne's deeper, richer, and dare I say more powerful, vocal approach, which steers the band away from the Shy-esque AOR of the first record and more into harder-edged melodic sound.  "Forever" is another similar track, with a hard-charging guitar sound dominating the track, moving the keys into more of a supporting role. The same can be said of "The Hardest Fall", which may be my favorite track here, competing with the fantastic title track, which unleashes some absolutely stellar guitar work throughout, with a searing solo really topping things off on this song which many people may find themselves labeling "progressive" in its style and approach.  How more people haven't heard of Chris Gould, I have no idea, as this guy is a guitar talent not commonly found in music today.  Just listen to the emotive intro to the ballad, "Bleed" and you will instantly realize what an underrated performer Gould truly is.

The AOR of the band is not 100% removed from the new sound and approach, as is evident in a song like "La Tragedienne", as the focus here is the massive chorus and the melodic keys that support the structure of the song, filling virtually every sonic nook and cranny.  Much the same can be said for "Where Does Your Heart Beat Now?", which sports a much more keyboard-centric sound than some of the other songs here, reminding me of the 80's AOR approach of bands like Giuffria or Shy, as examples.

"Bound By The Strings of Discord" is a hard-charging number with some solid drum work from Millward, and while it doesn't really fit the tempo and mood of much of the rest of the album, it is still a solid track that again finds Gould in top form.  Album closer, "Suicide Days" is another full-on rocker, showcasing Payne's ability to unleash a top-notch metal scream when needed, and wrapping up an exceptionally strong return from a band that I quite frankly had forgotten about due to the long lapse between albums I had heard  (Not sure how I missed the second album...).

Rocking harder than the debut, Circle Of Knives is every bit as strong as Living And Dying In High Definition, with the new additions to the band more than holding their own as they forge their own identity within the structure of the band.  Gould has grown in his sound and talent, as well, pushing himself toward the top of the heap as far as British rock guitar talents goes.

Checking in at nearly an hour in length, with no song running for less than 4:30, there is a lot of music here to digest and appreciate.  However, when all of the songs are this good, it's definitely not an act of labor to find something new to appreciate with consecutive spins.

Now I have to find that second album....

Rating:  Every bit as crankable as the debut.  Turn this one up to 8.5.