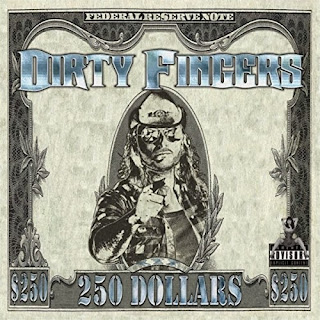 Europe continues to resurrect the heyday of the Hollywood Sunset Strip scene, constantly cranking out new bands with that big haired, sassy, sleazy sound that made the late 80's and early 90's so much fun for hard rock fans.  Unfortunately, what Europe is also doing, in my opinion, is slowly succumbing to the same problems that the hair metal scene of the 80's ultimately crumbled under:  too many sub-par bands, clone bands that all look and sound alike, and unoriginal music that leaves bands indistinguishable from one another.

Dirty Fingers falls into the first category, in my opinion.  Yes, they have some really good guitar players and an above average drummer, but they seriously struggle with a less-than-great vocalist, a weak mix that buries the bass on nearly all of the tracks, and average (at best) songwriting.  I mean, come on...it's one thing to have a title track, or to have a song named after the band...but to have BOTH on the same album???  To me that wreaks of desperation to come up with material.

There are positives here.  As I said, the guitar players have definite skill, especially Menini who rips through some absolutely stellar solos throughout the album.  The solo he peels off in "250 Dollars" is leaps and bounds ahead of the majority of the axe-work that passes for musical talent in so many of today's bands.  The same can be said of the emotion he pours into his passages in the decent ballad, "Black Magic Night".  There is some nice harmonica and slide guitar work, as well as the best rhythm guitar work on the album, on "Whisky" to help make it an interesting listen, and "I Am" (where we can actually hear the bass), has some really nice changes in rhythm and tempo throughout the song, again keeping the listener's attention and setting their head to nodding along.  In fact, I would say that overall, musicality is NOT the problem here, as all of the guys seem to be pretty good at what they do.

The problem with the songs is that no matter how good the guys play, the songs they are playing aren't that good.  You've heard the saying "you can polish a turd but it's still just a turd"?  Same thing applies here.  No matter how skilled Menini is on the axe, or how competent Nuzzo is with his drumming, you can't save sub-songs that are rarely interesting.  Out of the nine tracks on this album, only 5 do anything for me musically:  the previously mentioned songs "Black Magic Night", "I Am", and "Whisky", as well as the southern-tinged stomper "Heroes' Days", and album opener "Back To The Move".  The rest range from uninteresting to boring to...to crap, really.  As an example, "Nothingness Dance" sounds like an 80's metal horror movie theme, coming across as dated and tired and just way too long, even though it's only 4:55 in running time.

Okay, so that means 4 out of  9 songs can just be thrown out because they really aren't good.  So that's still better than a 50% album, right?  Wrong.  I haven't tossed out songs because of the vocals yet.  Grisanti tries...he really, really tries.  And it's not that he's out of key or anything that kills some of these songs.  Part of it is that he sings in a low register that lacks emotion and comes across as half-shouted or barked most of the time.  The other problem is his accent is so thick it just ruins a lot of the vocals here.  I would honestly rather NOT understand what he is saying and listen to him singing in Italian than to know what he is trying to say and then forcing my brain to correct his mispronunciation and misplaced accentuation.  So, because of the vocal issues, "Back To The Move" is cast off my decent-to-good-song list, as is "Whisky" (which has really stupid lyrics anyway), and "I Am" (which I can't understand half the time).

That essentially leaves "Black Magic Night" and "Heroes' Days" as the only songs that really survive the album for me, and if I'm being 100% honest, neither is that spectacular and would not have been given 15 minutes of MTV's time or a record executive's attention.  Not that either one of those had any real idea as to what good music is/was, but both knew something about making a band successful, and Dirty Fingers wouldn't give MTV or a record company anything substantial to work with.

Perhaps with another year or two of songwriting, a new vocalist, and better album production, Dirty Fingers could pull together a decent album.  What they have here is a sad introduction to a band that unfortunately may turn potential fans off from even considering a second album, should one ever be released.

Back To Reviews Index
Posted by arttieTHE1manparty at 2:40 PM