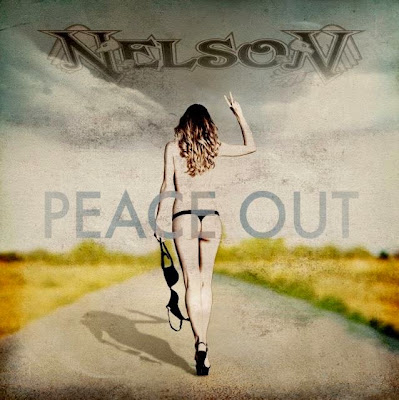 So this is it...the swan song for Nelson.  Reportedly, this is the last time Matthew and Gunnar will record an album under the Nelson moniker, although they have assured fans that they will continue to perform musically with a new project, Matthew & Gunnar, heading in a more "Everly Brothers meets the Eagles" direction.  As a parting gift of sorts to their longtime fans, the Nelson Twins go out with an absolute bang, treating listeners to one more heaping helping of polished, melodic hard rock that sounds like it could have been the follow-up to their classic debut, but mixing in a few surprises as well!  Soaring harmonies, tight vocals, excellent musicianship, and top-notch songwriting prove that Nelson is hanging things up by choice, not due to an empty tank, as this album is absolutely stellar and proof that very few bands of this style could actually hang with the brothers when they were at the top of their game.

The album kicks off with the sound of an old dial-styled radio being tuned in before the polished classic Nelson sound kicks in on this opening rocker, instantly plastering a goofy grin of recognition onto the faces of fans of this lost type of happy-sounding, poppy hard rock that has long since disappeared from the radio that intros the track.  Everything Nelson made popular on their debut record is here, from the tight vocal harmonies, and polished musicianship to the sing-along chorus and toe-tapping rhythms.  "Back In The Day" follows things up perfectly with an insanely catchy rocker all about the nostalgia of youth and the songs that recall those feelings for us.  There is a really nice guitar solo thrown into the mix as well, and the band is obviously having a great time as they click on all cylinders here.  Great, great stuff here that shows off the brothers' songwriting skills.

"Invincible" starts off with a darker sounding musical intro, but it drifts into the same musical territory before long, as does "Let It Ride".  Both of these tracks keep the uptempo rock churning, even if these two tracks aren't quite as shiny and happy as the opening duo of songs.

"I Wanna Stay Home" makes me chuckle a bit because lyrically its almost a non-hair metal song, an anti-party song about wanting to stay home with the one you are in love with.  Hooky, catchy, and so easy to sing along to, this track does nothing to slow the happy momentum the record carries through the first five tracks.

The first ballad to show up is "On The Bright Side", and it was well worth the wait to get here.  Starting off with a bluesy wail, this song mixes in enough backing "oohs" and "aahs" to transform the somewhat jangly tune into a Beatles-meets-"Never Say Goodbye" Bon Jovi slow dance number that, had this song come out in 1990 instead of 2015, I could hear being played at your senior prom as you tried to convince yourself and your date that you'd love them forever even if high school was ending.  Nostalgia, heartache, soul-searching....  *sniff*  Excuse me while I make a phone call to my high school sweetheart....

We crank the rocking right back up with back-to-back tracks that are among the best of the album.  "Rockstar" has a bit of an edge to the music to counter the whispered "rockstar" backing vocals scattered throughout the verses.  Thick power chords drive this track more than what you is typically expected from Nelson, which makes the song all the more interesting for me.  "Autograph" incorporates some keyboard sounds into a song that features a bit more aggressive guitar riffing and hair metal soloing than was present on the first half of the album, but the harmonies keep this song from slipping out of the wheelhouse of the likely listener here.  Two really good tracks back-to-back here, but two that are also the least like anything that was found on the band's debut.

"What's Not To Love" drifts back to the poppy-AOR rock that started the album out, but things stay there for exactly one song, as the next track, "You And Me" is less about Nelson and more about Zeppelin than anything else.  Easily one of my favorite tracks here, this is Nelson on steroids driven by attitude, and cranked up on energy drinks!  I've heard pretty much everything the band has released, and never have I heard them flex their musical muscle to this level.  Honestly, I would LOVE to hear an entire album of this type of music from Nelson, as they flat out smoke this track and pull it off with seemingly no effort at all.

"Bad For You" starts off with an intro that reminds me of Metallica's Black album, combined with Vandenberg's "Burning Heart", before riffing into another solidly rocking number, finding the lead vocals hanging out in a slightly lower register for the first parts of the verses before extending themselves back into their typically higher range.  (Be sure to be listening for the Tommy Tutone reference dropped into the lyrics here...good stuff!)

Album closer, "Leave The Light On For Me" has a very gospel feel to the songwriting.  I feel like I have heard this before in some ways, but I can't quite figure out why.  It kind of reminds me of what Bon Jovi did on Keep The Faith and Poison attempted on Native Tongue, though neither is a perfect comparison.  It's a decent song, and a good one to close on, but far from my favorite song on this record.

Is this new record as good as Lightning Strikes Twice from a couple of years ago?  Nope....it's better.   Rather than try to completely duplicate the things that worked so well on After The Rain (which I felt Lightning... tried to do), Nelson stretches themselves a bit musically, especially on the second half of the album.  No, there is nothing here that fans of that debut classic won't also really enjoy, but there are enough eye-opening moments to keep people from feeling like they've already heard this album.

If fans want to just toss out everything following After The Rain and skip forward to Lightning... and Peace Out, they will have a nearly perfect trilogy from these immensely talented brothers.  Not to say their independent material from the 90's and 2000's isn't worth checking out, because some of it is very good, but its the trilogy of albums mentioned here that will represent what most people associate with Nelson, and will be the legacy the brothers...and their band...are likely remembered for.

Rating:  Crank this band one final time!  A solid 8.5 is in order for Peace Out!