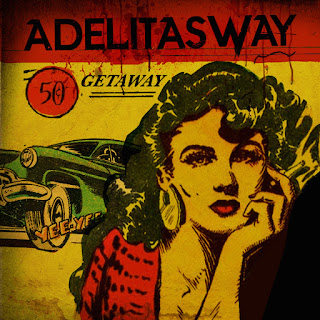 Adelitas Way finally returns with a new album...sort of...after a long-delayed, fan-funded project.  No, there's nothing shady going on here...life just got in the way.  And, as to the "sort of" comment in the opening of this review, well, five of these songs were previously available on their Deserve This EP that came out almost exactly a year ago, and which we reviewed here in March of 2015.  Those five songs are tracks 6, 7, 8, 9, and 11 on Getaway, so I won't retread much of the review with those songs, although I still believe that "I Get Around", "Filthy Heart", and especially the wickedly melodic and somewhat funky "Harbor The Fugitive" are three of the best tracks on the full project, just as they were on the EP.

With the new material we find Adelitas Way returning to the modern hard radio rock approach that has worked so well for them over the past decade.  Rick DeJesus remains a strong songwriter with a soulful voice when he chooses to sing, and a powerful snarl when he decides to get a bit rough with a certain song.

The album kicks off with "Bad Reputation" which has a decidedly danceable, almost disco feel to the way the opening chords are structured, although the gritty guitars and DeJesus' attitude-infused vocals jump into the mix.  Catchy as anything, the track definitely gets the head nodding and the feet moving right from the start, setting the stage for what long-time fans hope have been clamoring for, which is a solid return effort from Adelitas Way.

With the title track, a nice hard radio thumper, "Getaway", finds the band doing what they do best, as  a ringing guitar intro and solid, driving rhythm section propel this track that I anticipate will end up all over rock radio this spring and summer.

"The Good Die Young", while a cliche as far as titles go, is a really nice, slower tempo rocker with a heavy blues vibe running throughout it.  "Low" picks the pace of the album back up with another catchy, hard rocking number that really gives Cushing a chance to stretch his strings, as the bass work is particularly strong here (and on "The Good Die Young" as well, for that matter).  Stafford does a great job emphasizing the tempo changes in this song as it goes into the pre-chorus...and the following shift once the chorus actually hits...giving "Low" a feel unlike anything else on the record and is yet another track that I would imagine will blow a speaker or two this summer.

"Put You In Your Place" starts off on a melancholy vibe before a Zeppelin-esque vibe comes thundering forward in the heaviest, angriest, darkest track on the album.  F*bombs abound, as DeJesus clearly has a bone to pick with someone and he spares no venom in his musical tirade that also showcases more typically strong skin work from Stafford and just a killer guitar tone from Zakaryan.

The last new track on the record is slipped in amongst the EP tracks, and it is a dang fine track and easily one of the best 3 or 4 in this collection.  Bluesier and dirtier than the rest of the material here, "Shame" just oozes sweat and smoke and cheap barroom bourbon, finding DeJesus really wringing the emotion out of his words here.  I dare say I think I would like to hear the band actually tackle a full blues-styled record full of tracks such as "Shame" because they nail this song in a BIG way, with big credit going to Zakaryan and his handling of the blues licks on this track!

It was a long wait, to be sure, so was it worth it?  I think so, as it really sounds like the band put a lot of thought and work into these new songs and they really work well with the material they had previously put out there for their fans on the EP.  This is an album that you can put on, kick back, and just let run from end to end, as there really isn't a weak song here, and no two songs have that heard-it-already feel to them that make so many albums feel like they are just one or two songs bleeding into each other on repeat.  Far more musically inventive and expressive than anything in the band's catalog, Getaway showcases Adelitas Way really expanding upon what they have already done very well and getting comfortable with themselves as musicians and songwriters.

My copy is a digital download as I was a Pledge Music sponsor of the album, so I cannot comment on packaging at this time.  The mix is solid an the production is top-notch, with the new material and the older material blending together flawlessly.

Rating:  A solid, solid return from a band that has truthfully been a bit hit-and-miss for me in the past.  Crank this to 8.5!