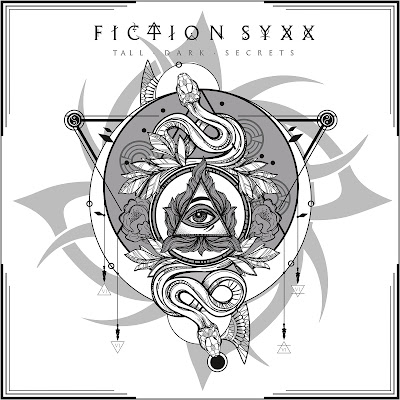 I'm gonna let all you bands in on a secret.  If you want to get me interested in your project, right quick and in a hurry, get JK Northrup involved.  Simple as that.  I am such a fan of his playing, his mixing, his producing...even if for some reason the album ended up being terrible (which I find highly unlikely), the simple fact that Northrup is involved has me interested from the get go.  So, that being said, when I first heard about Fiction Syxx, I knew I had to get my hands on it and give it a listen as soon as I could.

Fiction Syxx is a melodic metal project...some might even go so far as to say a progressive rock/metal project...featuring some fairly big names from the genre.  Not only is Northrup involved, but Tony Franklin (Blue Murder/Quiet Riot/The Firm), Eric Ragno (who has played seemingly with EVERYONE), and a whole slew of guest musicians join up-and-coming drummer, Rory Faciane, and the severely underrated vocalist/guitarist, Mark Allen Lanoue, who is the mastermind behind Fiction Syxx.  Combining an obvious love for the melodic style of the 80s with a somewhat progressive approach to several songs, Fiction Syxx sounds at times to be very familiar and very comfortable...in spite of the fact that nothing here come off as clones or copies of anyone else's music or style.

"Given Sight" starts things off in particularly strong fashion, with a brief intro leading the band into an uptempo, melodic rocker which features not only some excellent rhythm guitar work, but some really nice supporting keyboard work...and even a brief keyboard solo...from Ragno, before Jimi Bell of House Of Lords explodes into the first of several guest guitar solos throughout the record.  Franklin's bass is also a definite force on this track, but the big surprise to many will be the powerful, smooth vocals of Lanoue.  Confident and in control throughout the track (and the record, for that matter), Lanoue comes off like a seasoned pro, gliding smoothly across this track, easily lowering and elevating his register when necessary, and not falling into the over-singing trap that a lot of similar-styled vocalists seem to do these days.  A lot of good can be done with subtlety in situations where big, bombastic vocal acrobatics actually will do damage, and Lanoue expertly avoids the latter, staying squarely in his wheelhouse, knowing who he is as a singer.  Big time kudos on this from me, as this is a serious annoyance to me with a lot of singers.

"Play On Words" backs off a bit on the progressive stylings, heading more into straight ahead melodic rock territory.  Once again, Lanoue comes across as very much in control, allowing the emotion of the song to carry his voice where it needs to go, rather than the other way around, with Lanoue trying to ramp up the emotion to match the song.  Again, it may seem subtle, but Lanoue never sounds like he is trying to steal the show with his voice.  Northrup gets his first chance to step into the lead soloist spot on this track, and does not disappoint, delivering a cool run on the frets that fits the more straight-up rock style of the track, which is right up the axeman's alley.

Another great example of this is the laid back, quasi-ballad, "Where We Belong".  Lanoue sounds not at all unlike Dennis DeYoung from Styx here, delivering a smooth tenor vocal on this softer moment of the record.  In fact, it reminds me a bit of some of that band's later 70s/earlier 80s output, with the big, progressive, nearly-orchestral feel, with some different percussion instrumentation, an almost-too-speedy guitar solo from JK (did I really just type that???), and an airy, 70s-feeling keyboard solo.  An outlier on the record, to be sure, but still an enjoyable moment that allows the listener to catch his breath before the big drums and hard guitars of "Your Promised Land" kickstart things back in a more aggressive direction, with Northrup absolutely tearing things up on his solo break.

"Larger Than Life" showcases the absolute embarrassment of riches that is present on this album, as Trixter's Steve Brown gets a chance to shine on guitar, and absolutely delivers, which should come as no surprise.  I have always felt Brown was seriously underrated outside of those who are truly fans of the genre, likely because Trixter was not a band people took overly seriously back in their heyday.  People really should give this track...and Brown's work here...a listen to hear just how talented this man truly is.  Check it out below...

"Tow The Line" drifts a bit back more toward that progressive territory of "Given Sight", before "Welcome To My Nightmare" (not the Alice Cooper song), threatens to steal the entire show.  This killer track features one of the grittiest guitar solos on the record...from Mr. Lanoue, himself...despite the fact that it is more of a mid-tempo track, or at least one that is not laced with huge bursts of speed.  "...Nightmare" gives Franklin a bit more room to maneuver here, and once again, the keys here are a nice, supporting element and not overly dominating.  The backing vocals are quite the opposite, however, as they are big and powerful, supporting Lanoue as he drives through the track.  Definitely one of my favorite songs on the album.

Speaking of personal faves, three other tracks come to mind instantly, although all are really well written and performed.  "Demon In My Window" slows things down a bit, again breathing extra life into Franklin's bass (he seems to dominate on the slower numbers here) on this song about ghosts and spirits and hauntings that would have made Ronnie James Dio proud, I think.  In fact, I can here Dio's "evil" vocal edge ever so slightly in Lanoue's approach to the chorus on this track, which also features a nice guitar solo from Thorsten Koehne of Eden's Curse...and a Vincent Price-like laugh to close the track out. "Time To Heal" once again features a bit more of a proggy approach, likely the result of a bit more involvement from Ragno's keys.  The longest song on the album at nearly 7 minutes, I guess you might call this the "epic" track of the record, but don't mistake that for meaning the song is bloated or masturbatory in any way.  The solos here seem to be a bit longer, likely because of the note density on the guitar solo from Circle II Circle's Wentz, but they are not particularly long on the clock, and never do they come across as "hey, look at me" moments.  Once again, Franklin's presence is particularly strong here, especially when the song makes a noticeable downshift in tempo at about the 4:40 mark.

The album's closer definitely pops into my mind as a top song, as "Children Of The Night" is a huge song, incorporating a keyboard intro, galloping rhythm guitars, some very Deep Purple-style organ courtesy of Lanoue's long-time Biloxi partner, Stefan Prescott, and some furious, tight drumming...and that's all in the first 45 seconds, and Lanoue hasn't even joined the party yet! Definitely more of a 70s-inspired rocker, again with some prog overtones, this track features a retro-sounding keyboard solo from Ragno, along with multiple guitar solos, with Lanoue getting the chance to bend the strings on the second solo here, showing he is rather adept on the guitar as well as as a vocalist!  Again, challenging for, and possibly claiming, the top spot on the album "Children..." is an excellent way to round out an overall great debut effort from a band that I truly hope to hear more from in the not-too-distant future.

The mixing and production here is excellent, as is to be expected from anything coming out of Northrup's Alien Productions Studios, and I sorely wish that some "big time" labels would invest in the man's talents, as he truly has a feel for this style of music.  The instruments are crisp and clear, the musicianship is tight, and nothing overpowers anything else, which is so key in my opinion, when dealing with multiple instruments (2 guitars, bass, very present keyboards, drums, and vocals)  all being performed at such high levels of ability.

Posted by arttieTHE1manparty at 6:06 PM