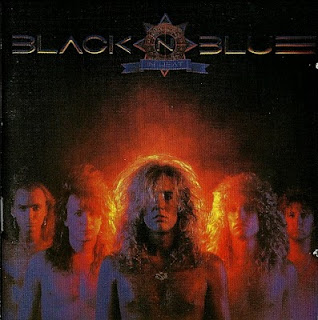 With a brand new album on the horizon from these guys, I thought I would dust off what I consider to be one of the truly underrated albums of the late 1980's and give in a run-down.

I know a lot of people may argue with me, but I still consider this to be the strongest complete album by this group.  Produced by Gene Simmons, and featuring four tracks co-written by Simmons, this album has that kind of dirty sound that so many of the Simmons KISS tracks are noted for...but with far superior vocals!  I know that may sound blasphemous, but there is simply no comparing Gene's semi-lame snarl to the great, gritty-yet-able-to-scream vocals of The Saint, and this album is proof-positive of that.

What the BnB boys have managed to do with "In Heat" is put out an album that has superior production to their previous efforts, has far better writing in general, features more hooks and catchier choruses...in general, simply a much better complete album than they have ever released.  In my opinion, with one exception, there is no weak track here.  That one exception, "The Snake" just doesn't seem to fit the rest of this album, but that's why they invented the skip button!  Other than that, this album features sure-to-be Black N Blue classics like "Rock On", "Sight For Sore Eyes", "Live It Up", and personal favorite and album closer, "Stranger".  Thayer and Woop are a seriously underappreciated guitar tandem and they do not disappoint here.  The solo on "Great Guns of Fire" is a great example of Thayer's skill, and Woop consistently delivers with his rhythm playing.  This album also features the best performances by Holmes and Young, as well, as these songs are all tight and held together in solid fashion.  On older albums, it seemed the band got a bit loose here and there, perhaps even a bit disjointed, but on "In Heat" that is never the case.  While perhaps not as "heavy" as their earlier stuff, this is, for my money, Black N Blue at their absolute best...gritty yet catchy with enough attitude and snarl to keep even the casual listener's attention while also being just polished enough to keep radio...and the ladies...interested!

Having heard a few samples from the new record, I am extremely anxious to hear the whole thing, as it sounds extremely promising.  I guess if the new one falls short of expectations, however, I can always put this great release in for a spin and imagine what could have been...

Back To Review Index
Posted by arttieTHE1manparty at 5:53 PM