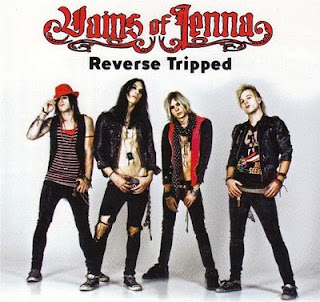 First off, let me start by saying I love Vains Of Jenna.  Along with Crashdiet and Hardcore Superstar, VoJ was one of the first bands of the new generation of sleaze to really catch my attention.  Great look, catchy songs, big hooks, and a filthy sound...what's not to love, right?  Even with the addition of new American singer Jesse Forte, these Swedish sleaze-slingers put out a new EP with some reworked tracks and a new song just to prove they were still at the top of their game.  Things seemed primed for a smokin' new disc from the Hollywood transplants...right???

Well, let me first state that new vocalist Forte is not the problem with "Reverse Tripped"...not by a long shot!  What has me totally lost is why in the world would a relatively new band with a brand new singer release a covers album?!  I simply don't get how the band or their management thought this was a smart move at this point in the band's career.

Don't get me wrong, VoJ does a great job on several of these tracks, but only if you aren't expecting that nasty, sleazy sound that they do so well.  In all honesty, this album is so squeaky clean in its sound you would NEVER have been able to convince me that this was VoJ.  Even on a song like Eddie Grant's "Electric Avenue", which has all sorts of sleaze potential, Vains turns the song into a bland, generic sounding 1970's adult contemporary sounding song...until they inexplicably add a little rap into the middle of it!  The Mamas and Papas classic "California Dreaming" sounds like it could actually still get airplay on an oldies station along side the original.  "Wish You Were Here" does virtually nothing to stray from the way Pink Floyd recorded it originally, and I truly believe Elton John rocked "Goodbye Yellow Brick Road" harder than VoJ does!  "Blowin' In The Wind" is just horrendous and "The Letter" sounds like the band is on cruise control.  And yes, VoJ even manages to turn one of the all-time classic guitar riff songs into a psychadelic snoozefest as they totally mess with the vibe of Deep Purple's "Smoke On The Water".

Is it all bad?  Well, mostly, but there are a couple of decent moments.  Mountain's "Mississippi Queen", while not coming off as overly original or inspired, does at least rock a bit more than most songs here, and The Beatles' "Get Back" is a pretty nice little rendition that has just enough attitude in the vocal performance to forgive the dated-sounding guitars.

Honestly, I wanted to love this disc, especially after hearing the smirky delivery of the Cee Lo Green original "Fuck You" (which is later given the radio-friendly treatment at the end of the disc as "Forget You").  But I can't.  I really wish this tired trend of doing covers albums would go away, as it seems everyone has done one, is doing one, or is planning one.  But if you feel you MUST pick up a covers album this year, do yourself a favor and get Stryper's "The Covering" and leave Vains of Jenna's truly sad performance on the shelf.

Back To Reviews Index
Posted by arttieTHE1manparty at 2:03 PM