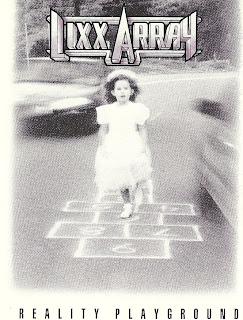 Lixx Array was one of those bands who seemingly had everything it took to be successful on the Sunset Strip...except timing.  These California boys had the look, the style, the overall sound, but just not the luck.  Having released their first single in 1983 and then slugging it out for the next nine or ten years, it would seem that this band, which was certainly better than a lot of those who snagged record deals, would have gotten a shot, but it simply was not to be.

"Reality Playground", the band's 1992 self-released album, features a lot of great arrangements, killer hooks, and average-to-above-average vocal performances.  Stylewise, I think you could draw a musical comparison between bands like Lillian Axe or maybe Hurricane or Lion, but all three of those bands had stronger vocalists than Lixx Array.  In all honesty, Rusty's vocals do take some getting used to, and on a couple of tracks it sounds like he is really forcing the higher end of his range when he may have done himself more favors by staying in a mid-range style.

Stand-out tracks here would include "Bad Man", "Thrills Behind The Wheel",  and "Hearts On The Line".  "Right From The Start" has a nice little guitar solo in it and is also a decent track.  For those seeking the ballads, "Really Hits Home" is a pretty good acoustic number, but the other ballad, "Once In A Lifetime" feels like it has been done a thousand times, which it probably has.  Overall, "Reality Playground" offers nothing exceptionally powerful or overly weak, which is perhaps what the problem was for these guys; they just never really stood out for the good or the bad.

This is an independent release, but overall, the production isn't too bad.  Sure, the drums could use some beefing up in spots, but that doesn't detract from the album's overall feel.  The packaging is definitely of higher quality than most indy releases with a full booklet with lyrics and pictures.

Had this album come out about two, maybe three years earlier, I'm guessing it may have had more of a chance to get noticed and maybe a label would have invested some money in it.  However, by 1992, grunge had taken over and the European/Swedish revival of this type of music was still several years away.  As such, Lixx Array is just another one of those bands that coulda/woulda/shoulda...  If you can find it at a decent price, it's definitely worth a listen but not an album I would shell out $15 or $20 for.