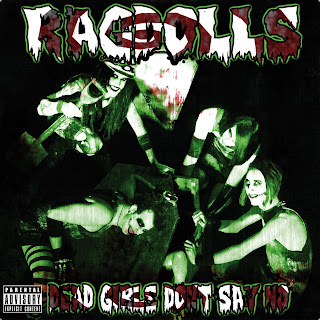 Ragdolls are an interesting band before you ever get to the music.  Just taking a look at the album cover or some of the promo pictures you can tell right away that these guys are not likely all there mentally.  If you like your music to be a mixture of horror movies, sleaze, punk, and a touch of Rob Zombie all thrown into a trashcan and stirred up with a pitchfork, then Ragdolls are likly right up your alley!

These guys obviously have fun with what they are doing, and quite frankly, they do it pretty well.  The opening track is a throwaway intro of sorts incorporating some horror flick screams and moans over a heartbeat rhythm that is there to set the mood for the upcoming show...especially when that heartbeat flatlines at the end of the track.  From there, the band pretty much kicks into high gear and rarely slows down.

"Shut Up and Drink" is a pretty humorous song and the band pays the required level of horror-respect to Vincent Price as they state they would like to drink with him.  The band's attempt at a ballad, "Dead Like Me" is more humorous than slow-dance material, largely because Vikki's vocals are so monotonous and unchanging in their delivery that there is no emotional give and take to the song.  But while the vocals falter here, his voice works fine on other tracks such as the Zombie-esque "Shovels",  "Michelle", and album closer "Gruesome For Some" (nice play on words...).

I have read some reviews that label these guys as punk or horrorpunk, but people looking for old-school punk would be majorly disappointed in picking up Ragdolls.  This is not the Sex Pistols, the Clash, or even the Ramones or Circle Jerks  As I stated in the opening paragraph, these guys have a lot more sleaze than punk to their sound, and the vocals are far more deliberately delivered than most punk.  Again, think of Rob Zombie's growling type of vocals over more of a Shout At The Devil-era Crue soundtrack.  "I'm A Werewolf" is probably the closest the band comes to a true punk rock sound, and it comes off well with the humorous lyrics (at least I was chuckling at them).  "House Of Horror", clocking in at just over 2:30 after the intro, is another higher energy track that some punks might find themselves nodding their heads to, but I don't think any violent slamdancing will break out by any means.

This album is not earthshaking by any means, but it is not meant to be, either.  I don't know that I would sit down and just pull this disc out as part of the regular day's playlist, but I could definitely see myself playing it for a Halloween or theme night party of some sort.  Trust me, I get it...it's one big running scary movie joke, and that's fine.  But, for me, the horror flick intros to the majority of the songs wear a bit thin, and Vikki's lack of vocal inflection and style change really limit what the band can do with the material they have to work with.

Rating:  Rock this at 6 after midnight, during a full moon, or on Halloween...but only a 4.5 otherwise!

Back To Reviews Index
Posted by arttieTHE1manparty at 6:06 PM