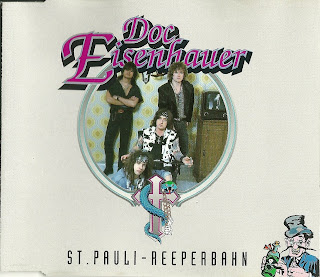 I don't remember where I got this three song promo, but I remember liking it immediately.  The songs are catchy and high-energy rockers with plenty of hooks in them.  Koop's vocals will remind some of the lead singer of Pretty Maids at times, with perhaps just a hint of Udo Dirkschneider thrown in.  Guitars abound on these songs as well, and Roland Feldmann pulls of some great solos, especially in the first two songs.  In fact, something about the song structure and the performance of those first two songs, especially "Dr. Whisky" (yes, that spelling is correct), reminds me of Damn Yankees, a la "Piledriver".  Koop sings most of the chorus in English, so can tell you that they are declaring that "Dr. Whisky is my best friend" in this song, which is obviously an ode to their favorite adult beverage.  The last track here, "Vampir" is a slower, but powerful track, definitely not the prototypical power ballad or anything like that.

I was able to find out that all three of these songs would later appear on the band's full length album "Alles im Lack", but other than that, I really don't know a lot...except that this is a fun little gem to pull out from time to time.  I've ripped it to my computer and mixed it in with my other favorite sleazy tracks and it flows along very nicely.  The production is top notch with nice volume levels, which is sometimes not the case with some imports I have come across, but since RCA released this, that is not really such a shock.  All in all, if you can find this EP, or the full-length release for that matter, I would not hesitate to pick them up...even if you don't speak German!

Rating:  Crank it to 8...and get a German-to-English dictionary!

Back To Reviews Index
Posted by arttieTHE1manparty at 10:18 AM