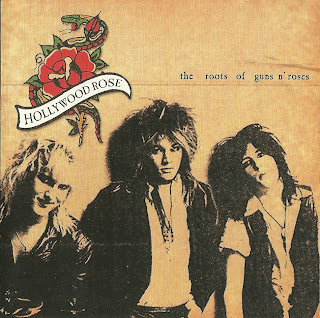 There was a time when ANYTHING that was associated with Guns N' Roses was going to sell, for one reason or another.  Deadline Records was fully aware that Axl was likely still years away from his next GnR album and took advantage of the band's fans' hunger for new material when they put out this collection of demo tracks from the pre-GnR band Hollywood Rose.  Consisting of future Gunners Axl and Izzy, along with a couple of now-no-names, this incarnation of the future mega-band recorded the original five tracks on this disc in 1984.  Naturally, Axl got angry (when isn't he angry) and filed a lawsuit to try to keep this collection from being released, but he must have failed because it is out there for all to grab.

I have to be honest...I think I know why Axl filed suit to keep these tracks from being released.  Simply put, they are not good.  "Anything Goes" is NOT the same track you hear on the legendary Appetite For Destruction  with the exception of the chorus.  "Rocker" is a revved-up, yet lyrically lame, attempt to explain the lifestyle being lived by Rose and his motley gang of musicians, and "Killing Time"...well, I'm not real sure what that is even about!  The most interesting of the songs here are the last two, "Shadow Of Your Love" and "Reckless Life" as both were co-written by not only Axl and Izzy, but also Duff McKagen and Slash, who gets co-write credits under his actual last name of Hudson.  While neither is a particularly strong song, they would show a bit more of where the band would be headed in the future.

Tracks 6-10 are the same as the first five except these were all remixed by one-time Gunner, Gilby Clarke.  Additionally, another future-ex-Gunner, Tracii Guns, ads guitar overdubs to "Shadow..." and "Reckless Life".  The final five tracks, 11-15 are again the same five songs, this time remixed by Cinderella drummer, Fred Coury.

In all honesty, I only purchased this album because I was in a record store planning to buy a CD but it had not come in.  With some cash burning a hole in my pocket, I decided to take a chance on this.  I wish I hadn't.  Other than for nostalgia and collection purposes, I really don't see a reason to own this.  The two tracks with Tracii Guns on them are decent, but, come on...no one really needs to hear three slightly different versions of the same, demo-quality songs.  We all know how great this band was going to be in very short order, but at this time, this is NOT the Guns N Roses we came to love.

Posted by arttieTHE1manparty at 5:34 PM