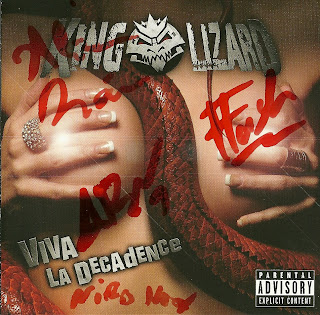 Hailing from Great Britain, KING LIZARD yet another entry into the European glam/sleaze scene.  While not nearly as well stocked as Sweden, for example, Great Britain has been churning out quite a few solid bands lately, and KING LIZARD is among the latest examples.

Released at the end of 2010, "Viva La Decadence", the song, is a raucous anthem to the sleazy lifestyle, and is a killer way to open the album.  The track has a strong, memorable hook, screaming guitars, and wailing vocals right out of the gate.  In all seriousness, this is one of the catchiest first efforts I have heard from a band in quite some time and, honestly, the band could probably have stood pat on this debut release with that one track and garnered enough attention for people to seek out their next effort.  Thankfully, that didn't happen.  There are several memorable cuts on this disc, with "Rain On You", "Hell Yeah", "Kan't Kill Rock N Roll" and "Late Nite Dynamite" is a full-speed send off that closes the album in fine fashion!  Of course, it is almost a requisite for bands to include a ballad of some sort, and KING LIZARD turns out a fine effort on "Not For Me".  It's almost scary how much Flash sounds like Axl Rose on this track, but the song itself is not necessarily reminiscant of a Guns N Roses song, and certainly not a rip off track of any kind.

This album is not without its flaws, however.  The production seems just a tad thin in places which does add a bit of rawness do some tracks while making others sound a bit weaker than they probably should have.  Additionally, a couple of the tracks come off as forced and don't really seem to fit the flow of the album as a whole.  A perfect example is the song "Riot" which starts off with a LONG piano intro that really doesn't seem to fit the unique, somewhat disjointed rhythm of the rest of the song.  "Never Be Mine", which clocks in at just over six minutes long, could easily be cut down to about four minutes and be a much stronger song for it, in my opinion.  These are minor detractions, however, and do not kill the album by any stretch.

It is important to keep in mind that this is a first effort, and I look forward to hearing what this energetic, rowdy, ambitious band comes up with for its next go round.  I would imagine that these boys put on a great live show and if the video to the title track is any indication, their performances match the energy of most of the tracks on this very solid debut album.

By the way, my copy is autographed by the band, as you can see from the photo above.  The cover, incidentally, comes in two forms, both identical except for the slight censoring that is present on this one.  My understanding is the uncensored cover has sold out, so perhaps it will have some sort of collector's value at some point.

Rating:  Crank it to 9!
www.kinglizard.co.uk

Back To Reviews Index
Posted by arttieTHE1manparty at 10:37 AM