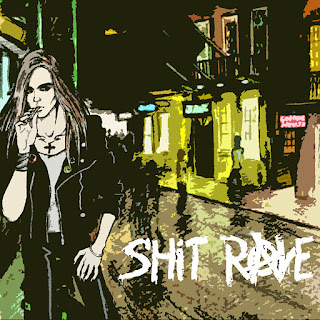 Hmmmm....well, when a band calls themselves Shit Rave, you kinda have to wonder what exactly you are getting into when you decide to give their album a spin.  I mean....Shit Rave?  Well, I think this may be one of those cases where a name sounds cooler if you are from a non-English-speaking country, as is the case with this five piece sleaze outfit from Kaliningrad, Russia (never even heard of the place, so I Googled it...it's a Russian seaport city, so there's your geography lesson for the day!).  Shit Rave (man, I feel stupid typing that name...) lists bands such as Skid Row, Guns N Roses, Hardcore Superstar, Pantera, Sex Pistols, and Mars Volta as influences.  While I can tell you there are DEFINITE Skis, GnR, Pistols, and Hardcore Superstar sounds here, I'm not so sure about the Pantera or Mars Volta stuff...but it's their band, so they can be influenced by whomever they choose, right?

With only three songs on this newly released EP, the band doesn't waste any time with intros or ballads or anything like that.  These guys simply kick the door in, plug in, and immediately start tearing things up with their punked-up sleaze assault!  This is some seriously aggressive music here and it is played with a surprising level of skill.  Considering they have only been a band since 2010, it would seem these guys have spent a lot of time playing and gigging together as they are a very tight unit with a great sound.  The twin guitars of David and Michael are a perfect tag team, and the backline of Romich and Dima rumble and pound their way through each of these high-octane tracks.  Paul's voice has a certain snarl to it that I can't quite put my finger on...he reminds me of someone, but I can't tell you exactly who.  He sticks to an upper-tenor register for the majority of the material and, as he does on a couple of occasions on "Right Line" he is perfectly capable of ripping into a sleaze-infused falsetto screech which serves to accentuate the sound.

I am not sure who plays lead and who is the rhythm guitarist here, but there are KILLER solos in each of these tracks, with the lead in "Right Line" being one of the better solos I have heard in 2011...seriously.  There is a lot of nimble string-bending going on with this track.  While all of the tracks here are up-tempo rockers, "When You're Livin' Alone" takes things a notch higher, kicking things into more of a punk pace, especially at the outset.  Don't let that fool you, however, into thinking that this is a sloppy song, because it is not.  There are numerous places where the guitars drop in and rip off mini leads, and there is a really cool break-down in the song's tempo at about the 1:45 mark where the entire band slides into a really cool groove and Paul let's his vocals stretch and skate over the top of the funky track.  This is a seriously cool song that has immediately found its way onto my personal mp3 player already...I LOVE this track!  "Suicide Superstars" is another cool track but I think there is some difficulty in lyrical translation on this one as some of the words don't really seem to make sense, at least what I can make out.  I would love to see a lyrics sheet on these songs because, for the most part, the band seems to have a pretty good grasp on English but something sounds off here.  Lyrical problems aside, this is another great, sleazy track that features a simpler, understated solo and some excellent drum work.

Three songs...two solid efforts and one contender for song of the year for me (I just love "Whe You're Livin' Alone"!).  This is a great start for an extremely promising young band.  Much like the release by John Galt, you would have a very hard time convincing me that this is not a Swedish sleaze band...or even an American Sunset Strip band from back in the day.  Once again, the production on this independent release is excellent with a nearly perfect mix, not allowing any instrument to dominate and not drowning anyone out.  Outside of the possible lyrical misinterpretation, and the really bizarre band name, I have nothing negative to say about this release other than the fact that it is not even 10 minutes long.  If these guys can come up with four or five more tracks of this quality, and maybe work up a seriously kickin', attitude-infused ballad to throw in for the ladies, I think you could be looking at one of the hottest bands of the recent sleaze infusion from Europe!

Rating:  No reason not to crank this to 9, even if it for only a few minutes!

Back To Reviews Index
Posted by arttieTHE1manparty at 10:29 AM