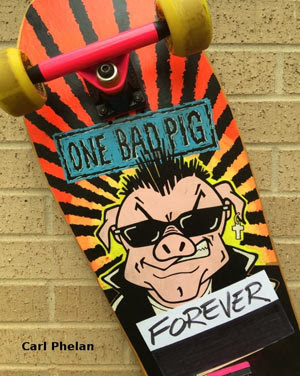 2016 is shaping up to be an interesting year for Christian skate punk/thrash pioneers, One Bad Pig.  Not only are there rumors of a new record and a summer tour of sorts, but 2016 also sees the release of the long-rumored, LONGER awaited One Bad Pig biography, One Bad Pig Forever.  I have been a fan of this band for close to 30 years now, and as such, I can't even begin to tell you how long I have waited for this book to come out.

Ultimately, I wish the author had taken a bit longer and kept me waiting a few weeks or months more.

While I understand that an undertaking of a book such as this a huge project, it is one that should be done as professionally and meticulously as possible, in my opinion, as books about bands such as One Bad Pig are so preciously few and far between that you want them to be great when you finally get them.  This book does not reach the level of greatness.  However. to be fair, it is also not a biography in the traditional sense, so much as it is a fan-memoir of the band.  As such, it gets more of a passing grade, although I am not going to lie and say that I do not still have areas of disappointment, mostly due to a personal love of the band.

For starters, I hate the format.  I'm sorry, I just do.  I don't like books of ANY kind that are the big, cumbersome 8 x 10 format, especially if they are paperback, as this size just begs for damage to be inflicted upon the cover or pages.  The pages are too floppy at this size, again an even bigger problem in paperback format, and the size isn't conducive to taking the book along with you to sneak a few pages' worth of reading when you have a spare moment.  But this issue is minor.

I don't know if budgetary restraints were an issue, or if it was the lack of a big-name publisher, or some outside force that I am unaware of, but there is a serious problem with the editing of this book.  There is, quite literally, no flow in how the book jumps around at times.  As an example, on page 113 of the book, under the chapter sub-title of "OBP Extends Their Punk Rock Music Endeavors", the author is talking about the band's 1986 touring schedule.

Now, aside from the bizarre use of single quotation marks...or ANY quotation marks, for that matter...around proper names of bands, and the strange way the date is represented (IN June 11th, 1986???), this isn't a horrible introductory paragraph.  It flows fairly well.  But the VERY NEXT paragraph makes a time-shift jump forward that would make Michael J. Fox proud in Back To The Future II.

Huh?  Where did those 27 years go?  How long was this tour?!  Well, the answer is nowhere, because two paragraphs later...

"On September 24th,,1986 a fund raiser was held for the ACAA Messenger at the Christian Coffee House at The Tabernacle of the Congregation Church at the corner of South 1st street and Stassney Lane.  Featured bands will be 'Alliance', 'One Bad Pig', 'The Larry Perry Band', 'Paul Q=Pek Band' and 'Rapture'.  All the money donated at the Benefit will be used by The ACAA to print and distribute the Messenger Newsletter."

All punctuation, capitalization, etc., is straight out of the book, including the odd quotation marks again, the double commas, and the strange decision to incorporate an address.

I know, I know...this sounds like I'm nitpicking, and I might be...except this display of a lack of any kind of editing occurs all throughout the book, as do the time frame jumps, repetition of the same facts in multiple places (sometimes SEVERAL places), misspellings, and odd exclusions.

Another point of serious contention that I have is the way the book references ITSELF in places, making this feel less like a completed project and more like an outline.  Example from page 137:

"In late Fall of 1991 Paul Q-Pek moved to Nashville, TN.  He continued to perform with OBP, sometimes he would drive to their concerts and on a few occasions he would schedule a flight.  Later in 1992 Paul Q-Pek left OBP to pursue a solo career.  He stayed in Nashville until 2000 when he moved to California.  The rest of Paul's story will be in the Auto Bio section of this book."

Okay, again ignoring the poor grammar and editing, this auto-referencing is at least odd, and at worst, a huge disruption to any type of reading flow.  Again, I do understand that this is not a traditional biography, so some of this needs to be given a pass, but it does make it a bit difficult to read when it recurs repeatedly.

The book is listed as having 28 chapters total, but some of these "chapters" are no more than one paragraph (Chapter 11, for example, is one paragraph on page 147, and Chapter 16 on page 157 is TWO SENTENCES!).  The book starts with "Chapter Zero", which is a seemingly random collection of autobiographical submissions from present and past band members, fans, and others associated with the band.  Not necessarily bad things to have included, but probably not at the start of the book (the first 94 PAGES of the book!), and probably not without some sort of formatting so that we get more uniformity in how these autobiographical snippets are included, as they range from a few paragraphs to a few pages, all depending upon who submitted what, apparently.  There is also nothing from, or about, bassist Brian "Streak" Wheeler included in the biography/autobiography section, either, which I found odd, but there's a whole section about The Band In Black, a Johnny Cash tribute band that a couple of members/former members of OBP play in.  Just...so...random.

Now, not all is horrible with this book, as there are several cool photos included (although NONE are color), some interesting information about the band, their interaction with Johnny Cash and Bob Hartman (of Petra), and some nice concert stories.  The concert flyers and posters are a nice inclusion as well.  And, as odd as they are in length and randomness, the bios do provide some pretty cool information and background about members, one-off players, and contributors to the band.  But I question why people like the legendary Phil Keaggy, or Hartman, or Dann Huff, or any of about a dozen big name artists who have been involved with the Pig throughout the years, were not interviewed...or even mentioned, in some instances.

The author, Carl Phelan, is, by his own admission in HIS autobiographical entry, 86 years old.  He has, as far as I can tell, written exactly one other book...when he was 83...about the Christian rock band Flyleaf entitled Flyleaf Spreads Their Wings.  Perhaps...and I'm totally surmising here...his knowledge of research for a project such as this is relatively limited, so not all stones were left unturned.  Speaking of "relatives", from what I can gather, Phelan is the grandfather of one of Flyleaf's guitar players, Jarrod Hartmann, and I have to believe he is also related to (father of, perhaps?), one of the original members of One Bad Pig, Kevin "Squealin'" Phelan, although that fact is never really laid out anywhere, unless I missed it somewhere.  Again, this is HIS memoir and HIS labor of love for the band, which I completely understand, but if he has such a perfect and unique insight into the history of the band as to have had a relative play in it, I wish he would have connected the dots and tied it in for me.  I can be kind of thick-headed at times, and the history teacher in me always wants sources....

It pains me to write a review about this project in such a manner because I absolutely LOVE this band, as anyone who knows me would attest to.  I have corresponded with band members, I have all of the albums, several bootlegs, and a video, and I have collected memorabilia through the years. I even have the band staring down at me as I type this...granted, it's an autographed 8x10 photo, but still...I LOVE this band.  But I don't love the book.  I don't hate it by any means, I just don't love it and feel that it could've been so much more.  As I've mentioned it's very incomplete feeling, and very difficult to read at times in book fashion.  I'm glad I have it for what it is, and I have zero desire to get rid of it, but I truly feel it could've, and should've, been so much more.

To order the book, you can go to Amazon, or you can order from the author directly at www.onebadpigforever.com and receive a copy signed by Mr. Phelan.