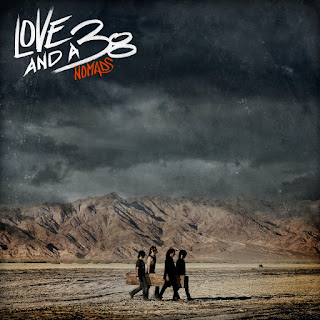 Love And A .38 is a Los Angeles-based hard rock band in the simplest, purest form.  They are not metal.  They aren't punk.  They aren't prog, thrash, modern alternative, or any other label you want to put on them.  With Love And A .38, you are simply treated to straight forward, from the gut, rock n roll played with a raw, snarling emotion and a simple game plan: pick it up, plug it in, let it rip, and see what comes out.  Slightly sleazy in places and gritty in every aspect of the word, this could best be described as hard street rock, unpretty and to the point.  There is no window dressing here, nothing hidden behind a curtain....just four guys with a desire to do things one way, and that's their way.

I hesitate to use the comparison, because people are going to think about it in the wrong way, but I can't help but compare these guys to Guns N Roses in their earliest days.  Tons of attitude, lots of sweat, booze-fueled swagger, and a desire to kick you in the teeth with their music.  Do they sound like GnR?  No, that's not the point.  It's that unabashed all-for-one attitude that GnR presented when they were young and hungry that I feel present in Love And A .38, as well.

Take one listen to the album's opener, "Oh My God", and you will hear what I am talking about.  Straight-up bad-assery is what you get here, as the band comes kicking in with a simple stomp-along march cadence, started first with just drums, then accompanied by a matching bass and guitar line.  But it's when Hudson's vocals spit their way into the track that you realize this band isn't kidding around here...they're going for your throat, and they are attacking through the ears to do it (which would be one incredibly painful way to go about things if you think about it!)  Domo allows a tasty solo to slither into the mix, slinking in unannounced, but making sure you take notice before he slips out the back door and dives right back into the mix.

"Just Like Regret" is another catchy, guitar-driven rocker with a straight-from-the-barroom beat that is catchy as heck and yet so simple you wonder why other bands haven't come up with a song like this before.  "Went Away" follows suit, packing true punch into the rhythm that starts the track off, with Hudson's scratchy-throated wailing on the chorus delivering an emotive punch that the "listen to me whine" vocals of so many rock bands today simply fail to capture.  Again, its not some incredibly intricate musical approach that drives this song home, but the raw, unfiltered emotion and the blood that is left on the strings and the skins that let the listener know that these guys mean what they play and are in it for the music and for the listener, not for the dollars.

One of my two absolute faves on the record, "Abre Los Ojos" teases a ballad at the beginning, but the driving, impassioned rock oozes up from beneath the simple guitar riffs and bass line that open up this powerfully emotive song that also showcases Hudson's ability to sing, not just snarl.  Some awesome lyrics can be found in this one as well, as Hudson intones, "I'm a bastard, I'm a liar, I'm a thief who will conspire...to steal all your desire...", and "ain't no sunrise when you wake up all alone, right back at the start".  Just some great songwriting on this one, to be sure.

"Big Leg Betty" slams a dose of raunch-and-roll into this track, with big, loud guitars and a catchy, surf-rock styled rhythm guitar line, along with yet another crisp guitar solo from Domo.  The catchy, jangly riff of "Holy War" will instantly draw you in and sets the stage for more of Hudson's gritty vocals and a very cool, yet not flashy, guitar solo that are balanced perfectly atop the incessant drive of Emrod and Skelton.

"I Won't Wait" is pure sass and adrenaline, and easily the fastest number on the album.  Kicking in with a simple cymbal rhythm, the song charges ahead for a few seconds before backing off to be mostly drums and Hudson for most of the verse, before again launching itself into a hard-charging, full-throttle rocker, again complete with a Guns N Rose's styled, ripping guitar solo that really allows Domo to stretch the strings and showcase his obvious skill.

"Born To Make Me Die" has a total spaghetti western feel to the intro, and its easy to envision dust and tumbleweeds blowing across the stage as the guys launch into this tune.  Domo's guitar tones are absolutely haunting here, and the galloping cadence of Skelton's drums is accentuated by the rumbling bass line Emrod hammers into place.  Probably my favorite track of the record, this song gets put on repeat a couple of times when I spin Nomads, as it is just so dang catchy that I can't help myself!

The album closes with yet another fist pounding, head banging rocker, as "Get It Right" packs an unpolished wallop at the end of the record, from the muffled thud of the kick drums, to the buzzsaw rhythm guitars, to the bloodied-throat rasp of Hudson's vocals.  Emrod gets into the action as well, laying down a cool bass groove during the bridge section, which allows Hudson to work his way up from a near-whisper to a full-on yowl before charging back into the final simple-yet-catchy chorus.

If you are looking for big hair, big reverb, or big polish on a record, look elsewhere, because it ain't gonna be found on Nomads.  Similarly, if you are looking for tons of programming and effects, you had just as well skip right on past this record because none of that will be found anywhere near Love And A .38.  But if you are looking for a truly in-your-face, raw, hard rocking record, then Nomads is going to fit that bill perfectly for most people.  This band has the potential to be a game-changer in the rock scene, so jump into the game now and hear what the next big thing just might sound like!

Man, I dig this record!