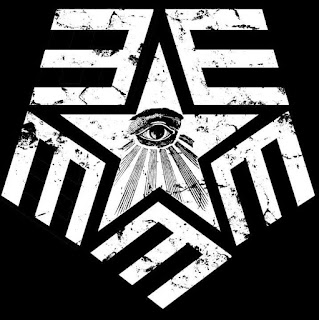 Apparently there is more to Nebraska than just corn and cattle, as yet another Cornhusker State metal project has found its way into my hands, and it is yet another solid offering from a band that most people outside of the Midwest metal scene have likely never heard of.  That situation will hopefully remedy itself as Empires End delivers a very strong debut with their self-titled EP which will be released to the public this month (February, 2016) in their hometown of Kearney, NE.  If that town rings a bell with some readers here, it is possibly because this is also the hometown of the band that owned our number 19 album of the year for 2016, Slantpiece.  In fact, Empires End and Slantpiece share Wryan Carpenter who performs admirably here on guitar and backing vocals (he is the bassist for Slantpiece as well).

Aside from Carpenter being in both bands, don't expect tons of cross-over in terms of style and sound, as Empires End is much more straight forward in their attack, combining elements of classic metal and thrash, leaving out the doom/stoner/sludge sounds of their distant cousin.  This is immediately evident when "Broken Man" kicks the door in to open this EP.  The guitars fade their way in to get things going, and almost immediately the powerful drums of Chapin are set off and a throbbing bass line from Policky begins to churn like a moshpit, laying down the platform for Biggs to come bellowing through on the verse and chorus sections.  There are some nice machine-gun styled drums here, as well as some Zakk Wylde-inspired guitar effects and EXTREMELY tight rhythm guitars shredding through the middle of this track, although there is never what I would really call a "solo", per se.  There is some really strong guitar work here, however, just never an actual solo.

"Wasted Words" has a VERY thrash-styled interplay between the drums and the rhythm guitar to open the track, which then morphs into a hardcore-styled song structure reminiscent of the stuff done by Six Feet Deep and similar bands.  In fact, if I was to compare Empires End to any band it would be this fairly obscure thrashcore band from the early 90's, as the music, and even Biggs' vocal style is relatively similar in nature.  Funny thing is, I highly doubt these guys have ever even heard of Six Feet Deep, as they were on a small, independent Christian metal label and received little to no attention on the national scene.  But that's for another day and another review...

"Undone" carries on the tradition of angst-filled, aggressive metallic throat punches, with even more solid drum and bass work and that relentless rhythm guitar assault that Empires End utilizes to such great effectiveness.  Trust me when I say that there are seasoned bands out there with many years more touring and recording experience that lack the overall tightness that these four Nebraska boys possess.  Chunky, crunchy, and tough, "Undone" has one of those swirling-type of rhythms to it that you know will whip up a churning moshpit behind those headbangers who are content to windmill their hair and give themselves whiplash on the railing!

"One Day" slows things down a bit...at least temporarily...as it starts off with some really cool, laid back guitars and a simple drum track, before Chapin drops in a nice bass groove and the relative calm of the song starts to come undone about 45 seconds in as the pace picks up moderately and Biggs' snarl comes barking in.  A cool song that just BEGS for a ripping guitar solo, but one that is is still solid in its current form, especially with the really nice intro and outro guitar efforts.  The guitar line throughout the main course of the song does get a bit repetitive, but not distractingly so, and the slow-burn of aggression on this song keeps it from dragging into a state of sameness.

"I, Alive" battles with "Broken Man" for my favorite track on the record and sports a massive bass/rhythm guitar line that is just pummeling in its approach.  There are some nice guitar tones throughout this track and a really cool stop-start rhythm that doesn't follow typical patterns, keeping the listener's attention focused throughout.  There is a breakdown of sorts before the final chorus that, once again, feels like it is waiting for a solo to come screaming in, but it is short and there are harmonic elements to the guitars here that provide a nice dynamic in the absence of a true solo.

"Rising" closes things out, and once again, Biggs' aggro vocals are particularly strong, and there is some really cool drum work from Chapin here.  An aggressive chugga-chugga guitar section and some thunderous double bass from Chapin thrust the song through an extended bridge, before the final chorus burst from Biggs, a quick false ending, and then a crushing blow to slam the door shut on this sonic assault.

All in all, a really solid debut effort from a band that has not been together all that long and is still honing its craft and sound.  The rhythm section is extremely tight, with Chapin flashing some nice machine-gun snare and pulsating double bass in several spots, and Policky utilizing some atypical patterns and bass runs to keep the songs driving forward while also maintaining interest in the areas that really, in all fairness, could use some additional support from a lead guitar.  In fact, that would be my only real complaint here, as everything else about this debut is solid.  The rhythm guitars are crisp and crunchy, the drum and bass lines catchy, and Bigg's vocals carry a nice, lower-end angst that serves his aggressive vocal approach well.  The song-writing is above average with some very catchy songs here, and the production and mix are spot-on, thanks in large part to the band's decision to utilize Michael Beck (Red Dragon Cartel) as the mixer as well as the man to master the entire project.

Packaging is simple here, with the insert being a single-fold sheet with a band photo, line-up info, production credits, and a thank-you list.  Lyrics are not included, but Biggs is easy enough to understand throughout the project.

Hopefully Empires End continues to move forward and to hone their skills, as there is a lot of promise in this band and I enjoy this punchy EP from start to finish.

To order the CD, contact the band directly through Facebook, as I don't know that it is available anywhere else at this time.

Back To Reviews Index
Posted by arttieTHE1manparty at 10:05 AM