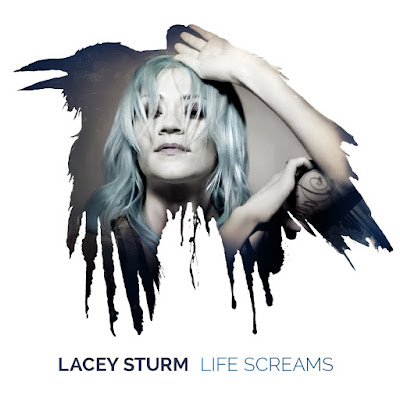 It's been nearly four years since Lacey Sturm stepped away from the highly successful crossover Christian band, Flyleaf, leaving behind the chart-topping albums, large tours, and screaming fans.  That doesn't mean, however, that Sturm was sitting idly by, as she kept herself busy writing her quasi-autobiography, The Reason (check our review here), as well as lending her powerful shrieks to fellow Christian rockers, We As Human on their hit, "Take The Bullets Away".  She has also done a good share of motivational speaking to teens and young adults across the country, so its not as if she wasn't doing things.

Apparently she was also preparing to rock again!

Sturm shows that the time away has done little to quell the power in her emotionally-charged screams, nor has it tamed her passionate singing voice, as this album comes out swinging from track one.  Now, to be fair, that opening track does tease the listener a bit, as the song opens with some very laid back, chanted "ahhs" from Sturm, not sounding anything like what "Impossible" will morph into in mere moments.  Co-written by Skillet's Korey Cooper, the album's lead single features a somewhat dub-step styled drum pattern which drags the song forward through the first verse, allowing Sturm's lungs to expand adequately to unleash her instantly recognizable vocals once the chorus hits.  Whether she is singing with that slightly odd, vibrato infused warble or tearing her vocal chords to shreds, Sturm's voice is one that sounds little like anyone else, and Flyleaf fans...especially those unhappy with that band's current vocalist and direction...will be happy to hear Lacey back in the vocal saddle, doing what she has always done.

In fact, it's fair to say that much of the material here sounds like it could have been a new Flyleaf album, and I think that's at least partly the plan here.  Granted, Sturm did a lot of writing in her old band, so it is only logical that her style and sound might be relatively similar, but the band that she has assembled really executes the songs well here, which, let's be honest, is not always the case when a singer puts together a "solo band".  Lacey's husband, Josh, handles the guitars here with a large degree of success, but for me, the real heart and soul of this assemblage of musicians is the bass work of Hull and the drumming of Rodaniche.  Take for example opening lines of "The Soldier", where Hull's bass line instantly sets the tone for this mid-tempo rocker, or the way the rhythm and bounce of "I'm Not Laughing", sets the stage for an impish rocker that is every bit as catchy in its approach as the bass and drum line on Green Day's song, "Longview".

Track 4 is a throwaway intro that is two people arguing for nearly two minutes, setting up the powerful rocker, "Rot", which is one of my favorite songs on the album.  A haunting guitar chimes in, with Hull's urgent bass line propelling the song forward as Rodaniche's drums build up to a thunderous, pulsating stomp, setting the stage for some of Sturm's most angry sounding vocals on the record.

"You're Not Alone" is a positive, up-tempo number, and Skillet's Cooper co-wrote "Feels Like Forever", which, while solid, is not quite as strong or impactful as "Impossible", in my opinion.

The band has a few slower moments to alternate with the speaker-rupturing rockers, with the best being the album's title track, "Life Screams", which really allows Sturm to showcase her singing (rather than screaming) in a positive, uplifting track filled with emotional, breathy moments, and some nice piano layered in the background to add depth to this balladesque track.  The album also closes on a very quite note, with "Run To You" not even really turning the amps on until about 3/4 of the way through the song.  Again, Sturm shows that there is a lot more to her vocally than just the shrieks she has become well known for.

One real surprise here was the decision to tackle the classic rock staple, "Roxanne", by the Police...and to tackle it in a live format, no less.  Shedding the rather reggae approach of the original, Sturm takes the song to a darker place, musically, slowing the tempo down significantly, beefing up the guitars and bass, mixing in some heavy drums, and then drenching it all in her sass-filled vocals, particularly on the chorus, where her yowl on the word "light" is unmistakable.  I wasn't sure how I would feel about this song at first, and while I'm not going to say that it supplants the work of Sting and Company, it is definitely not a case of a band just taking a song and playing it as closely as possible to the original.  This is a band taking a well-known song, stripping away virtually everything except the lyrics, and then rebuilding it in a way that redefines the track.  Bravo to the band for the daring to do such a thing.

The production is very well done, with no glaring weaknesses, which can be a concern on an  independent release, but probably shouldn't come as a shock considering Sturm's stature in the rock community.  The packaging is a tri-fold cardboard slipcase, which also includes a lyrics sheet, writing credits, thank-you's etc.  The lyrics are somewhat difficult to read as they are hand-written in appearance and are accompanied by the doodles and drawings that Sturm scattered throughout her book, but you can make them out, especially if you are listening to the songs as well.  Also of interest to some of her fans will be the inclusion of "The Flyleaf Family" in Sturm's list of thank-yous.

A very solid record and an excellent solo effort for Sturm.  I would imagine that several songs here will find their way up the modern and Christian rock charts as long as programmers are not put-off by the split with Flyleaf, which they really shouldn't even consider as an issue.

Rating:  Considering I was never a Flyleaf fan, per se, I found myself really enjoying this record.  Crank it to 7.5!


Back To Reviews Index
Posted by arttieTHE1manparty at 11:12 AM