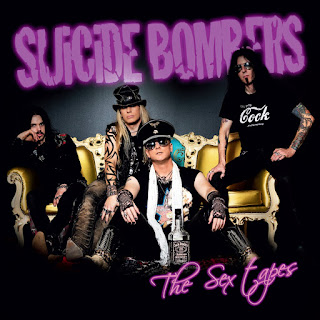 Norway's sleaziest export, The Suicide Bombers, come oozing back for a second round of unadulterated gutter rock.  I mean, what else could you expect from an album called The Sex Tapes?  If you were looking for high brow material here, you came looking in the wrong place, as Suicide Bombers take you on a tour of the seedier side of hard rock, complete with snarling vocals, some excellent guitar work, suprisingly top-notch production, and exceedingly solid songwriting.

Ranking right up there with the best of the New Wave of European Sleaze and Hair Metal, as far as I am concerned, The Sex Tapes may be the best EP you haven't heard in a LONG time, and it is more than a step or two above their previous effort, which is saying something considering Criminal Record was a Top 25 record for G2G just a couple of short years ago in 2012.

Retaining 3/4 of the line-up from Criminal Record surely helped the band to retain the style and sound they were after, with new bassist, C. Slim, being the newcomer to the insanity, and  slipping right into the mix seamlessly.  In fact, I think the bass work on this record is more solid than on the debut, as Slim is lock-step with the rhythm guitar and drums throughout much of the record, yet there is enough personality in the performance to keep it from sounding like the work was phoned in.

Skipping the intro for now (much more on this later), the album kicks into high gear with "Bladerunner (Tokyo Nights)", which is a relentless, no-holds-barred sleaze rocker right from the word "Go!", with a full-force rock anthem that reminds me a lot musically of some of Ratt's best early work in the guitar tones, but with a bit of Zodiac Mindwarp and the Love Reaction thrown into the mix as far as the way Doll attacks the microphone.  This approach works so darn well, the band carrys it over to the following track, "iKill (Suicide Romeo)", complete with some ripping guitar work from Leather (who looks like C.C. DeVille and Zakk Wylde's lovechild...wearing Slash's hat!) and a kicking vocal approach from Doll that reminds me so much of the way Warrior Soul, or the previously mentioned Zodiac Mindwarp, sounded many moons ago:  gritty, angry, and packed with attitude.  The rhythm section is just so tight on this track that it punches you in the face right from the start, then grabs you by the throat and drags you along for a ride!  If I was forced to pick a favorite track from this album, "iKill" would be the one I would point to, which is tough where there is nothing I don't like here as far as the musical tracks go.

"Planets Collide" slithers back to a slightly more mid-tempo number, but it rocks hard nonetheless.  Doll's vocals retain that snarling grit, with the rest of the band contributing a bit cleaner, yet shouted, backing vocals on the chorus.

"X.I. Thing" picks things right back up with another sleaze-anthem in waiting, as Doll turns up the innuendo in the lyrics and Leather's guitar slinks and slides all over the place, screaming for the listener's attention, but not at the expense of the other performances here.

"Boyfriend (Sha-la-la)" has a definite Hanoi Rocks-meets-T. Rex feel to it, which believe me, is a good thing!  Again, a really nice, yet not over-the-top guitar solo fits the song's style and approach perfectly, as do the 70s inspired handclaps and the "Sha-la-la" tag.  The band backs off the throttle a bit here, but if you are questioning if the band slides into ballad territory here, the answer is definitely no. Very cool stuff, indeed!

"Devolicious Boys" rounds out the musical portion of the album...and was, interestingly, the lead video for the record...and is very reminiscent of the Faster Pussycat approach to sleaze, mixing just enough of the catchy Hollywood hairspray approach into the sound to keep it just accessible enough to the average hard rock fan, while also keeping the sexuality, sass and attitude firmly in place so that hopefully Suicide Bombers will be able to continue to grow their fan base among both the hardcore sleazers and those who want their sleaze with at least a small dose of sugar.  For the musically astute, you may recognize this as a cover of a song by the fairly obscure band, the 80s/90s Norwegian sleaze rockers Backstreet Girls, but Suicide Bombers kick the snot outta the original here, totally owning this song and making me wonder why anyone would want to seek out the original if they hadn't already heard it.

Now, I know what a lot of people are going to ask about...all the intros and the outro.  I have made it VERY well known that I am NOT a fan of such things, and my opinion stands firm.  However...I do have to admit that when listening to this record AS A WHOLE, they are not nearly as obnoxious as the majority of intros, drop-ins, and outros that are incorporated by bands that are desperately trying to sound clever or catchy.  That is NEVER the feeling here.  The Suicide Bombers seem to be attempting to create a "sound movie" as much as anything, and the intros actually succeed in adding to the overall experience...WHEN LISTENING AS A WHOLE.  Now, if you are planning to take this record and put it in a random mix with your other sleaze faves, you are going to want to rip the tracks individually and leave these out, as they would definitely be out of place with any other piece of music they may bump up against.  But you know what?  Unlike some other recent "concept" albums (ahem, P.O.D.), Suicide Bombers does the listener a favor and makes these intros SEPARATE tracks so that you can skip them when necessary!  Thank you, thank you, thank you!  So, do I love them?  I wouldn't go that far, but I get why they were put in place, and they are short, to the point, and provide the only real break in the action, as the rest of the album is pretty much a full-throttle, balls-to-the-wall sleazefest, with only minor shifts in tempo on tracks 3 and 5.

Overall, this is one heck of an enjoyable record and one that I find myself returning to time and time again.  Excellent songwriting, top of the heap performances, tons of swagger, and exceedingly professional production make this one of the best releases of 2015 that I DIDN'T get the chance to review in time for our end-of-year list.  If I had, I can guarantee it would have cracked the top ten...it's that dang good!

Yet again, another prime example of a band from Europe...and quite frequently from Norway, it seems...that should be getting much more attention in the global hard rock scene, and one that is so, so worth tracking down!  Hit up at their website to order the CD's, which the band will even send to you with their names scribbled on them if you ask nicely!

Rating:  Ekstemt crankable, which is Norwegian for extremely crankable...I think!  Blow your speakers out with this one at 8!


Back To Reviews Index
Posted by arttieTHE1manparty at 8:56 PM