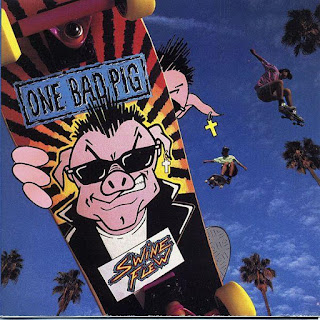 Every now and then I like to dust off a favorite of mine from my youth and give it the G2G treatment, hoping to possibly expose readers to something they may never have experienced previously.  So, in that spirit, allow me to present to the uninitiated masses one of my all-time favorite bands:  ONE BAD PIG!

Without delving too far into their storied past, One Bad Pig is a skate punk/crossover thrash band from Texas, formed in the early 1980's by Carey "Kosher" Womack and Paul Q-Pek.  The band released one demo, the humorously, yet aptly, titled A Christian Banned, before a couple of line-up changes and getting signed to a recording contract and releasing their first proper album, Smash.  (For more history, you can check out the brand new book, One Bad Pig Forever, which is available at Amazon.com, and www.onebadpigforever.com among other places.)

This album, Swine Flew, was the second label release for the oinkish punks, and for most fans...myself included...represents the most complete album in their catalog.  The band had started to experiment with more thrash (and other sounds) in their music by this time and had taken a small step away from the break-neck, sometimes sloppy but always fun pure punk of their debut album.  While this alienated the punk-only crowd to a degree, it actually opened up the gates for the band, allowing them to reach even more people and to broaden their musical scope without sacrificing who they were or what they enjoyed doing.  On a side note, this is also the last album featuring this line-up, as Streak Wheeler would leave the band and be replace by Daniel Tucheck.

The album is a collection of largely full-throttle cross-over thrash tunes, similar in style and approach to what secular bands such as D.R.I. and Suicidal Tendencies were doing at the time.  The blistering speed of "See Me Sweat", "Bowl Of Wrath", and "We Want You" was on par with the string-shredding songs of the Pig's contemporaries, with "Hey Punk" and "Thrash Against Sin", possibly going even faster than just about anything out there at the time, blurring the lines between punk and metal, and blurring the vision of anyone who tried to keep up with the speed of Owens' drumsticks or Q-Pek's pick!

But, not ones to be pigeon-hold, the band broke away from their tried-and-true mold on a couple of occasions on Swine Flew.  "Red River" starts off with some rather haunting, atmospheric sounds from Q-Pek's guitar, before settling into a Billy Idol-styled rocker that sounds to be a distant cousin of Idol's "White Wedding".  "Desperation" finds the band incorporating...GASP...rap into their sound, as they brought in MC Tommy Sims to deliver a true 80's rap bridge into the song, as he lays down his verses over some truly funkified bass courtesy of Jimmie Lee.  Definitely not my favorite moment on this otherwise stellar record, but kudos to the band for doing something Anthrax had toyed with a couple of years prior, but had done with only band members and not with the recruitment of an established rapper.  The title track has a swinging swagger to it that provides a bit of a respite from the blistering speed of the rest of the record, but it is definitely not a slow number by any means.  For that you would have to wait a few tracks, as the also attempted their first true "ballad", if you want to call it that, as "When Your Love Died" incorporates some 80's New Wave sounds into a heart-felt song about the crucifixion of Christ.  Wheeler sets a simple cadence for the song, as his bass line is prominent throughout, and Kosher proves there is more to his vocal approach than just churning his vocal cords into so much raw meat.

The band also throws in a couple of cover tunes for the fans, with back-to-back Pig takes on LArry Norman's "Christmas Time" and Petra's "Judas Kiss", even managing to score a guest guitar solo from Petra founder, Bob Hartman.  I think I can safely guarantee that Hartman had never before, and probably never since, played as fast and furiously as he did on the Pig's version of the classic Christian rock staple.

Want humor?  The Pig has that in spades, whether hearing Kosher squeal quotes from "Gone With The Wind" in the song "Big Stomach" ("Miss Scarlet, Miss Scarlet, I don't know nothing 'bout birthing no babies!"), or listening to the band name drop several the big CCM artists of the time in the great, anthemic album closer, "We Want You".

There can be no denying that in the annals of Christian hard music, there is one undisputed champion of skate/thrash/punk, and that champion is One Bad Pig.  As ridiculous as it may sound to outsiders or people who are not familiar with the quasi-underground Christian hard rock/metal scene of the 80's and 90's, One Bad Pig are indisputable legends among their peers, both Christian and secular, revered for their no-holds barred stage antics almost as much as they are admired for their uncompromising lyrical stance in an genre that is more commonly associated with rebellion and anti-religious statements.  One look at the names willing to be associated with this band, both here and on the follow-up record, I Scream Sunday, and you will see that despite how much fun the band had, they were serious about what they did and others wanted to be involved.

The CD features full lyrics, which gives the listener a chance to see the blatant, proudly bold Christian stance the band takes on each and every number here, no matter how irreverent the music may sound to some.  A black and white photo of the band, as well as a color band photo of the band are included, as are the typical thank-you's and credits.

Never officially disbanding, and still popping up from time-to-time, there are rumors of a new One Bad Pig surfacing in 2016, and I can guarantee that this guy will be near the front of the line to pick it up if it sees the light of day.

Rating:  I have never stopped loving this record and still pull it out on a semi-regular basis as my children now love the Pig!  Crank this classic to 9 and squeal along!

Back To Reviews Index
Posted by arttieTHE1manparty at 7:11 PM