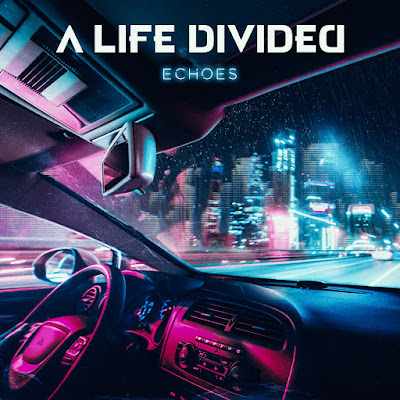 Okay.  So, A Life Divided describes themselves as "modern rock with an 80s twist".  We've all heard this before, right?  But, I will give A Life Divided credit because when they say it, they absolutely mean it!  When you put in Echoes, you are immediately transported back to the 1980s.

...its not the 1980s you are thinking of.  A Life Divided largely combines modern, dark, hard alternative rock with 1980s New Wave synth rock...and they do it VERY well!

I'm not going to sit here and type out a bunch of lies to the readers.  I like a bit of New Wave when I am in the right move.  Duran Duran, the Police, Simple Minds, OMD (Orchestral Maneuvers in the Dark, for the uninitiated), Thompson Twins, Adam Ant...all of the Pretty In Pink and Breakfast Club soundtracks...yeah, I'll admit to liking a bit of all of this, but again, the mood has to be right.  Well, I guess you could call this New New Wave (Neo Wave?), and it is actually pretty darn catchy for the most part.

A Life Divided is a perfect name for this German trio, as they incorporate the two types of music the founders really loved.  Pangger states that he "let my hair grow long and played the songs of my metal heroes on guitar", while Erik Damkohler, who is considered to be a band member as one of the primary songwriters, grew up a synth-wave fan in the 80s.  So, marrying the two sounds was only logical for the pair.  Incorporating both styles, while also adding in doses of alternative and hard rock, along with some rather...at times...dark lyrics, A Life Divided has really carved out a unique sound.

While all of the album is rather catchy in its own way, there are definitely a handful of tracks that stand out.  For starters, "Anybody Out There" rocks pretty hard, and honestly reminds me of a lot of an angrier Loud And Clear-era Autograph with the chorus lyrics of Def Leppard.  I mean, does this chorus sound at all familiar:  "Is there anybody out there?  Is there anybody there?  Is there anybody out there?  Does anybody care"?  As to the Autograph comparisons, Pangger sounds a LOT like Steve Plunkett here (and throughout the record, honestly), and that particular Autograph record used a lot more synth/keyboards than their "Turn Up The Radio" days.  Now, there are also some harsher shouts and some more modern production, but trust me, if you are honest with yourself and at all familiar with that latter day Autograph sound, you are going to know EXACTLY what I am talking about.

Another song with an obvious 80s hard rock reference point is "Servant", which for all intents and purposes completely takes the keyboard intro and guitar riff from Journey"s "Separate Ways (Worlds Apart)" and then completely changes the verse sections, lyrics, and chorus structure...but leaves a good chunk of the guitar solo in the song.  That keyboard refrain is repeated in a couple of sections in the song, and the harder-edged guitars serve as a strong counterpoint to the New Wave-styled synths and electronic drums.  A Life Divided can cut and paste the song however they want to, but the love this band obviously has for one of the all-time classic bands in the history of rock cannot be missed.  And even though I am a long-standing Journey fan, with Frontiers being my personal favorite album of their catalog, I can't even be angry with the treatment the song gets here, because it is done more out of respect for Journey than as any sort of musical blasphemy.

The album's opener, "Hello, Emptiness" also deserves some respect because it manages to merge elements of Pink Floyd with Phil Collin's "In The Air Tonight", stirred together in a dark, murky synth rock melting pot, as Pangger's vocals take on an angrier tone and the edgy guitars are used more for support in the chorus than anywhere else in the track.  Definitely a different musical tapestry that is woven here, but again, I would be lying if I didn't admit to finding it darkly catchy.

"Rock N Roll Star" has some great guitars in it, as one might expect with such a title, and the keyboard on this track has that debut Bon Jovi record feel.  Again, Pangger's vocals really have that Autograph sound to them, and honestly, I could hear this track being something that Autograph may have put together in the 90s had they stayed together and continued to put out music.

Not everything works for me, with a track like "Dry Your Eyes" sounding a bit too poppy for me, with the guitars all but removed from the track entirely.  "Enemy" let me down, as I was hoping for something dark and gritty, but instead it utilizes a synth line that sounds almost identical to the main line from "Heart Of Glass" by Blondie and then melds it to a chorus section that sounds like Stabbing Westward-lite.  Not a horrible song, but definitely one that falls into the letdown section for me.

The rest of the record is solid and fun, and I can honestly see myself popping this album in when I need a musical change-up in my CD rotation.  It doesn't threaten to become album of the year, or anything even remotely of the sort, but it is a pretty good album, all in all.  For those who openly admit to liking the New Wave sounds of the 80s (or those who only tune to Sirius/XM's First Wave when they are driving by themselves), A Life Divided is going to be well worth tracking down when it is released in January of 2020.

Again, not everyone is going to like this, and some may even question my sanity for reviewing it, let along liking it. But to each their own, I say.  A Life Divided is a nice little surprise at the end of the year for me.

Rating:  I'm not sure "crank" is the right word to use here, but Echoes earns that tag.  So...crank this to a 7, whether you want to admit to liking it or not!

Back To Reviews Index
Posted by arttieTHE1manparty at 6:00 PM