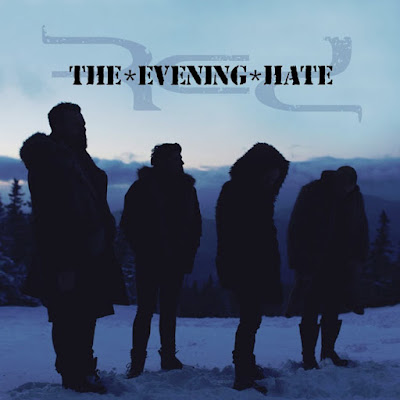 Modern metal artists, RED, have returned with a brand new EP just in time for Christmas.  Of course, to give this EP to anyone as a gift, you will either have to download and burn it, or give someone an iTunes or Amazon gift card so they can download it, as The Evening Hate EP is being released in digital format only (at least for the time being). This is a bummer, but not a defining obstacle for me, as I will definitely be burning it for myself in the highest format possible as soon as I can, as I have been a fan of this band and their alt-metal/modern orchestral metal sound since I first picked up The End Of Silence more than a decade ago.

On this new EP, the band is once again a full-time four-piece unit, as long-time session and touring drummer, Dan Johnson, has the band as a full member, joining the founding trio of the Armstrong twins and lead vocalist, Michael Barnes.  Additionally, this is the first recording for the band without the backing of a label (previously RED had recorded for Sony/Essential), as the band has struck out on their own.  Honestly, this made me a bit nervous, as many times bands lose some quality of product when they don't have the big money that labels often provide.  It turns out, I needn't have worried.

The Evening Hate finds RED in fine form, picking up where they left off with their last studio release, 2017's Gone.  Actually, now that I think of it, that is not entirely true, as this EP finds the band returning more to their symphonic approach to writing songs, which I am happy about.  While I like Gone, it lacks that something that set RED apart from so many other bands, especially on End Of Silence , Of Beauty And Rage, and Innocence And Instinct.  While not as heavily infused with programmed strings as those albums, there is a "bigness" to the sound of The Evening Hate that was missing to a large degree on Gone.  That big, epic feeling is especially felt when presented with the HUGE cinematic version of the video the band released for the title track.

Clocking in at nearly 14 minutes in length, this video is actually only slightly shorter than the three new songs released on the EP.  If you don't feel like sitting through the full 13:56 of this version, here is the much shorter, 4 minute take (but trust me...you are missing out!):

The second new, original song on the EP is "From The Ashes", which finds even more symphonic elements returning to the band's sound, including the use of some string elements at the beginning, as well as in a supporting role throughout the track, and then again in a big, emotive way on the outro.  I say "string elements" because these are most likely programmed, but their effect is not lost on the this track, as they only serve to enhance the power of  Barnes' massive voice, which delivers an emotional intensity unmatched by many other singers today, in my opinion.  Whether using his powerful clean delivery or his enraged screams, Barnes has an instantly recongnizable voice that is truly unique in metal today.  The guitars here are excellent, with big, sweeping sections that are alternately aggressive and melodic, brutally heavy and also hauntingly subtle in places, and the rhythm section is powerful, with the drums sounding especially full in the mix.

The other new song here is actually a cover, and it is an excellent choice.  "Hemorrhage (In My Hands)" was originally performed by quite possibly my favorite post-grunge rock band, Fuel.  The song was a MASSIVE hit for Fuel in 2000, spending 12 weeks atop the Billboard Modern Rock Tracks chart, hitting number 2 on the Mainstream Rock chart, and cracking the Billboard Top 30.  That's big, folks.  So, for a band to tackle such a well-known and widely-appreciated song is no small feat.  I am happy to report that the band handles it with a high level of success.  While the song remains relatively close to the original musically, it is the way that Barnes handles the vocals that is so impressive to me.  Rather than trying to ape the emotional delivery style of Brett Scallions (Fuel lead singer)...or even the way that Chris Daughtry tackled the track on American Idol...Barnes takes on the song with his own style, utilizing a stark, haunting style that sounds very much like it may have been done in a single take.  The music is largely acoustic in nature, with Armstrong's guitar carrying the song's weight here.  It will be interesting to hear if a full band version of this track is used in the live setting at some point, or if this is where the song remains stylistically as long as RED chooses to perform it.

The other two tracks on this EP are alternate takes on the two originals.  Both are done very well, and I have to admit that the acoustic rendering of "From The Ashes" is particularly interesting to me, as it really changes the dynamic of the song.  Both alternate takes are nice additions here, although I would be dishonest if I didn't say that I would sacrifice either (or both) if it meant we could get even one more new, original, full band song.

I sincerely hope that RED returns to the studio soon, and that a physical product release will accompany the next release the band comes up with.  Perhaps RED is planning to release a couple of digital-only EPs, and then to combine them into a single physical CD, which is fine with me.  I realize there is always the chance of musical flow being interrupted by such a product packaging, but I think most fans of a band...ANY band...would welcome having their favorite songs available in CD form rather than having to stream the same music.  At least the musc fans I know would prefer that...

Rating:  As I frequently state, I'm not a fan of rating singles and EPs, but in this case I feel a cranking of an 8 is not out of line.

Back To Reviews Index
Posted by arttieTHE1manparty at 9:57 PM