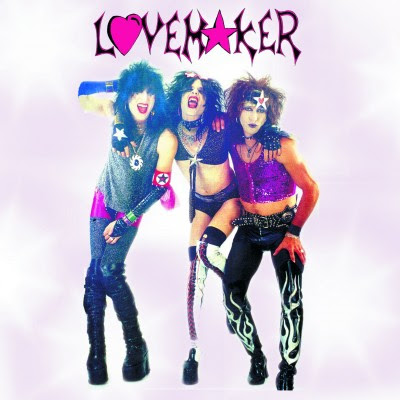 Found in the "Late To The Party" files, Lovemaker was a sleaze/glam band from New York City that was poised to make it big until the scene absolutely collapsed.  Reportedly courted at one time or another by such major labels as Geffen, MCA, Warner Brothers, Columbia, and others, this NYC trio simply peaked at the completely wrong time, for while they were still a major draw for those in the scene, the music world had moved on to grunge and alternative rock.  Fortunately, for fans of this style of music, FnA Records managed to track the band down and obtain these 13 tracks that were recorded at various times during the 90s, when Lovemaker was refusing to give up the fight.  Three of these tracks managed to find their way onto a hard-to-find independent EP on Poptown Records back in 1994, but the majority of these have likely never been heard until now.

For me, the best moments on this album are generally found at the beginning.  For example, I love the marching drum intro to "More", and the way that Teen channels his inner-George Thorogood vocals on portions of the track.  Fix has a blistering solo run on this track, as well, and the sound is pretty full despite the fact that this is only a three man band.  "Luvchild" has a 1960s rock n roll feel with 80s era guitars.  And "Sugar & Spice" has a slowed-down sleazy approach, and Teen's vocals really fit the style here, sounding like a drugged out Jim Morrison (what an oxymoron that is...).  Once again, there's a definite 60s feel to the rhythm and song structure, with 70s sounding guitars, and a simple, straightforward drum beat from Jonesin'.

A couple of later tracks are pretty catchy, as well, with "Luv NYC" being one of the strongest tracks on this entire collection.  Definitely glammy and poppy, the band sounds like a punked-up Poison with less polish.  The backing vocals and gang-shouted "heys" are particularly strong here, also.  Fix has a really good, extended guitar solo in this song, and I have to imagine that this was a big hit live, as the chorus not only fits the band's crowd, but it is a very catchy, very easy to sing chorus that surely fired the crowds up.  Likewise, album closer, "Too Damn Young", with its 70s glam style and gritty guitars, is one of the songs that I'm sure was the focal point of a Lovemaker show.  "Just Say No" again has a very 60s feel to the songwriting, reminding me a lot of the surf rock of that time, coming off a lot like something the Trashmen ("The Surfin' Bird") would play.

Some of the stuff here is pretty ridiculous from a lyrical standpoint, with "Bubblegum Lover" being right at the top of the list.  I mean the chorus here implores the girl Teen is singing to, "Put on your hairspray, Lipstick, and Stretch Rubber/I'm gonna be your Bubblegum Lover".  And "Nursery Rhyme" incorporates "Along came a spider who sat down beside her" into the chorus section, so you can kind of let your imagination roam from there.

The style is here very derivative of 60s rock with edgier guitars, mixed with the 70s glam styles I just mentioned before, with doses of punk mixed in.  Fix is an above average guitar player, Jonesin' is a competent, if not flashy drummer, and Teen proves himself to be a capable bass player, on top of handling the vocals chores of the band.  As to his singing, Teen's vocal style is something that you are either going to love or hate, as is often the case with the true glam bands that often incorporated some punk stylings into their music.  We're talking about actual glam here, not the slick, polished hair metal glam that a lot of people associate with the glam genre.  Lovemaker has far more in common with the New York Dolls, The Sweet, or Marc Bolan than they do with Poison or Warrant.  In fact, if you have ever heard Bang Gang, Big Bang Babies or maybe an obscure band like Queeny Pop Blast, you have heard 80s/90s bands that each give their own take on the glam genre.  That is what Lovemaker is doing here.  Don't think KISS, think T.Rex or even the rockier stuff that Bowie did.

If you are a fan of the glam/sleaze scene, and especially love getting hold of the bands that "just missed", then you are definitely going to want to track Lovemaker down.  If you are one of those folks who has to have absolutely spot-on, pristine production, you are likely going to be disappointed, as the sound here is pretty raw.  I'm not talking garage boombox recording sound, but definitely not big budget production.  As it is, Lovemaker is a solid representation of the namesake band and showcases the sound and effort of three guys who were just on the wrong side of time.  Had the band been discovered even half a dozen years earlier, it is possible these guys would have been pretty recognizable, especially if they were able to adjust their songwriting to a larger audience than the New York City crowd that the guys obviously geared themselves toward.

Rating:  Rock this at 6.5, with the raw production and some rather inane lyrics pulling the rating down just a bit.

Posted by arttieTHE1manparty at 12:50 PM