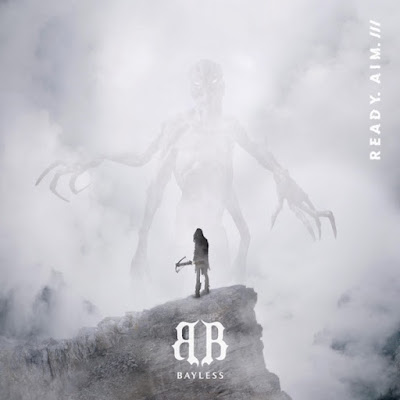 Rarely am I blown away by a band from the get-go, but Bayless accomplishes this rarity with their 2019 effort, Ready.Aim.  The husband and wife duo from Cheyenne, WY perfectly marries heavy guitars, symphonic string sections, and electronic elements, and both clean and harsh male vocals and soaring female lead vocals to create a musical tapestry the likes of which I cannot say I have ever truly heard before.  Whether Jared is utilizing his powerful baritone vocals in a rich singing tone, or snarling through harsh accompanying lines to support his wife's equally powerful, at times operatic voice, the vocal combinations here change from song to song...sometimes utilizing all three vocal styles within one track...to vocally match the intricate musical creations Bayless brings to bear on this effort.

The album kicks off with the title track, and it is immediately evident that Bayless is not just another symphonic metal band.  Vanessa handles the majority of the lead vocals on this particular track, showcasing a powerful range throughout the verses, with Jared adding his clean tones to the chorus, only adding in a bit of edge when he challenges "I'm coming for you darkness" referring to humanity's sinful nature, threatening to "take back what you stole".  Heavy guitars open the track, supported by what sound to be programmed drums and some electronic elements support the sweeping vocals, and hints of Evanescence creep forward, especially when the strings join the musical fray following the second chorus.  There's a musical buildup leading to a vocal bridge from Jared who snarls, "I'm running to the monster!  Ready, aim!"  Check out the powerful, very high quality video below!

"My Declaration" is the lead single from the record, and went straight to number one on several Christian rock and hard music charts.  Vanessa takes a lead vocal break from this track, with Jared contributing both clean and harsh vocals on this huge rocker.  Electronic elements are dropped all over this song, but as supporting pieces and not to the point that this becomes full-blown electronica.  The guitars are heavy and edgy, and Jared's voice simply owns the track.  In fact, it was this song, and specifically the vocals that drew me to hunt down this band and this EP, and I am glad that they did.  This is truly powerful stuff here.  Lyrically, it doesn't get much bolder than "My Declaration", with Jared proclaiming "I'll put my faith in who created me" before the chorus declares:  "I want to lead courageously, Leave a legacy/I wanna surrender myself./Faith awakening, Live for eternity/I'll stand with no ovation.  This is my declaration!"  I particularly like when Jared cuts loose on his vocals as he screams "Gonna face my demons, For I know that they will come/They'll here me screaming, 'The end of you has come!'"  The anger and coviction he delivers the chorus with is especially powerful, especially as Vanessa's offset the growl to add a depth and richness that simply isn't matched by a lot of bands today, as so many bands have taken on similar vocal styles now, at least in the modern rock genre.

"Save The World" is a more mid-tempo rocker with some obvious programmed lines running alongside the heavy buzzsaw rhythm guitars and some delicate keyboards.  While not quite industrial, there are some obvious influences from the genre here, and it works to great effect.  Jared and Vanessa share the lead vocals on this one, with Jared handling the majority of the chorus and Vanessa soaring through the verses.  There is a nice piano and strings interlude in the track, with just Vanessa singing for a couple of phrases before the guitars and drums return, bringing back Jared's rich singing style.  One interesting thing here is the unusual way Jared pronounces the way "proclaim", which comes out sounding more like pro-CLAY-eem the name.  At first, I was like...what the heck?  But after several listens, I have to be honest and admit that I sing along in the same way now.

"Game Over" is again largely a song with Vanessa handling the verse sections and Jared tackling the chorus portions.  Vanessa shows remarkable vocal control here, utilizing an almost operatic approach to the phrasing of the verses, and to say she is impressive would be an understatement.  There is an odd synth solo where one would usually expect the guitar solo to come slamming in, but fear not, for the guitar solo does drop, but as a final run-out at the end of the song.  Justin Forshaw, who handled the production on the record, tears his way through a complex guitar run that flashes more than he typically shows when he is ripping up the strings for his band, As We Ascend.

"No More Suffering" is another powerful hard rocker with a potent message, proclaiming "One day there'll be no more suffering/One day there'll be rest for me/But not today!", and the layered vocals on this chorus line, with Jared and Vanessa's voices paired together so perfectly, really adds an emotional depth.  This is the second single from the album, with it already cracking the top 25 of a few charts I've looked at.  Fighting for the title of favorite song on the album ("My Declaration" might win by a nose...), the song breaks down into a beautiful string section, with the two vocalists almost singing in a chorale style as they echo each other as the song concludes.  Again, the guitars are plenty heavy here, and the drums, while programmed, provide a solid rhythm line for the duo to perform their vocal acrobatics across.

"Intermission" is basically an all instrumental piece that concludes the album, so the name is rather odd.  There is some Gregorian-styled chanting at the beginning, but it is placed low enough in the mix that I can't make out what is being said, and other than Jared adding his voice as an instrument near the end (he's not singing actual words), this is song of pretty much all strings, piano, drums, and guitar, with some programmed elements shaking things up just a tad in places.

Forshaw handles the production on this album, and he deserves a good deal of credit for resisting the temptation to take things too far...in any direction.  While some may have considered burying the programmed elements further in the mix, I feel they provide an important support structure throughout this record.  And while many people would have been inclined to push the strings even further out front, the dynamics of the record would have been changed dramtically and much of the heaviness lost.  There is a near perfect mix of heavy, edgy guitars and smoother, more polished keyboards and strings, which mirror the different vocal styles incoporated throughout the five main tracks here.  My one hope for the band would be to add a drummer to the mix for the next album, as I feel that big drum sound would only serve to enhance an already remarkable sound!

Make no mistake, this is heavy stuff, both musically and lyrically, but the faint of heart need not fear Bayless, as there is also a melodic beauty and accessibility that can be enjoyed by most any fan of hard music.  This mini-album is an essential listen for 2019 and is one that people seeking something new and fresh should hunt down immediately.  I plan to track down the project's first two releases, as well, as Bayless has made that great of an impact upon me.

Rating:  A near masterpiece in my mind.  Crank this to a 9 with only the shortness of the album detracting at all from its greatness!

Back To Reviews Index
Posted by arttieTHE1manparty at 8:49 PM