LA GUNS "Another Xmas In Hell" 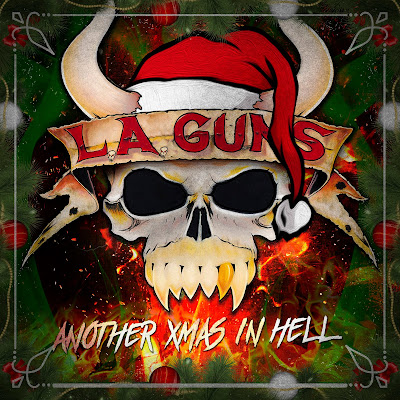 The renewed pairing of Phil Lewis and Tracii Guns continues, as LA Guns serves up a new digital-only EP just in time for Christmas!  Following the success of the pair's most recent reunion efforts, The Missing Peace and The Devil You Know (plus a live record), the group decided now would be a good time to drop this little Christmas gift under their fans' Christmas trees to hold them over until 2020, when a third reunion album is scheduled to be released.  Stay tuned for more details!

This EP kicks off with a humorous intro from William Shatner (yes, Captain Kirk) on a little section called "The Bills".  The whole thing is essentially Shatner calling up the band and leaving a voicemail for the guys, inviting them down to The Rainbow for a drink on the Strip.  Shatner humorously hints that he has some suggestions for the band's setlist,  basically pointing out that the band HAS to include "Ballad Of Jayne" and "Over The Edge", as well a more obscure song, such as "Wheels Of Fire".  For me, the high point has to be Shatner briefly reading the lyrics of "Sex Action" in that all-too-familiar voice that he plays up so well!  He also talks about having some suggestions for the Christmas EP before breaking into a brief acapella version of the lyrics to "Sex Action" once again, bfore Tracii's guitar inserts itself and the band breaks into a very abbreviated version of Billy Squire's Christmas tune, "Christmas Is The Time To Say I Love You".  There is really no verse work done on this little bit of a tune, just some jingle bells, guitars, and the band singing along to the chorus.  Pretty much useless as far as any kind of airplay, but it is humorous to hear a time or two.

The real music of this EP starts with the next track, a great cover of the Slade tune, "Merry Xmas Everybody".  The vocals are classic Phil Lewis, and while they sound like they were probably done in just a single take...possibly two...there is an undeniable sleazy charm to hearing Phil snarl across this track.  Musically, it has everything you would expect from LA Guns covering Slade:  some great guitar soloing, a bouncy rhythm line, the requisite jingle bells, and some nice gang vocals on the chorus.  I would imagine there are some rock stations that are already slinging this track into rotation to help freshen up the Christmas music rotation, and there's no way to go wrong with this track.  This is pretty good stuff, and the guys sound like they are having a ball playing it.

"Dreidel" is a punked up version of the Hanukhah classic, but it is honestly more of a drop in than a song, as the whole thing last a whopping 8 seconds and is basically the band just collectively shouting the whole "Dreidel, dreidel, dreidel, I made you out of clay", and then abruptly ending.  I am not sure if there is something wrong with the track I was sent, but it sure sounds like this was done intentionally, and, again, it would be perfect radio drop in material (according to someone who used to work in radio...namely, myself...).

"There Ain't No Sanity Clause" is up next, and since this is a cover of a tune by The Damned, you can likely guess that this is a high-speed, punked-up affair, with plenty of feedback-laden, aggressive riffing, machine gun fire drumming, and cigarette-and-whiskey vocals from Lewis.  Again, a very short track that sounds as if it was done in no more than a handful of takes, this, to me, is LA Guns at their finest, playing loud, fast, and raw.  Yeah, the guys have done some great ballads over the years, but LA Guns has always been about sleaze-punk attitude, a snarling punk vocalist paired with an extremely gifted guitar player ripping through solos that no punk band would ever allow themselves to play...and managing to pull it off and sound cool doing it.  I've seen this band numerous times in multiple versions, both with and without Tracii, and with very few exceptions, it's alway the fast and loud stuff that snags my attention when these guys hit the stage.  This Christmas punk cover is a perfect example of a band having fun and doing things their way, even if it isn't their music they are playing!

The whole thing wraps up with a cover of The Ramones "Merry Christmas (I Don't Want To Fight Tonight)".  The band simply owns this song, with Lewis doing his best Joey Ramone-meets-Elvis on the opening line of the track, before the rhythm guitars kick in and Phil is back to being Phil.  Musically true to the original, "Merry Christmas (I Don't Want To Fight Tonight)" is a great way to wrap things up, with the band having a good time on an honestly sloppily-put-together track.  I mean, even in its original form, the song often sounds like too many syllables are being crammed into too small of a lyrical space, but as with the Ramones, it works out in the end for LA Guns and brings this little EP to a nostalgic and fitting close.

Take it for what it is, folks...a little gift from the band to its fans, nothing more and nothing less.  There is not a lot of production work put in here, and as I said, it really sounds as if the whole album was likely put together in just a handful of takes.  The most effort on the entire EP was probably the work done putting together William Shatner's contribution!  But it's fast, it's fun, and it's a handful of tunes you can throw into your own personal Christmas rock mix, along with Twisted Sister and Trans-Siberian Orchestra (among others).

Give it a listen on your favorite platfom by following this link.