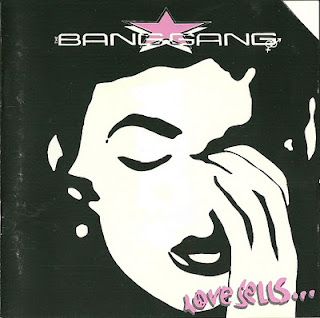 Every now and then you stumble upon an absolute gem without even trying.  When I was a DJ on the radio station for the college I attended, I ran across this album and immediately fell in love with it.  In fact, to this day, it is easily one of my favorite glam albums of all times, hands down.  Owing as much to T. Rex (who they cover) as they do to the likes of Poison or Pretty Boy Floyd, Bang Gang deliver one of the truly underappreciated, unknown albums of the 80's/90's hair scene, in my opinion.

The album starts off fast and never slows down, as "Pedal To The Metal" kicks things off in high gear then blends directly into the nicely executed T. Rex cover "20th Century Boy".  The first ballad appears next with "The Neon Fairytale", before ramping the action right back up with the two strongest songs back-to-back with the rocking "Young & The Restless" and "You Make The Beat Go On".  To my ears, there are no bad tracks here, although I could probably do without album closer "B.M.G.", which is something of a throw-away song, but at only 2:30 on the clock, it doesn't drag on and on, and hey, it's the last song so skip it, turn it off, or just start the disc over!

Plenty of hooks in this one, also, as Kristoffersen and Stevens work very smoothly together.  The rhythm section is extremely tight throughout the album, and Jet's voice reminds me at times of Steve Whiteman of KIX or Drew Hannah of Wildside at others, although he is a clone of neither.  Considering this is an indie release, the production is very good.  The booklet contains full lyrics and credits as well as additional pictures.

I've seen this disc pop up on eBay from time-to-time for about $15-$20, and this is one of the few albums I can say I would pay the top end of the spectrum for.  Also, if you can find it, the band's follow-up to this one is top-notch as well!

Back to Reviews Index
Posted by arttieTHE1manparty at 7:59 PM