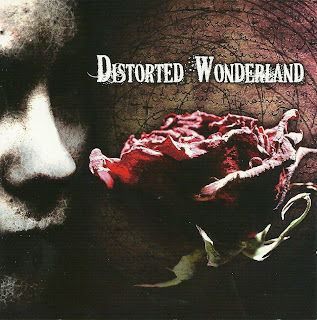 Here we go again!  Another band from Sweden...and another killer record!  This band, like so many others it seems, rose from the ashes of another group's demise.  Vocalist Lindgren and bassist Karlsson were previously in a band called Overnight Sensation (not the Finnish hard rock band) when they got the chance to sing background vocals for modern Swedish sleaze legends, Hardcore Superstar.  Not one to let an opportunity pass them up, the pair took the offer and decided they wanted to do something more in this style than their current band was doing, so they took up the Distorted Wonderland moniker for a side project.  When Overnight Sensation called it a day, Distorted Wonderland was given top priority by the pair, and I am mighty glad it did!

It's not so much that Distorted Wonderland does anything completely different than so many of the Swedish sleaze merchants of the past five to ten years, it's that they do it better!  The songwriting on this debut disc is absolutely top-notch and features some of the catchiest, stuck-in-my-head hooks I have heard in years.  As an example, as soon as I hear the acoustic-based rocker "Guillotine Babies" once, I will have the infectious chorus (and hilarious lyrics) echoing in my brain for days!  The same can be said for album opener, "Raised On Rock N Roll", whose chorus, simple as it is, gets drilled into my subconscious and niggles at my mind for hours!  These guys write some seriously addictive material that leaves you wanting to just hit repeat and start all over.

"In For A Thrill" lets the listener know they are in for a hard-charging track with the sound of a muscle car's engine revving up before the guitars take off full-speed-ahead.  "Never Had Nothing" is another killer song with its pulsing drumbeat intro, slamming guitar riffs, an almost-hardcore-breakdown moment in the middle, and snarled vocals filled with attitude; the slightly more modern-leaning "Waving The Flag" is equally as aggressive if a bit more radio friendly with its big background "aaahhhs" and slick production.  Album closer "Tangerine" is a full-on, rapidfire slugfest of a song with what is becoming the band's trademark, a catchy chorus with ever-so-slightly layered vocals.

With their connection to Hardcore Superstar, and their sharing of homelands with Crashdiet, Nasty Idols, and the like, there are bound to be comparisons drawn.  I think you can hear a little bit of all of these bands mixed together on this disc, with hints of "Dreaming In A Casket" Superstar here, combined with the snarling attitude of the Idols and the big, slick, superstar production and presentation of Crashdiet.  I still think that, overall, Crashdiet probably has the edge on these guys simply due to experience, longevity, and the chance to really hone their sound, but if Distorted Wonderland continues down this path, which is slightly heavier than the majority of their contemporaries, there really is no limit to how huge they could get.

Listeners beware, this band never slows down as there is not a single ballad to be found here.  Nothing but pulse pounding, head banging sleaze soaked metal is to be found on this debut disc that has me begging for more already.  Easily one of my top five albums of the year from 2010, I am chomping at the bit for more from these guys!

Here is the "alternative version" of the band's lead single and video "Raised On Rock N Roll"...

Rating:  Crank this one to 9.5 and then rip off the knob!

Return to Reviews Index
Posted by arttieTHE1manparty at 2:59 PM