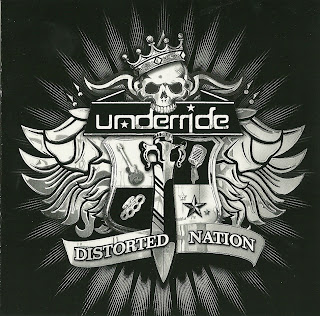 Underride is one of those rare true indie bands that manages to pull off a professional sounding release with quality songs and a sound that is still largely their own.  I have read some reviewers compare Underride's latest album to Hinder, but I think that is unfair.  Sure, there are some similarities, most notably the hard, aggressive guitars with a sleazy touch, the modern production tones, and some rather biting lyrics at times, but that is really where the comparisons end for me.  Underride is a band of their own, period.  They are not out to copy anyone.

There is one major disappointment on Underride's new album:  it has forced me to say I like a Lady Gaga song!  The band pulls off a killer, sleazed-up, rocked-out version of "Paparazzi" that slays the Gaga version (I had to look it up for comparison).  Outside of that tongue-in-cheek "dislike", there is not much about this record to be negative about.  Album opener, "Another Way Out" comes scorching out of the gate with its smoking guitar riff and big background vocals, followed by the previously mentioned "Paparazzi", which I really can't get out of my head.

One thing newcomers to the band will likely take note of are the vocals.  "Love Is Like Dying" and "Blinded By You" are two tracks that I think really showcase Rev's vocals, which are in the lower mid-range but exceptionally powerful.  Likewise, the dual guitar attack of Princess and Sixx rips off enough nasty, yet modern-sounding riffs to keep all of these songs charging at a powerful rate, even when the band slows things down ever so slightly.  The guitar intro to "Say Goodbye To Everything That's Gone" has an almost haunting feel to it until the rest of the band comes crashing in, and "Porn Star" features a wailing solo that contends with anything these ears have heard out of the American modern hard rock scene thus far.  The rhythm section is nice and tight, and the bass on tracks like "Blinded By You" and "Don't Walk Away" is sure to keep the listener's heads pounding away.

If there is anything truly negative to be said (and no, I don't inlude my Lady Gaga jest from earlier...), I would have to say I could have done without the last two tracks, "Candy Girl" and "Road To Nowhere".  Don't get me wrong, these are not bad songs, but they are old songs taken from the band's 2008 disc, "One Of Us", and I would have loved to have heard another new track or two in the mix.  Additionally, the insert is pretty bland, with not a single band picture in the entire package and no lyrics.  Maybe the band had to do this to save some money to snag the Lady Gaga song, but if they play their cards right and release this song as a single, Underride may just have a breakout smash hit on their hands!

If you are looking for the sleaze or glam of the European scene, Underride is not for you.  However, if you are looking for excellent modern American hard rock with hints of sleazy Hollywood throwback mixed in, I think it would be hard to come up with a more solid effort than Underride's "Distorted Nation".

Check the band out, order the CD, and find out tour dates HERE!

Posted by arttieTHE1manparty at 4:48 PM