RAGE OF ANGELS "Rage Of Angels" 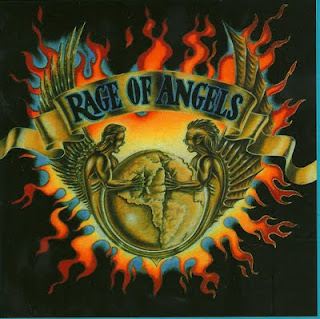 Rage of Angels is probably most famous in non-Christian circles as the band that DiCostanza and Fowler were in before they joined Steelheart.  A smaller number of fans may know Mariano's later work in a band called Pyn Siren.  But if you are one of the many fans of the hair metal genre who has not yet heard Rage Of Angels as a complete unit, I strongly urge you to do so.

In the late 1980's, the Christian metal hair scene consisted largely of...well...Stryper.  There were a few others, but not many had achieved solid label status yet.  Enter Rage Of Angels.  While Regency is not a huge label by industry standards, they were certainly a recognized label in the Christian music industry, and Rage Of Angels was primed and ready to go.  They had a great look, a couple of very talented guitar players, and a far above average lead singer, so it looked like they had every opportunity to explode.  Of course, since so many of you probably have no idea who they are, it should be obvious they did not explode.  Rather, they imploded....

There are varying versions of what happened, but the most commonly held version is that the band, which had been together since 1987, had actually broken up by the time their album was actually released.  As such, there was not much in the way of merchandise to promote, no tour to support the record, and, since the band was in effect dead, no reason to push it for airplay.  This is all very unfortunate, as this is a very solid record with several potential radio hits that would not have had to be restricted to Christian radio (mainstream radio was not as open to Chrsitian music at that time as it is now).

Stylewise, comparisons between Rage Of Angels and bands such as Skid Row, Theater or Girls-era Motley Crue, or Cherry Pie-era Warrant, are all fair.  The band never drops into ballad gear, with the decidedly mid-tempo "Are You Ready For Thunder" or "Don't Give Up" being the closest these guys come to slowing down.  Otherwise it is full speed ahead with some excellent, hook-laden rockers such as the hit-ready "Somebody's Watching You" or "Do You Still Believe In Love", either of which could have been slipped into rotation at any rock station with no one being the wiser.  Granted, some of these songs do wear a bit thin due to the cliched "Rock For The Rock" type lyrics of many Christian hard rock bands of the time; in fact, they use that very title for a song here, along with "Reason To Rock".  While many of the songs have definite faith-based lyrics, it is rumored that this was merely a gimmick that was used to attempt to garner attention for the band.  I find this a bit hard to believe, as, like I said, Stryper is the only Christian band to have any kind of real mainstream success at the time, but it is unlikely we will ever know for sure.  As it stands, if you can find a copy of this album cheap, snag it and give it a chance.  I highly doubt you will be disappointed, as many of the songs are exceptionally catchy and well performed.  Fans of Steelheart already know of DiCostanza's talent on the guitar, and that is on display on this record as well.

It should be noted that this album has been widely bootlegged.  The original Regency Records version, which mine is, has a blue border around the cover, that I have been told is missing on some boots.  I have a 2004 Brazilian bootleg from a label called Avantage Records that also has the blue border but has absolutely nothing for an insert...the inside artwork is identical to the front cover, minus the blue border.  There is also a reissue that supposedly has some demo tracks on it, but I have never encountered this and cannot verify the status of that.  Keep an eye out, folks, because this disc does not usually sell cheap with eBay prices regulary between $25 and $50...even for the bootlegged versions.

Back To Reviews Index
Posted by arttieTHE1manparty at 2:46 PM