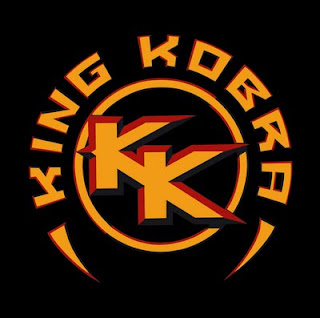 In this season of classic 80's and early 90's hair band reunions, I have to be honest...King Kobra was not one of the bands I saw kickstarting things again.  Don't get me wrong, I love the fact that they did, as I have been a KK fan for many, many years, but with the Mark/Marcie Free situation, and the fact that it had been so long since ANYTHING had been heard from the Kobra Kamp, I just didn't see this one coming.  Man, I am glad it did!

First, I want to say that the addition of Paul Shortino (Rough Cutt/Quiet Riot/Shortino) on vocals gives this album a kick in the pants right from the get-go!  Shortino's smooth, blues-soaked vocals scorch throughout this record, giving a new energy to the band that I really thought was somewhat lacking on the III album...and all but non-existant on most of the Hollywood Trash release.  Additionally, the return of all the instrumental pieces of classic King Kobra shows immediately, as this is one very tight sounding record of balls-out rockers and powerful ballads that sounds like it could have been the follow-up to Thrill of a Lifetime musically.  The guitar work is what is especially impressive here, no disrespect to Mr. Appice who, as we all know, is the mastermind behind King Kobra.  However, Sweda and Michael-Phillips just smoke on this disc in a way that is going to remind a lot of listeners of the current Whitesnake lineup of Beach and Aldrich, with their blues-groove and hard rock/metal licks melding seemlessly together.  Not to be overlooked, however, Appice and Rod lay down some great backbones for these songs and, again, the musical core of King Kobra as a unit sounds like they have never stopped playing together, as this is a smooth, tight group of musicians that obviously enjoy what they do.

It is honestly difficult to find anything truly negative to say about this album, as even the Japan-only bonus track, "Red Flags" is a great song with one of the best guitar solos on the disc.  Stand out cuts for me would have to be the smoking "Tear Down The Walls", or hard-rocking "This Is How We Roll" and "We Got A Fever", the mid-tempo "Live Forever" and "Cryin' Turns To Rain", the latter of which has an almost Whitesnake feel to it, and the ballad "Fade Away".  "Turn Up The Good Times" has a nasty backbeat, blues-based rhythm section that throbs along nicely and has the listener tapping his foot or bobbing his head almost instantly, although it is not difficult to decipher where the song is going to go lyrically, as the typical "party hearty" song (heck, that phrase is the basis of the chorus!).  Likewise,  "Screamin' For More" is another great rocker with a brilliant hook that you will have trouble letting go of, but it is not exactly overly deep lyrically, which might be one of the few knocks I can think of on this disc.  But, really, on an album that this much fun and this great to listen to, I can forgive a cheesy lyric or two.

Blindisded as I was, I have to say that as I write this, King Kobra is a DEFINITE contender for album of the year, even with the new Whitesnake, Warrant, Black N Blue, and several others either already out or soon-to-be released.

Rating:  Crank this sucker to 9.5 and put it on repeat...infinitely!!!

Return to Reviews Index
Posted by arttieTHE1manparty at 3:34 PM