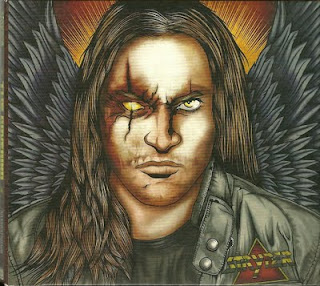 It would be difficult to find a more polarizing band in this genre, in my opinion.  Stryper has long been the whipping boy of the "no such thing as Christian metal" group, while easily being the most popular, largest selling Christian metal act of the 1980's/1990's.  Christian fundamentalist groups, on the other hand, stated that the band was actually an instrument of the devil, wearing clothing that was too tight, wearing make-up and doing their hair like women, and singing about human love and lust.  There have always been rumors that the band didn't play on their albums.  There have been line-up changes.  There have been albums where the Christian message seemed to have been watered down considerably...or possibly even left out all together.  There have been crosses made of cigarettes on album covers.  You name it, if it could cause controversy, someone has blamed Stryper for it.

Even the tracks chosen for this covers disc led to controversy about the Yellow & Black rockers, as we have songs from bands with homosexual lead vocalists (Judas Priest), rumored occult members (Led Zepplin and Black Sabbath), and by Knights In Satan's Service (KISS...duh!).  Michael even swears on one song!  And, if that isn't bad enough, on the versions you can buy in the store, the band's trademark logo and Isaiah 53:5 are almost entirely covered up by the UPC symbol!  And what's with that scarred-looking angel (demon?!) on the front of the album?

Through it all, however, if you ask the members of Stryper they have never lost their focus, their faith, or their fans. They also know who they are and where they come from, and they put it all on disply here in The Covering, which is quite possibly the best covers album I have ever heard, and I have heard a lot of them.

Covering a wide array of artists from Kansas and Sweet to Iron Maiden, Black Sabbath, and the Scorpions, Stryper pulls no punches in absolutely smoking through the twelve covers included here.  The band never tries to reinterpret the songs and make them something they are not, but they also don't completely carbon copy the songs to the point that you forget who is performing.  Michael Sweet's vocals are as powerful as ever...he even proves he can still scream...Oz Fox's leads are nothing short of amazing at times, and the return of Timoth Gaines to the bass, along with Robert Sweet on drums, gives these tracks the rock-solid, throbbing structure required to pull off some of these truly classic songs.  Additionally, Fox and Gaines have never sounded stronger with their harmonies layered over Michael's vocals.  Standout tracks are difficult to put a finger on, as all are performed remarkably well, but my favorites as of this writing would have to be "Blackout", "Heaven And Hell", "Carry On Wayward Son", Breaking The Law", and "Immigrant Song", while "Shout It Out Loud" is the one song I could say I could do without, and even that is not performed badly, it's just a song that is getting rather tired to these ears.

The truly shining moment for this disc, however, is the inclusion of a brand new rocker, "God".  If anyone had reason to doubt where the band stood in their faith, this song should lay all those questions to rest, as this track is bold lyrically and incredibly well-performed musically.  This is the first time since the band came back together as an active unit (they never "officially" broke up) that Stryper seems to reach back to the greatness of the Soldiers Under Command or To Hell With The Devil records and mix in a bit of the modern at the same time.  Michael's vocals a scorching, there is a killer solo in the mix, and even a nod to a classic Stryper track hidden in the music as well (I won't spoil the surprise).  Michael has stated in interviews that "God" is the direction the band is looking to go in on their next solo record, and if so, it is going to be a truly amazing record, guaranteed!

The packaging is pretty cool, as the liner notes are actually a mini-comic book telling the story of the character on the cover.  It is a digipack, which I hate, but I can get past that issue.

All in all, despite the fact that covers records have been done TO DEATH lately, I have to admit I really enjoy this disc and actually play it, not simply shelving it to keep the Stryper discography complete.  Add in the fact that "God" alone makes this disc worth owning, and I can't find a lot to complain about with The Covering.

Return To Reviews Index
Posted by arttieTHE1manparty at 6:15 PM