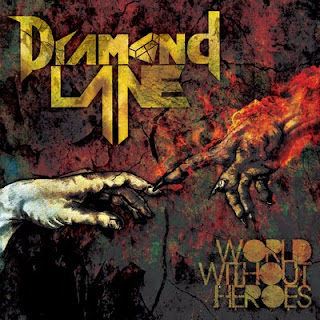 As far as the current state of sleazy hard rock and metal goes, there are basically two approaches:  the Swedish (European) attempt to almost completely replicate the Sunset Strip, and the American resurrection of the sound while intermixing modern production elements and a more up-to-date look.  Diamond Lane definitely falls into the latter category, bringing the best of the past into the 21st Century with a modern approach, much the same as bands like Hinder, Underride, and several others are currently doing.  Make no mistake, however...Diamond Lane does things their own way and they do those things well.

For example, rather than use a lower-range power-styled voice, which seems to be a trend today, Diamond Lane's Brandon Baumann tends to tread the same vocal waters as people such as Sebastian Bach (Skid Row), Derek (Babylon A.D.), or the lesser-know (and underappreciated) screamer Chris Childs of Sledgehammer Ledge.  Baumann is not afraid to cut loose with some high-pitched wails when the music calls for it, but he is also able to rein his vocals in and truly sing, which seems to be a rarity among so many front men today.

Musically, I can't say enough about the guitar work on this album as Jarret Reis handles all the leads and rhythm work himself.  He proves himself more than competent in both cases, and rips through several tasty solos, while also handling near-breakdown styled rhythm work, both of which can be found on one of the albums strongest tracks, "Time Bomb".  Also up to the task are the drummer, Jonah Nimoy, and bass player, Ray Zhang, who provide a solid foundation for the non-stop, never-slow-down rockers that fill this disc to the brim.  A prime example of the duo's work can be found on the intro (and throughout) "Heaven's Falling" which pounds in with a crushing, chugging rhythm that remains tight and consistent throughout.  "City Of Sin" has an almost dance-beat feel to it at first, again supplied by the thudding of Zhang and Nimoy, but quickly modifies itself to a sassy rocker with a catchy chorus and a really nice retro-styled solo.

For fans wanting more of a true 80's/early 90's throwback sound, Diamond Lane delivers with "Sundress City" and especially "Needle Down", which sounds like it could have fit in well on the Slave To The Grind album from Skid Row.  The previously mentioned "Time Bomb" fits this bill as well, as does the cheeky "I Know Who You Did Last Summer".  Want a bit more modern sound, while still retaining the strong leads and not-overly produced vocals?  "All Rebels Welcome", "Never Going Home", and "Endgame" are right up your alley.

Possibly the most impressive thing about this release is the fact that it is all done with no label support and, one would have to guess, a fairly limited budget.  While this may not be the most earth-shattering or genre-challenging release of the year, this is easily one of the most solid, most truly enjoyable releases I have heard so far, with no disappointing ballads or wasteful filler material.  I would be shocked if these guys don't find themselves a label home before their next album is released, nor would I be surprised to find out that this disc is picked up and repackaged by someone later this year.  It is that good.


Posted by arttieTHE1manparty at 5:14 PM