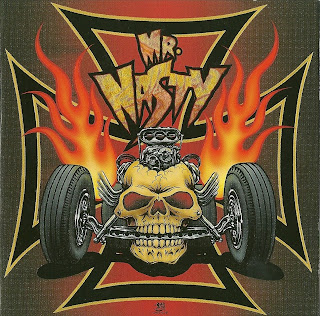 Mr. Nasty is something of an underground legend of the sleaze world.  I absolutely loved their first album, so when I heard the band had regrouped all these years later, I naturally had to hunt this new disc down.  Pleasant surprise or major letdown?  Well...a bit of both, maybe.

First, the good.  These guys still know how to rock and they have not sold out and become neo-grunge acts or arena rockers, by any means.  They kick things off in high fashion on "Rock N Roll Man", with a guitar riff that might make people think that they are listening to Faster Pussycat covering an Aerosmith song!  I absolutely love this track!  "Murder In My Eyes" is another great, Aerosmith-inspired rocker that finds Dee Dee exploring the lower range of his vocals on the semi-spoken parts.  Their rendition of "Wild World" will make people seriously wonder if this is the same song that Mr. Big covered a few years back (yep, same song...).

Now the bad...or at least the "not as good".  First, this is not a full regrouping of the band.  In fact, the only two members remaining from their KILLER debut album ".38 Caliber Kisses" are Dee Dee and Scott; Doug Banx, Tommy Jo cole, and Monti Monroe are no longer in the band.  But that's not a huge deal, as Dee Dee's voice and Scott's buzzsaw guitars are the the main draws for this band, anyway.  Second, "The Hardline" and "Moonlight Serenade" are re-recordings of songs from their second album, "The Fine Art of Self Destruction", which is a bit frustrating.  Again, not a big deal, however, as a lot of bands do re-recordings, especially so many years after their last release.  However, they don't really fit the sound of the new songs, in my opinion.  My last negative point, and probably my biggest, is that with the exception of a couple of songs, the band seems to have strayed from their sleaze roots to more of a straight-ahead 70's hard rock sound.  "Loose" as a kind of Lenny Kravitz retro sound to the guitars, and even the best tracks here have a dirty Aerosmith vibe to them (as I mentioned earlier), which is fine except that is not what Mr. Nasty was about on their first two discs.  In fact, some people accused the band of being Faster Pussycat clone at times, which would never be the case now.  It is not uncommon for older bands that come back to modify their sound slightly, and often it is because their singer has lost something in their range, and I wonder if that is not the case here.  Dee Dee would certainly never be accused of ripping off Taime Downe now, and that's fine.  Perhaps I was a bit TOO nostalgic in my anticipation with this new album.

All in all, this is a very solid record and I actually enjoy it a lot.  I just don't think of it as Mr. Nasty when I spin it.  I also wish they would have come up with another new track or two.  That being said, this disc is what it is, and I can honestly say that if the band puts out another record I will grab it up in a heartbeat.  I'll most likely just be expecting more of the sound on this disc than from discs of the past.

Back to Reviews Index
Posted by arttieTHE1manparty at 8:54 PM