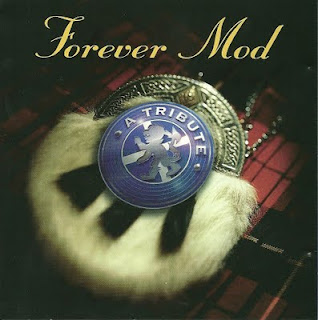 There was a time, especially in the mid-to-late 1990's that I would buy just about ANYTHING that featured members of bands that I loved from the 1980's and that whole hair/glam/sleaze scene of the Sunset Strip.  Those bands were, for all intents and purposes, dead or on life-support at the least, so to hear something by those guys you usually had to seek out tribute discs.  A friend of mine who worked in a CD store (remember those?!) told me about this new tribute disc that was out that had a lot of guys that I liked on it...but there was a catch.  It was a tribute to Rod Stewart.  I apparently had a few bucks burning a hole in my pocket, because I honestly don't know why else I would have picked this up at that time....

To be fair, this really isn't a bad tribute disc.  Now, in all honesty, I am not a Rod Stewart fan, didn't like him when he was with Faces, and don't like his stuff now.  Kind of a "never have, never will" sort of deal.  But, there is some truth to the title of this disc, as "Portrait of a Storyteller" seems to fit.  Perhaps "Portrait of a Songwriter" would have been more accurate, because Stewart had a hand in writing every one of these songs, and many are actually pretty catchy when done in a more rocking style, as most of these are.

Things start off with a rocking version of "Dynamite" which features Spike of the (London) Quireboys on vocals.  This song does a lot to get things rolling, as it is one of the hardest rocking songs on the album.  Also featuring Billy Duffy on guitar and Matt Sorum on drums, this track sucks listeners in with a hope for what is to follow.  John Corabi (Union/Motley Crue/Ratt) does his best to keep things rolling with a pretty to-the-note rendition of "Gasoline Alley", with some very good guitar work from Corabi and guitar/mandolin player, J.B. Crablick.  But then things start to stutter and stumble a bit...

The mini-Ratt reunion of Stephen Pearcy and Warren DeMartini hits a bit of a snag wih "(I Know) I'm Losing You", if only because they try to modernize the sound of the song instead of letting their familiarity with each other's styles morph this into a bit of a sleazy rocker.  Pearcy sounds very good, and DeMartini not only pulls off some nice leads but also plays the lap steel on this song, but perhaps the desire to hear a Ratt song just killed this for me.

Not a big fan of Eddie Money, to be fair, but he does a decent job on "Reason To Believe", even if it sounds like he tried to countrify the song for some reason (maybe that is how the original sounds...I'm not familiar with this song).

Things get back on track with the Robin McCauley (MSG) fronted "Every Picture Tells A Story".  Not surprisingly, Paul Shortino's bluesy vocals sound at home with the classic "You're In My Heart (The Final Acclaim)", and Jani Lane turns in a strong performance on "I Was Only Joking", which also veatures a great saxaphone solo.  Spike returns to join C.C. Deville and Joey Allen on "Stay With Me", and again his gritty vocals work well on this popular track.

"Hot Legs" is absolutely TERRIBLE, as it is basically a track done by the band Orgy and is just techno-industrial garbage to these ears.  Corabi rescues the disc from totally dying off with a spot-on performance on "Maggie May" which suits his vocal style exceptionally well.  The next two songs are not ones that I am familiar with, but Jeff Pilson handles both vocals and bass on "Rock My Plimsoul" which he collaborates on with C.C. Deville, and it is not a bad track with a soulful, funky delivery.  Likewise, I don't think I had ever heard "The Killing Of Georgie" before, but Gilby Clarke handles both vocals and guitars, and Eric Singer contributes drums to this acoustic track that is a nice, if not noteworthy contribution.

Just when I think the album might close out in fairly fine fashion, I'M'L., whoever the heck that is, absolutely DESTROYS "Da Ya Think I'm Sexy?" with some kind of techno-rap thing that is just brutal.  If it wasn't for me writing this review, I would likely have missed the surprisingly bluesy and soulful "Let Me Love You" which closes things out with Eric Singer pulling double duty on vocals and drums with Doug Aldrich tackling guitars.  I have to say, this is a GREAT surprise following that I'M'L. disaster, because Singer is a very good singer with a smokey, bluesy style that I would like to hear on its own sometime, and not just as back-up in KISS.

As tributes go, things are predictably hit and miss, but there is far more hit than miss here, and I found myself actually liking, not just appreciating, about half of the tracks performed here.  That being said, it's not likely this will ever be a regular in my CD rotation.  I appreciate the effort, really enjoy the surprises (like Singer, for example), and found a couple more artists to absolutely loath!

Rating:  Taken as a whole, play this disc at about 5, but if you can program in specific tracks, you could rock it at a 6.

Return To Reviews Index
Posted by arttieTHE1manparty at 5:11 PM