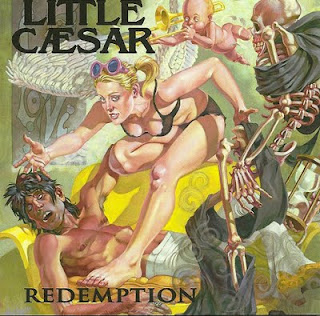 When I first heard that Little Caesar had reformed and was putting out new material, I was stoked.  I have long been a fan of the band and still think that their debut albums ranks among the underappreciated sleaze albums of the 80's and early 90's.  That dirty, almost R&B shuffle sound, Ron's easy to pick out vocals, Apache's axework...just a great, great record.

Now, I have read dozens of glowing reviews about this record...and I don't get it.  This is NOT the Little Caesar I remember and love.  Not even close.  This version of the band is missing a couple of things.  First...Apache is gone.  I haven't done any real deep internet searches to find out what happened to him, but what happened to the band is it lost its grit and its fire on the guitar.  The guitars here are pretty tame and, to be honest, rather bland at times.  I'm not saying the players aren't competent, as it is not like the album is full of off-key notes or that it is poorly played, there just isn't any soul to it, in my opinion.

Secondly, this collection of songs, for the most part, is equally soulless and tame sounding.  In fact, in listening to this record, if the band were to mix in a couple of Eagles, Skynyrd, and ZZ Top covers, and maybe an Alabama or Charlie Daniels Band song on this disc, I would feel the need to pay a cover charge and pay a two-drink minimum, because to these ears, the band now sounds like just about any band you can go to the local roadhouse and hear playing covers on the weekend.  I would have had a very hard time identifying this as Little Caesar, to be honest.  This is not hard rock, sleaze metal, whatever you wanted to label Little Caesar as in the past; that sound is LONG gone.  What you have here is a collection of tired-sounding, lifeless songs that come off as the effort of a band attempting to cash in on the current trend of 1980's and 1990's hair-era bands who have reunited to release new material.  Sadly, this is just about the worst effort of all the reunion discs I have heard, and that is saying something.

I can't say there are no good songs here, as a couple do rock at least a little bit.  "Sick And Tired" is probably the best song on the disc (and would have been a GREAT title for this effort), and "Supersonic" is decent.  The title track is a pretty good ballad that Ron sounds particularly strong on, but even on these tracks, this just is NOT Little Caesar to me.  To say I was seriously disappointed would be an understatement.

I believe this album has been reissued, as I have seen this CD with different cover art on it; perhaps some small label tried to cash in on the Little Caesar name.  The liner notes in this version are totally non-existant, as there is not even a listing of band members (that much I did hunt down on the 'Net).  No thank you's, no lyrics, no photos, no nothin'.  I'm surprised they wasted the money to make it a four-panel insert instead of a two-panel, because there is literally no reason to have paid for an extra page.

Rating:  Turn this disc down to 3, at the loudest.  Better yet, just find their debut and play that one instead.

Return To Reviews Index
Posted by arttieTHE1manparty at 3:02 PM