7EVENTH TIME DOWN "Alive In You" 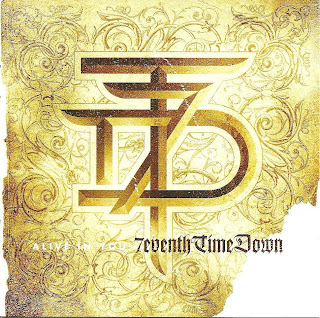 7eventh Time Down knows exactly who they are and what works for them, and they are unapologetic about it. When the sticker on the front of the album states that this CD would be a good one to recommend to fans of Daughtry or Shinedown, they are not kidding, especially on the Daughtry front. There are, in fact, times when 7eventh Time Down sound more like Daughtry than Daughtry does! I can also hear Nickelback here, especially on the ballads. So, what the purchaser/listener can expect is fairly solid modern radio rock that plays things fairly safe and doesn't do a lot to stretch the boundaries of their comfort zone, with one glaring exception (more later). This is both a good thing and a bad thing, however.

On the plus side, there is no question that 7TD is going to get some serious radio airplay, both on contemporary Christian rock stations and on open-minded modern rock radio...possibly even on satelite stations like Sirius/XM's Octane channel. The sound is that solid and that compatible with the Shinedowns, Daughtrys, Nickelbacks, Breaking Benjamins, etc. Mikey Howard has a very strong tenor that he can both sing and shout with, adding in the rougher edges when required. Songs like "I Need Someone", "Alive In You", "World Changer", "Do You Believe" and "What About Tonight" are all credible modern rock tracks that will sound right at home on your radio, with the title track really plunging into Nickelback territory on the chorus. Lyrically, 7TD does not shy away from what they believe, and most songs here feature solid faith-based (not Bible chapter-and-verse type) lyrics that at times jump into the praise and worship realm. This is especially true on songs like "Worship Jesus" and "Rusty Nails", with the first verse of "Rusty Nails" reading:

"Rusty nails in tender skin
And calloused hands of men
Pinning all that is so good
On two pieces of wood..."

This song, in particular, really shows the songwriting skill these guys have, even if it is also the least rocking tune on the disc.

Musically, the guitars are typically downtuned and fuzzed up, and the band is very tight, obviously having spent some time performing together. The leads offered up by Van Zant are bright and catchy, if not overly complex, and the rhythm playing is very well done. Miller and Williams are more than competent as a rhythm section, so the music is not a problem here, and is, once again, very comparable to most of what you find on modern rock radio.

The problem is that some of the songs come off as forced, at least to me. For example, "Jesus Machine"...I just don't get it, to be honest. Maybe it is my age showing a bit here, but the lyrics are just silly to me...

Uh, no, I guess I don't know "what that means". Were 7TD just looking for rhymes here? Also from that same song: "Faith is so bionic, You know you're gonna want it..." Ummm...okay???

"Get Me To You" has potential musically, but lyrically it is just incredibly cliche and sounds to me like a song that the band wrote at the last minute to get a full ten songs on the album. Not terrible, but nowhere near the strength of the first three or last two tracks.

The major roadblock for me (I can't even call it a bump in the road, because this just about caused me to stop altogether) is "Love Parade". This track sounds absolutely NOTHING like the rest of the album, with a funk-based style, a horn-section (well, programmed horns, anyway), and even more quirky lyrics ("I'm like a love-sick puppy, chasing you around") that just make this song an absolute skipper for me.

So, what do we have in the end? For me, this is a band that shows a LOT of promise, and they could have released a really good 6 or 7 song EP here. The production is solid, the packaging is decent, and the band obviously has musical talent and shows flashes of solid songwriting. However, the low points suck the high points down far enough that the entire project comes off as incomplete and somewhat mediocre, albeit with some nice, shining moment. I guess the fact that this disc is bargain-priced at $7.99 (at least at my local Christian bookstore) is a minor saving point, as that is about what it would cost to download the truly good songs from Amazon or iTunes.

Rating: Rock this at 6 but keep an eye on these guys if this is your style of music. I have a feeling their next effort will be a step forward.