CHERRI BOMB "This Is The End Of Control" 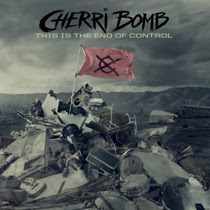 While they claim they did NOT take their name from the song by the Runaways, it is hard not to draw comparisons between that classic all-female band, and Cherri Bomb.  Four members, all female?  Check.  Everyone in the band under the age of 20?  Check.  Hard driving, sometimes borderline punked up sound?  Check.  The look, the style, the sound to become media darlings?  Check.

This IS the modern take on the Runaways!  Well...not quite....

To be fair, there are a couple of times when the Runaways come to mind, especially on tracks like the sassy garage-punk "Better This Way", and the sleazy snarling of "Raw. Real", especially during the verses.  There are also, however, moments where you feel like you could be listening to the Bangles ("Take This Now"), a female version of Foo Fighters ("Paper Dolls" and "Let It Go"), or even a Lady Zeppelin-esque band (check out the nasty riff on "Shake The Ground"!).  Album closer "Hold On" has a definite Kinks feel to it, especially with the main riff of the song.  When I go back and look at that list, it seems like the album might come off as a sonic mess, but it doesn't; it generally works pretty well, to be honest.

For me, there are a couple of real stand-outs, a few good songs, and a couple of definite filler tracks here.  For me, the stand-out tracks would be the previously mentioned "Better This Way" and "Raw. Real." which are both excellent rockers with a lot of grit, snarl, and sass to them, "Heart Is A Hole" which is a very good, solid ballad with a lot of power and emotion to the vocals and a nice, catchy hook and some suprisingly inspired-sounding guitar work on this track.  "Shake The Ground" just flat-out-rocks, as well.  Among the good-if-not-great tracks would be "Act The Part", which has a vocal that reminds me a LOT of a young Joan Jett in presentation, if not in sneer, and "Drawing A Blank" sounds like so much of what is on modern rock stations now that it doesn't really set itself apart from the rest of today's musical landscape, which is not the case with most of what is present here, but it is well executed and I like the attitude of the lyrics.  As to the weaker tracks, "Too Many Faces" is just too alterna-rock to fit the rest of the project, at least the way I hear it; it kind of reminds me of something Garbage might have done (which might make sense with Cherri Bomb listing Garbage as one of their influences).  I don't see any real point in the opening 47 seconds of the album, although "Take This Now" definitely showcases a vocal harmony that, as I stated early on, reminds me a LOT of the Bangles.  I'm also not particularly enamored of "Sacrificial Lamb", and I can't really put my finger on why except to say it sounds kind of incomplete for some reason, and I don't like the effects that were applied to the vocals here.  Maybe the incompleteness is some of the immaturity of the band, as this is one of the songs that is credited to Cherri Bomb as far as songwriting.  Also, this is another track that takes on that buzzing sound to the guitars (or maybe its some form of keyboard work) that Garbage made popular a decade or so ago, and I just don't think it works here.
Generally speaking, while a bit of the raw attitude of the Runaways is not present here, I think the overall musicianship and sound quality is actually ahead of where Joan Jett, Lita Ford, Cherie Currie, Jackie Fox, and Sandy West were at this same point in their young careers.  Cherri Bomb is generally a much tighter unit with their sound, and I think their guitar playing is quite a bit ahead of where Ford was on the Runaways' first effort.  When the vocals are left alone, I like the sound quality a lot, so I hope they continue in this vein and don't spend a lot of time, if any, exploring that effects-laden sound that is present in a couple of spots here.  The song structures are short and simple for the most part, with seven of the twelve tracks checking in at 3:00 or less, and that serves the style and attitude of these young ladies very well; when they get a bit long-winded, such as on "Too Many Faces", things tend to drag a bit (the exception would be the one true ballad here, "Heart Is A Hole").

These girls have definitely got a chance to really fill the all-girl band niche that hasn't been thoroughly explored (exploited?) since bands like Vixen rode the airwaves to at least moderate stardom.  With the guidance of former Hole member (and Motley Crue fill-in) Samantha Maloney, as their manager, Cherri Bomb have a significant leg up on other young acts as Maloney should be able to help her young charges navigate the treacherous waters of the music business.  They do need to work on crafting their own songs (they only wrote two of the tracks on this album, whereas Andy Dodd wrote 7 of them), but if these four can keep their egos in check, manage to maintain their friendships, and continue to grow as musicians, the sky may truly be the limit for Cherri Bomb.

If you like what you hear, join their "Bombsquad" at www.facebook.com/cherribombband

Rating:  Crank this to a pleasantly surprising 7 and keep your eyes on these young ladies as their star rises...

Back To Review Index
Posted by arttieTHE1manparty at 8:20 PM