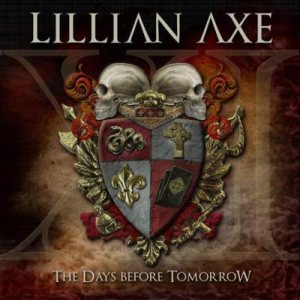 Lillian Axe is one of those bands that you just really can't pigeonhole.  On the one hand they definitely have their history as something of a hair band, although musically they were always a step or two ahead of most of the other hair bands they were lumped in with and, ironically, had less commercial success because of it (at least in my opinion).  They were never a band to sing about the virtues of partying non-stop day and night, and as such, never really had any of the commercial radio anthems that propelled some one-or-two-hit-wonders to instant fame in the 80's and very early 90's.  On the other hand, Lillian Axe held a bit of a progressive-power metal edge a lot of their peers also never had (or at least didn't display on record), starting with their BRILLIANT sophomore album Love & War.  I one time steered a friend of mine towards Lillian Axe's Psychoschitzophrenia album as being something of a "Queensryche-meets-Savatage", which he came back fully agreeing with.  Granted, the band does not always fit into this mold, but again, this is the enigma that is Lillian Axe.  Just what kind of band are they?

Well, for one thing, Lillian Axe is a band that is always in some sort of flux, at least as far as revolving band members go.  Blaze is the only original member of the band left from their self-titled debut album, and Jones is at least the fourth lead vocalist in the 24 years since their first album (Ron Taylor was the original vocalist, followed by Derrick LeFevre, and then Ronny Munroe [now with Metal Church]).  Despite that fact, Lillian Axe has always sounded like Lillian Axe for the most part.  Sure, there have been growth spurts stylistically, such as the jump between the debut and Love & War, or in the continually more-progressive sound the band adopted following the fourteen-year lay off between 1993's Psychoschitzophrenia and 2007's Waters Rising (there was a live album in 2002), but generally speaking, you can pick a Lillian Axe album out of a line-up of their peers fairly easily.

XI: The Days Before Tomorrow is a continuation of the ever more progressive attitude Blaze has employed in his songwriting for the past fifteen to twenty years.  If you are at all familiar with the sound of Lillian Axe, then this album is going to feel familiar and comfortable musically, and Jones' voice, while not the one you might be expecting, certainly fits the mood and feel of the album and greets you like someone you are sure you have met before.  Right from the opening track, "Babylon", there is no doubt that Jones and Blaze are on the same page musically, as this driving track gets things started in pure Lillian Axe rocker fashion featuring a big, chugging guitar riff and a nice, melodic solo.  The progressive attitude shows up in the very next track, as "eath Comes Tomorrow" features more of that "Queensryche-meets-Savatage" sound that I mentioned before, especially with the opening guitars leading directly into some nice piano work, with Jones' rich tenor gliding over the top for the first verse, provoking the guitars to kick in once again in a very 'Tage style.  "Gather Up The Snow" is the closest to pure prog-rock that Blaze allows his band to go, and even then it stays closer to Queensryche than Kansas, Yes, or Asia or anything like that.  There is also a killer guitar solo embedded in this excellent song, showing Blaze to be an underappreciated player of this genre.  "Bow Your Head" is an impressive ballad that allows Jones to expand his vocals a bit, adding a hint of snarl in spots, soaring in others.  "Take The Bullet" starts off with a machine gun sound effect, but then carries on with a stop-start rhythm and some interesting vocal layering that again gives a progressive feel to this modernesque hard rocker which has some excellent fret runs nestled within.  "The Great Divide" is very atmospheric in places, but this is also a song that gives drummer Koudelka a chance to showcase his skills, which I think is a cool touch.  "Caged In" is pretty much a straight ahead hard-rocker, while "Soul Disease" has a galloping Iron Maiden feel for much of the track, again intermixed with hints of Queensryche.

The hidden bonus track, (which would actually be track 16 on the CD, as there are 5 blank tracks after "My Apologies") is an oddity and it is easy to understand why it was inserted as a bonus.  This song doesn't fit anything else on the album and it has a very atmospheric-yet-almost-electronica feel to it, as there are no drums, no real guitars, and just Jones vocals over a synthesizer track.  The album would have been just as well served to not have this track included, but it doesn't damage the overall brilliance of the record, either.  I'll likely skip it 95% of the time, however.

This new Lillian Axe album gives hope that things on the musical scene are not all cookie-cutter clones of the modern breakdown-laden, melody-lacking bands that are churning out what passes for hard rock these days.  Sure, there are some great bands out there doing some original stuff, but you have to admit there are a LOT of bands that flow into each other without the listener even knowing the band or song changed!  That is not the case with Lillian Axe at all.  If you are looking for something to restore your faith in well-written, well-executed music with one foot in the past and one solidly in the present, Lillian Axe's XI: The Days Before Tomorrow may be just what you are looking for.  Check it out and see if you don't agree...

Posted by arttieTHE1manparty at 12:00 PM