ZEROKING "Kings Of Self Destruction" 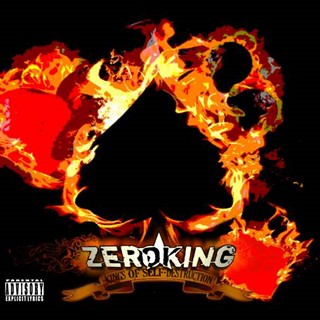 Where the heck have I been that I missed Zeroking?!  This is the CD that I feel like I have been looking for for quite some time now!  These guys manage to take the look and feel of the 80's and blend it with a chunk of the modern rock sound, while also maintaining a sense of melody, groove, and a bit of the dirty raunch of bands like Guns N Roses, Motley Crue, and LA Guns in much the same way Hinder, Underride, and Buckcherry have managed to do!  Understand, they don't sound clones of those Sunset Strip bands, at least in the version that we know now, but I have a feeling that this is what those classic bands may have sounded like if they had been born in 2003 instead of 1983.

Things kick off in a HUGE way with the insanely catchy "Dead Rockstar", which features some incredibly sassy vocals from Haught, who also contributes a deeper, snarled "you wanna party like a dead rockstar!" on the chorus, which works to great effect.  Dropping names like Prince, John Lennon, Hank Williams...and Ice-T?...into the lyrics is a cool maneuver, especially in the way its pulled off, and really sets the tone for the attitude most of this record will carry through to the end.  To be honest, this song alone kept me from getting this review done for quite some time as I had a very hard time getting to track two without repeating "Dead Rockstar" for the fifteenth or twentieth time.  This song is just so infectious that it was a difficult task moving on. Somebody needs to explain to me why radio stations and satelite stations aren't playing this song in heavy rotation NOW (of course radio would need to edit out the couple of f*bombs present in this modern sleazefest...).

Once I did manage to get to the next track, I was taken aback just a bit, as "Forget Vegas" has a horn section (keyboards, I am sure) that gives it an almost ska feel, with a definite alternative pop-rock vibe to it, but maintaining a heavy bottom end that won't cause most G2G fans to stray.  Things get back on the more straight-forward rocking track with the modern hard rock sound of "She Said" which should be all over rock radio...but isn't!  In fact, there is no reason that "Dead Rockstar", "She Said", "Stone Cold Bitch", and even the Hinder-esque "Southern Lady/Ex-Godiva" with its heavier, more modern southern swagger, aren't all gracing the airwaves or the satelite radio realm (pay attention Sirius/XM!), as all are of equal or better quality than 90% of what is currently being passed off as good music today.  There are also a couple of great ballads here, with "Valentine" being a hauntingly melodic effort that combines piano and strings to great effect, along with an interesting guitar solo, an interesting combination that I think gives the track a different feel than many other "atmosphereic" pieces by other bands.  "Love Is Dead" is a similarly effective ballad, although this time it is due to the powerful addition of Stacee Lawson's vocals to this duet that should be heard by anyone who is a fan of the updated take on the power ballad.  Lawson will likely draw comparisons to a younger Stevie Nicks on this track, but I don't think that comparison does Lawson justice, but perhaps that is because I have never been a Fleetwood Mac/Stevie Nicks fan, per se.  Other stand-out tracks include the bottom heavy raunch-and-roll of the title track, "Kings Of Self Destruction", the more alt-rock leaning, yet still heavy, "Black Friday", and the attitude-infused "Showtime Revolution".

To be fair, not every track here is a 100% out-of-the-park homerun.  In particular, I think the album closer, "Leaving Los Angeles" is too long and too much in the vein of something Sixx A.M. might have done, particularly on their first album.  Don't get me wrong; I like Sixx A.M....I  like Zeroking...they just don't fit togehter that well, at least on record.  It's not a terrible song, it just doesn't fit the flow of the rest of the album (which is probably why it is the last track here), and, again, at over 6:30, it starts to drag by the end of the track.  The lack of fit definition can also be applied to "Girls Of California", which I found to be the most modern rock sounding of all the tracks here (although it does come complete with an 80's lyrical mentality about sex, drugs, and hot California chicks...).  It should be noted neither of these songs classify as skippers, by any means; I just feel that they are not as solid as the other tracks.  "The Party's Over" also fits into this category:  not a bad song at all, just not one I would give to a friend as an example of what this band is all about or brings to the table (pure 80's fans, take note, this is probably the most "throwback" sounding of all the tracks here...).

There are three iTunes/Amazon mp3 bonus tracks, which I didn't list above, simply because they are just alternate takes on songs from the main album.  There is a studio outtake of "Valentine", a live-acoustic version of "Stone Cold Bitch" (which really did nothing for me), and the single edit version of "Girls Of California" (which I would not pick as one of the first five or six songs to release as a single...but who am I?).

Overall, this is one excellent record and one I would encourage all Glitter2Gutter readers to snap up.  The packaging is also top-notch, complete with lyrics, liner notes, thank-you's, etc.  Whether you are an old school 80's rocker or a more modern hard rock fan, you are sure to find yourself caught up in the rauch-and-swagger of this West Virginia outfit.

Rating:  CRANK this sucker WAY UP!  Easily a crankable 9!!!

Back To Reviews Index
Posted by arttieTHE1manparty at 9:53 AM