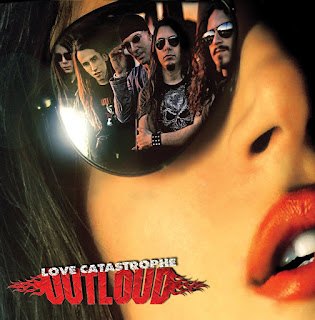 
Outloud is the perfect example of a band that could have done very well in the late 80's/early 90's hard rock scene, as they have a solid grasp on the style and sound of that era, although they have brought it into the modern day with updated production, which is a good thing.  Formed by Katsionis, who is the keyboard player for Firewind, and Mogel, the vocalist for Talon, Outloud combines some pretty crunchy guitar, solid songwriting, and some excellent hooks into one of the sleeper hits of 2011.  It's a shame more people didn't have the chance to hear this record, as I am sure it would have found its way onto several Top 10 of 2011 lists...

Things start off with a bang, as "We Came To Rock" is a pounding rock number that really encompasses everything this band brings to the table.  The guitars, especially the leads provided by Mr. Kash, are the driving force behind this rocker, but everything works here, from the bouncing bass line to the punchy drums...heck there's even a pirate introducing the track (give it a listen...you will hear what I am talking about!).  The vocals are not the piercing, hich scream that a lot of bands have been trying to bring back, nor are the they the sappy, whimpy, pouty sound that other bands seem to be latching onto.  Mogel's voice is just straight ahead hard rock with a solid tenor range and just a hint of sass and snarl, similar to what Sebastian Bach used to such effect on the Slave To The Grind release from Skid Row.  By no means is Mogel a Bach clone, but the style and attitude he uses are definitely reminiscent of Bas at his best.  However, as strong as this song, and Mogel's vocals, are here, things only get better, as a party anthem like this one pales in comparison to the melodic greatness Outloud unleashes following this song.  In fact, by the time you get to the end of this disc, "We Came To Rock" comes off as almost silly and out of place, because even though it is a solid number, it is NOT what Outloud does best.

"Falling Rain" is what this album, and this band in general, is all about.  Here Mogel gets to stretch his emotive vocals, letting his voice become an instrument that plays along side the rest, and to great effect.  The guitars, once again, soar along, carrying the track, and the HUGE chorus will have listeners singing along almost instantly.  Even the keys, which we all know I am not a fan of, are used as a complimentary instrument here, rather than becoming the dominanat feature, which just lifts the song a bit higher, if possible.  This is what melodic hard rock in the current world should sound like!

From this point on, it is just one melodic masterpiece after another.  "Live Again" kicks up the speed just a bit, especially with the drum work and the scorching rhythm guitar, but the hooks and melody are still solidly in place, and Mogel continues to impress vocally (I wish Talon had sounded this good!!).  "Waiting For Your Love" kicks off with an acapella intro before the guitars and drums come crashing in on this track which was the lead single and video from the album.  This track has a bit of an arena rock feel to it, especially the vocal production and the more 70's styled guitar line (think harder-edged Kansas, for an awkward comparison), but this is not a retro-rocker by any means, as the melody keeps the song firmly in melodic hard rock territory.


Of course, a melodic gem like this album couldn't get by without a slower number, and "Isolation" delivers in a big way.  While definitely not what I would call a ballad, Outloud does slow things down a touch here, but that doesn't detract from the power of the song or the brilliance of the performances, especially Kash's guitar playing.  This guy is seriously underrated, in my opinion, and he plays this style better than just about anyone that comes to mind from the current crop of guitar-gods-in-waiting.  The band does some quirky production things to Mogel's vocals in a couple of places here, as they incorporate "auto-tune", or whatever all those R&B wannabes use when they can't actually sing.  It's an effect which annoyed me so much at first that I thought there was a glitch in the recording, but after repeated listens, I find that it doesn't bother me nearly as much now and my ears just kind of glide over these couple of minor hiccups, as this is a great, great song overall.

"Clean Hands" returns things to more a metal-tinged melodic hard rock, and "Love Catstrophe" closes the album out in fine melodic rocking fashion, (although I think the atmospheric intro is too long), featuring one of the best guitar solos on an album filled with six-string greatness.

One of the most impressive things, at least for me, is that Katsionis has allowed the band to be the focus here, and has not tried to overdo the Euro-metal style of the popular Firewind, or keyboard playing that he is known for, dominate this release.  Outloud never feels like a side-project and Katsionis seems perfectly content to play "second fiddle" on guitar here, allowing Kash to rip off solo after solo while Katsionis maintains a solid handle on the rhythm playing here.  Kudos to Katsionis for sacrificing personal performance to make Outloud the truly great band that they are!

Overall, there are no bad songs here, and, as I stated earlier, the first track ends up being the weakest simply because it somes off as cliche and out of place, not flowing with the same melodic style as the rest of the disc.  To me, this is somewhat humorous as  lot of bands would kill to have "We Came To Rock" be the best track on their albums as opposed to the weakest track, as it ends up being here.  Outloud is a band that people need to keep their eyes and ears open for, as BIG things are going to come from this Greeek outfit if there is any justice in the music world!

Posted by arttieTHE1manparty at 9:15 AM